"Die Hard on a..." Showdown: Under Siege VS Sudden Death 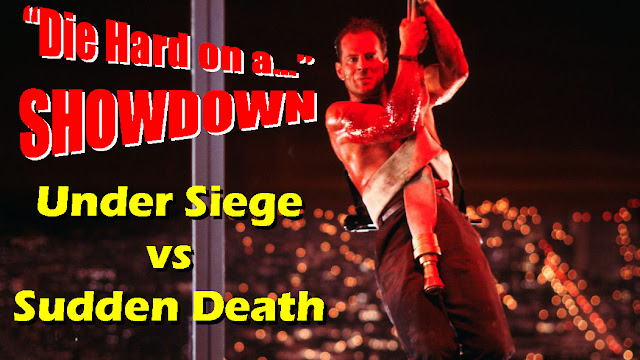 "A navy cook and a fire captain go head-to-head with terrorists in the action 90's. Who will be the winner?"

Most action stars took a stab at the Die Hard-style action film, primarily in the 90's. In fact, the 90's was the decade where this specific type of action film; the terrorist taking over "whatever", was prominant. Keanu Reeves did it with Speed (1994), Wesley Snipes in Passenger 57 (1992), Ken Wahl in The Taking of Beverly Hills (1991), and Stallone in Cliffhanger (1993) just to name a few. And then there are the low-budget ripoffs, which are also great, like Anna Nicole Smith's Skyscraper (1996) and the Shannon Tweed starring No Contest (1995). In reality, no action star could get away with "NOT" making one of these, especially since they were so damn popular and guaranteed moneymakers.

Today I bring you Steven Seagal and Van Damme's Die Hard films; Under Siege (1992) and Sudden Death (1995). What makes these two films exceptionally special is that these two were going head-to-head at the box office as the 2 leading martial arts/action stars at the time, always trying to outdo each other and remain the top marquee name, much in the way Stallone and Schwarzenegger had done for decades. Little did these guys know that they were already nearing the end of their box office star power. Van Damme's last starring theatrical release in the U.S. would be just the following year in 1996, while Seagal's would be able to hold out a little longer, with 2001 being his last starring theatrical release with Exit Wounds. But in the early to mid-90's, these action giants were delivering some great films, and these two would mark their entry into the "Die Hard on a ..." genre. Let's dig in. 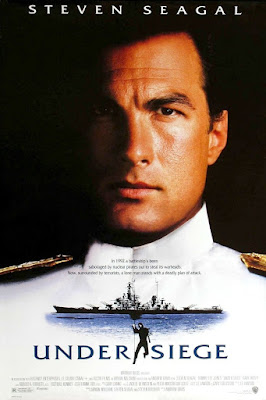 Seagal actually beat JCVD to the punch with Under Siege in '92, here re-teaming with his Above the Law director Andrew Davis (Code of Silence). Under Siege, which is "Die Hard on a ship", is a great film if I'm to be completely honest. In fact, it's considered to be by most action fans Seagal's best and strongest film. And I'd have to agree. But what's a bit surprising is that Seagal does very little actual fighting in this. So really, almost any action star could have starred in it. There's nothing in this particular film that utilizes his specific set of fighting skills, which might surprise most people. Oh there's action, make no mistake. But it usually comes in the way of shootouts, explosions and a knife-fight. All that is fine really, and Seagal does a decent job in the lead as the badass head chef of the navy ship who doesn't take orders from anybody other than the captain. But shockingly, he's not the reason to see this film. Because unlike any of his previous releases, it's the supporting cast in this one that really seals the deal and makes it worth watching.

For starters, there's Gary Busey in all his unhinged glory. While insanely busy around this time, putting out about 5 films a year, it was just the year before where he would deliver one of his more memorable roles, that of Pappas; Keanu Reeve's partner in Point Break. I'd have to say that this is also a solid standout for him. Just watch him dress up as a woman dancing around the ship to catch my meaning. Tommy Lee Jones joins the fun as the main terrorist bad guy, here hijacking the navy ship with his small army intending to utilize the nuclear missiles on board to decimate Hawaii just because he's sour. The rest of the cast is rounded out with a slew of notable character actors that did a ton of these action films in the 80's and 90's, including a "blink and you'll miss him" Bernie Casey, who literally only pops in for 2 scenes and is severely underused. Oh, and the luscious Erika Elaniak costars as a stripper for hire who gets caught in the middle, who also manages to have just enough time to appear nude (YES!). 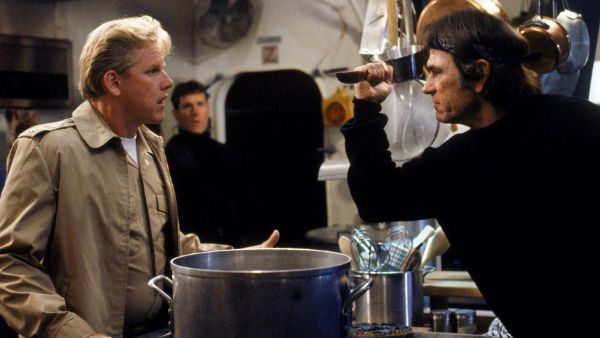 The film moves along at a breakneck pace, and combined with the excellent supporting ensemble cast, which is quite large to be honest, Under Siege delivers the action goods. Director Andrew Davis, who would follow this up with another box office hit, The Fugitive, again re-teaming with Tommy Lee Jones (who earned an Oscar nomination for that role) handles the action well. Nothing flashy, just solid and straight to the point. Did it need to star Steven Seagal? Certainly not. It would have worked fine with any other big name in the lead because there's nothing about Under Siege that would justify his casting, but lucky for him, it ends up being one of his best films. 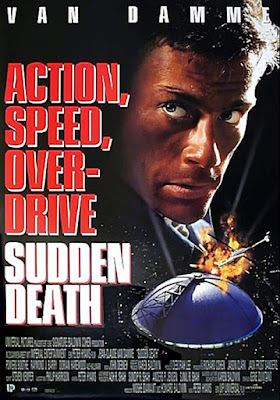 JCVD was riding high right up to this point. His only real misfire was the previous year's Street Fighter: The Movie. But that's really just a matter of taste. I happen to love it because it's so cheesy, and so much fun. But financially, it was a critical and box office disaster as well as a troubled production right from the start that has gained legendary status as one of the most fascinating behind the scenes stories ever. Let's just say that JCVD was not on his best behavior on set. If you care to read about that massive trainwreck and the hell that writer/director Steven E. de Souza went through in trying to make it, check out this fascinating article that chronicles everything that went wrong in detail. It's a blast to read. But fear not! Jean-Claude would recover with this killer flick, Sudden Death, his "Die Hard in a sports arena".

Here he re-teams with his Timecop director Peter Hyams, one of my all-time favorite filmmakers, and the result is another winner for both JCVD and Hyams. JCVD plays a fire captain working the local skating arena during a big hockey game when it's taken over by terrorists, led by the ultra-cool Powers Boothe, who has a bone to pick with the FBI. JCVD must not only find his son, who disappeared in all the craziness, but must also prevent a bomb from going off in the city. I would have to say that this is probably my favorite JCVD flick. It's got everything you'd want in one of these "Die Hard on a ...." style films and Hyams shoots it all with such class. In fact, compared to Under Siege, on a visual level, this looks far more like a Die Hard film.

Another area that one-ups Under Siege is that unlike Seagal, JCVD actually does some fighting in this one. Sure you notice the body doubles, and it's not a whole lot of fighting, but it's a Van Damme flick through and through. It's got action, fighting, killer stunts and a terrorist. The terrorist by the way is the one and only late-great Powers Boothe, who, much like the villain in Under Siege, is a disgruntled former employee looking for revenge. But man he can play it classy and evil at the same time like nobody's business. Speaking of Boothe; he and Raymond J. Barry, who plays the kidnapped Vice President in here, both also appeared together in Brandon Lee's Rapid Fire 3 years earlier in 1992. Now that I think about it, Powers Boothe and Brandon Lee are both gone. Damn. 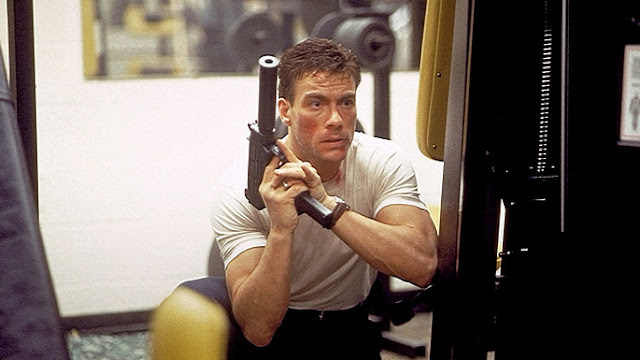 Ultimately Sudden Death, along with Timecop, is one of Van Damme's most accomplished films. It's such a slick looking action film, the kind they rarely make anymore, where the director took the time to set up nice shots, and everyone is bringing their A-Game to the table. It's a skilled accomplishment on both Hyams and Van Damme's resume's, and hands-down one of the best "Die Hard on a..." films out there.

FINAL THOUGHTS:
Man, this is a tough one. Under Seige is Seagal's most polished film to date, and though there's very little actual fighting, it does deliver in the "terrorist taking over..." department. While Seagal is being his usual Seagal (zero range), it's really the insanely strong supporting cast that brings this one to life. Gary Busey, Tommy Lee Jones, Bernie Casey, Erika Elaniak, and a huge ensemble cast of notable character actors and bad guys from the 80's and 90's all lend a hand at making this one a nonstop thrill-a-minute blast. There are no real memorable moments that stand out, but it's at least consistent with the action and tension.

Sudden Death on the other hand, while not delivering nearly the same amount of action, offers up an equal amount of entertainment in other ways. Unlike Seagal in Under Siege, Van Damme does a lot of fighting, with the most memorable moment being his fight with a mascot in the kitchen that's badass as much as it is ridiculously hilarious. The film plays on all the Die Hard elements beat for beat in a classy way and writer/director/cinematographer Peter Hyams does a phenomenal job giving the film a far better aesthetic than you'd ever expect for a film like this. Compared to Under Siege, this looks more like a Die Hard film. In fact, it's one of the best Die Hard-style films out there in both it's execution and entertainment value. While Van Damme isn't necessarily a better actor than Seagal, he does present far more range and that definitely helps. 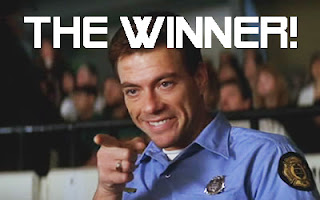 VERDICT:
I'd have to go with Sudden Death. It's a much better looking film all around. JCVD isn't trying to play it cool here. He's a man who's trying to rescue his son, and goes through hell to do it. All of the emotions that go along with that are plastered all over his face and it makes a huge difference. There's more fighting, and  more thrills because Hyams and writer Gene Quintano take the time to realize the repercussions and effects of certain actions, making them more real and palpable. Plus, it's such a visually impressive film all around and I can watch it just for the visuals alone. Sudden Death takes it's time setting the situation up, and in doing so, gets us all invested by the time the shit hit's the fan. It doesn't bring anything new to the table, instead sticking to all the standard tropes within this sub-genre, but doing it all the "Peter Hyams On Fire" way. Hyams was a master at making his films look incredible, every so often making some of them better than they had any right being (The Presidio comes to mind). But that was his gift, and if a film was directed by Hyams during the 80's and 90's, you can guarantee it was going to be great, and this one was greeeaaatt!!
Posted by robotGEEK at 1:54 PM