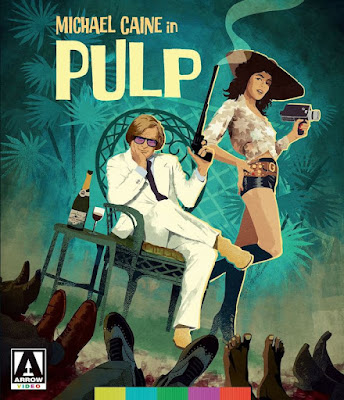 A year after writer/director Mike Hodges and Michael Caine made the genre-defining Get Carter in 1971, they re-teamed for a long-forgotten slice of Pulp Fiction titled Pulp. While this film didn't get quite the same response that Get Carter did, it's not any less entertaining either. I'm sure a lot of it has to do with the fact that audiences didn't quite know what to make of it at first. While Get Carter is a gritty, hard-edged revenge thriller, Pulp takes a complete 180 on similar material, giving it a more light-hearted approach, complete with clever dialogue, sight-gags and a strong dry wit humor that might not connect with everyone. And to be honest, you really have to know what type of film you're getting into to truly enjoy it. But make no mistake, it's a highly enjoyable slice of pulp fiction if you can accept it for what it is. So let's dig in.

Michael Caine stars as Mickey King, a sleazy pulp novelist who goes by various pseudonyms having written such novels as My Gun is Long and The Organ Grinder. When he's hired by former movie star Preston Gilbert (Mickey Rooney), who was big in gangster flicks for a time, to ghost-write his autobiography, King is sucked into Gilbert's real-life gangster connections and all the trouble that comes along with it. King soon discovers that he signed on for more than he bargained for.

Caine plays Michael King with such a large air of sarcastic and somewhat arrogant confidence that it's hard to tell whether you like him or not. While he is originally hired to pen a novel, an autobiography of a former aging movie star, he ultimately becomes a sleuth as he gets caught up in numerous assassination attempts and mistaken identity as he tries to figure out who is trying to kill him and why. There's a colorful cast of characters from all over the world, including the gorgeous Nadia Cassini, who acts as a sort of assistant to the bullishly rude and narcissistic former Hollywood star Preston Gilbert. But the real standout is hands-down Mickey Rooney as the aging former movie star. He's so over the top, surprisingly brutish in his small size, and awkwardly hilarious all at the same time that he steals the show every second he's on screen.

Ultimately, though a bit uneven at times, this early 70's British whodunit is a clever, sometimes unconventional, gangster/thriller/comedy/drama/crime caper that throws a lot of visual narrative at you courtesy of writer/director Mike Hodges (Flash Gordon) strong compositions making full use of it's 70's aesthetic. The humor doesn't always land, but the performances, tight dialogue (Caine narrates the film as well in a somewhat gumshoe way) and constant location changes make it an entertaining endeavor.


Arrow did an excellent job on this transfer, giving it a brand new 2K scan from the original film elements, supervised by the film's Director of Photography Ousama Rawi. The bright bold colors of the early 70's time period pop in every single frame and it's a strikingly retro piece of pulp filmmaking. Visually, it's about as vibrant as it could possibly get and it looks amazing. The audio is strong (1.0 mono) as well, and it needs to be since Caine is narrating the entire movie. For the hard of hearing or deaf, there are also English (optional) subtitles. Really, the picture and sound are superb from a technical standpoint.

If you're a fan of the film, you'll also want to be sure to dig into the brand new interviews with writer/director Mike Hodges, DoP Ousama Rawi and assistant director John Glen. Very insightful and entertaining. The extra's are rounded out with the original theatrical trailer and newly commissioned cover art by Nathanael Marsh.


If you would like me to review a Blu-Ray release or film, please feel free to contact me at jasonisageek@yahoo.com

Posted by robotGEEK at 4:32 PM