I don't know if it's just me, but Netflix doesn't really seem to be much of a movie channel for me anymore. It just feels like all I ever watch are documentaries, original series and comic book shows, and that their movie selection is becoming less and less interesting. Good thing their documentaries are good, such as this engrossing behind the scenes look at Jim Carrey's full-on embodiment of the late-great comic Andy Kaufman, whom he portrayed for the Milos Foreman biopic Man on the Moon back in 1999. There were reports at the time of Carrey's bizarre behavior on set, taking on the persona of Andy in nearly every aspect, never breaking character. But oddly enough, the talking never got above a whisper and eventually went away. Man on the Moon wouldn't become the blockbuster they had all hoped, especially when you take into account it's 82 million dollar pricetag, but Carrey would walk away with a Golden Globe award for best actor.

Documentary filmmaker Chris Smith (American Movie) sits down with Carrey for a deeply personal discussion about his time making Man on the Moon and Andy Kaufman. Smith has also been able to cull together backstage behind-the-scenes footage that Universal was not willing to release for the last 20 years for fear of it hurting the film's chances at the box office and awards season. You see, Jim Carrey's behavior was so obnoxious and so bizarre that they didn't want the public to think he was an asshole. He clearly was an asshole on set, but Carrey explains that it was because he was being Andy Kaufman every second of the day. Every single thing he did he would ask himself "how would Andy do it? Or how far would Andy go with this?". Could this behavior result in physical harm? You betcha. But that's what makes this so fascinating. The moment Carrey first stepped on set, he stopped being Jim Carrey and he was now Andy Kaufman, and anything that went along with that. Some of it annoying, some of it brave, some of it bizarre, but all of it is fascinating. 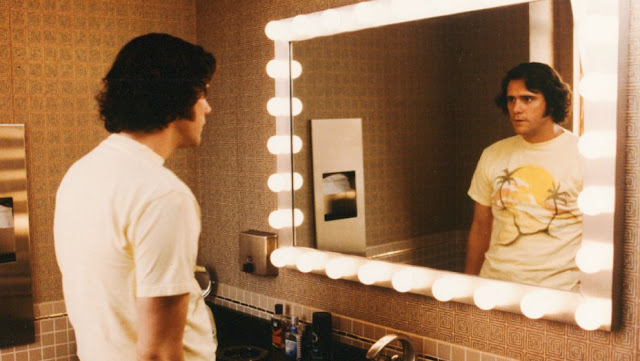 There's no doubt Jim Carrey is a comic genius. Here, maybe even for the first time, he discusses what drove him so passionately to pursue comedy in the first place, his epic turn to superstardom, the effect his father had on his life, and his identity crisis while playing Kaufman, all in a very zen-like demeanor that is unlike the Jim Carrey we've grown accustomed to. But that should be no surprise really. Carrey has largely remained out of the public eye for years, only appearing in minor roles or shorts, and devoting his life to his new passion...art. And much like he was as a comedian, he's also quite a brilliant artist. But he's also suffered personal tragedy, which isn't mentioned here, but if you're aware of it, gives you some better insight into who he's become lately. He doesn't headline films anymore, because he doesn't have to. He's content appearing in little projects (like his role as The Hermit in The Bad Batch), or as a detective in the Polish thriller True Crimes (1996). If he ever pops up in anything major these days, it's usually a big surprise. He's become a different person and listening to him discuss his life in a very calm tone, as if enlightened, is fascinating. His take on the whole experience of making that film and the impact it had on his life, his mental state and the Andy Kaufman legacy is brilliantly captured in this engrossing documentary. A. Must. See.