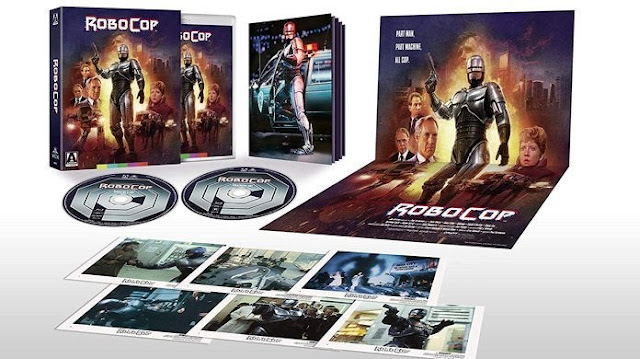 It's getting hard to count how many times Robocop has gotten an upgrade and physical media release, especially lately when it feels like it's happened about 2 or 3 times just in the past year alone. But collectors were really looking forward to this Arrow release, because let's face it, they've made a name for themselves in the Blu Ray market delivering some outstanding presentations of some of our favorite films. Would Robocop deliver their consistent quality? Let's find out.

The answer is a big YES. Like some of the previous releases, we get both the Theatrical Cut and the much more celebrated Directors Cut, offering a few more seconds of gratuitous violence. And believe me, those few seconds make a difference and leave an impact. And like those previous releases, these added few seconds are easy to spot because they appear a bit rougher and darker in quality, which is something I find surprising in that they still haven't found a way to integrate them into the rest of the film seamlessly. But it's not a big deal in the long run.

One of the biggest attractions to this new release is it's packaging, which is ripe with new goodies. Along with a nice looking "media box" to hold it all together, it comes with a book, a double-sided poster with the new artwork on one side, and the classic poster design on the other, 6 lobby cards and a nice dose of new Special Features. Oh, and of course it's been upgraded to 4K from the original camera negative by MGM and approved by director Paul Verhoeven.

Now, for some it's hard for people to get excited considering all the latest Robocop blu releases from various companies, but if you were going to double dip, or finally grab that Directors Cut, this is the release to get hands-down. It's just such gorgeous packaging all around, and combined with the plethora of extra content and goodies, not to mention how great this box looks on your shelf, it's a must buy. Oh, and you can't beat that price. Since it's initial pre-order release, it's gotten cheaper and cheaper to find, with Amazon even bringing the price down significantly at one time.


"My Personal History on Robocop" 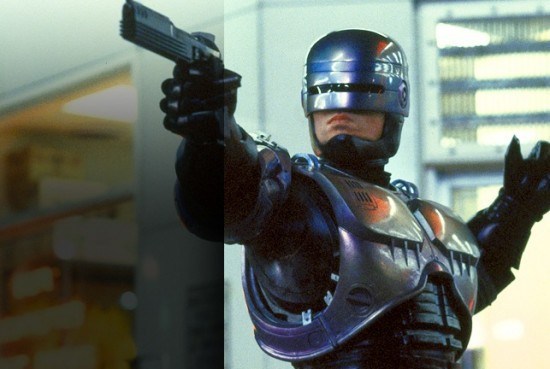 I was 11 years old when Robocop hit theaters in the summer of 1987. I remember going to the movies with my family to see Dragnet with Tom Hanks and Dan Aykroyd, and when the trailer for Robocop came up, I was in awe. This film was right up my alley. Since then I've been a Die Hard fan of it in almost every capacity; i.e. games, comics, cartoon, sequels, toys, etc. Yet, it never really dawns on me just how much I love it. I mean, I have a poster on my wall that's been proudly displayed for years. I have countless collectibles related to this film in my collection. I watch it at least once a year, and like this latest visit, I was just floored by how amazing it still is all these years later. If anything, Robocop may be one of the most accurate depictions of the future we've ever seen on film. I guess what I'm saying is, that I love it far more than I originally thought. I mean, I always knew I loved it, but I guess I never realized just how much until now.

When I threw this one recently to check out all that this new release had to offer, I was "still" giddy as a kid, being fully submerged in this world of satire, violence and an industrial future that isn't too far off from where we've become today. Even still, considering I've seen it hundreds of time in my day, I noticed new little things that I hadn't before and that is a test of a true masterpiece. No matter how many times you come back, it still hits you just as hard as the first time, while simultaneously giving you new things to notice.

Next up! Robocop 2 Collectors Edition Blu-Ray review coming soon...
Posted by robotGEEK at 1:42 PM No comments: 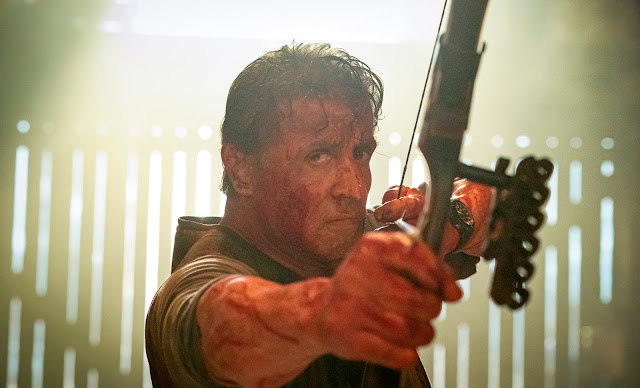 I just wanted to throw in a quick take on this one since it just hit DVD and Blu today, and this is the first chance I've gotten to see it so I'll just cut to the chase. I fucking loved it.

Here we have a much older Rambo, both in terms of his character, and the fact that it's been 10 years since the last entry. Usually when so much time has gone by, it rarely ever reaches the level of it's predecessor, but hot damn was this one just as good as 2008's Rambo. I will admit it's a very different Rambo film than we're used to. Gone is his trademark long hair and bandanna, replaced with shorter silver hair and generic clothing. But he's still a beast of a killing machine, and this time around, uses his skills to exact revenge on his home turf as opposed to the jungle or desert terrain that we've been accustomed to.

I feel that once you accept these changes (the standard Rambo look and location setting), you'll be rewarded to a brutal tale of revenge that delivers enough gore, blood and kills that reminded me why I enjoyed the last one so much. Now, it might not have as much action as you'd expect, instead delivering a slower paced film that builds up to a killer finale. But even so, at a brisk 89 minutes (unless you're watching the Extended Cut), time flies by so quick you'll be surprised when it's over so quickly.

When the action finally does come around, let me tell you, it's fucking brutal, gory and awesome. Basically they came up with an insane amount of over the top kills to try and match the last film to such a degree that when this part of the film does finally hit, you can easily forgive the lack of it up until this point. Because at the end of the day, Last Blood is really more of a drama/action/thriller rather than a straight-up action film like the previous 3 entries, but not as far into the thriller genre as the first one did.

As hesitant as I was going in, (the preview images of him wearing a cowboy hat and raincoat while riding a horse in the rain didn't help; yet those scenes aren't even in the final film) I was pleasantly surprised at how good this was, and to be honest, I quite enjoyed this older, but not any less violent take on the character. Here he continues to struggle with his past, but looks forward to doing nothing but keeping to himself and living on his ranch with his adopted family. He has no use for the outside world anymore, so has become sort of a loner. And when the only 2 people he cares about anymore are threatened, he goes full-on Rambo and it's glorious.

Still, as much as I enjoyed this, I feel the title of Last Blood was a mistake. Sly has already mentioned that he would love to revisit the character again, so that title feels premature. Instead I would have loved for this to be a sort of new trilogy of an older, wiser Rambo in his old years with a title more fitting like "Old Man Rambo, Rambo: The Later Years, Rambo: The War at Home, Rambo: An Old Mans Revenge", or something to that effect, to kickstart a whole new level of Rambo films that would be significantly different than the previous installments.

As a whole, Last Blood was awesome. It's slow buildup, hometown setting and emotional drama mark it as a very different Rambo film, while giving us some of the things that we've come to love about this series of films, and that's not such a bad thing.
Posted by robotGEEK at 2:17 PM No comments:

From writer John Fusco (Young Guns 1 & 2), and director Michael Apted (The World is Not Enough), comes this riveting thriller about a part Native American FBI agent (Val Kilmer), sent to a murder investigation on a Sioux reservation in what's meant to be an open and shut case. Partnered with veteran FBI agent Frank Coutelle (Sam Shepard), Ray Levoi (Kilmer) soon realizes that things just aren't adding up, and corruption may play a part.

I think I avoided this all these years because I assumed it was going to be a drama more than anything, but finally having seen it, I was pleasantly surprised to discover that it's in fact a sharp, taute and riveting thriller. It helps that the legendary Roger Deakins infuses the film with gorgeous cinematography, but there's so much more to offer here. For starters, John Fusco's script is excellent, giving enough time to deliver a real human connection, while simultaneously delivering the goods in the thriller department. British filmmaker Michael Apted takes great care in presenting the Native American angle with compassion, while also delivering a visually impressive aesthetic that 90's thrillers were so fond of. It's a shame most films aren't shot this way anymore, much less thrillers. It adds such a large touch of class to it all. Nowadays, shooting fast and loose seems to be the norm and it just takes so much away from the material. 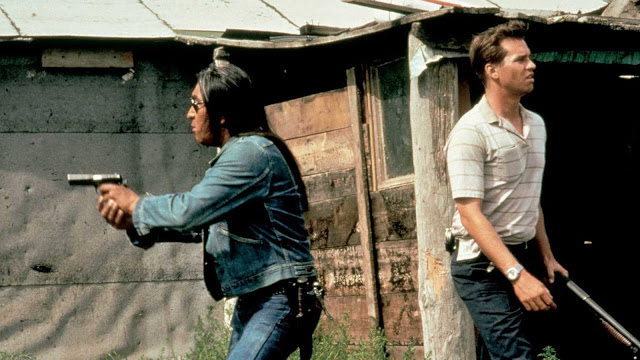 Kilmer, fresh off the heels of his portrayal of Jim Morrison in The Doors, does a fine job, as does the always reliable Sam Shepard and the painfully underused Fred Ward (Tremors, Remo Williams), but it's Graham Greene who steals the show here as Walter Crow Horse, a local police officer. While he had been working regularly since the late 70's, it wasn't until his breakout role in Dances With Wolves two years prior that Hollywood took notice, and here he delivers arguably the best performance, both of his career and in the film in general.

For a film I half-expected to use as a way of falling asleep (I have insomnia and sometimes watch slow films to fall asleep), I was thoroughly invested the entire time. Thunderheart packs a punch of thrills, emotions and intensity, and combined with it's gorgeous cinematography, strong performances and riveting storytelling, makes this an impressive and unforgettable film experience.

How to see it:
Currently available on every format other than Blu-Ray (yet), you can rent it to stream on Amazon for a few bucks, or watch it for free in HD on Crackle.com, as long as you're okay with commercial breaks. 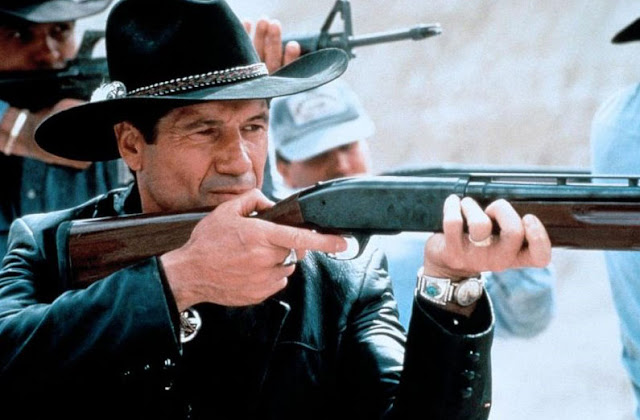 Posted by robotGEEK at 1:17 PM No comments: