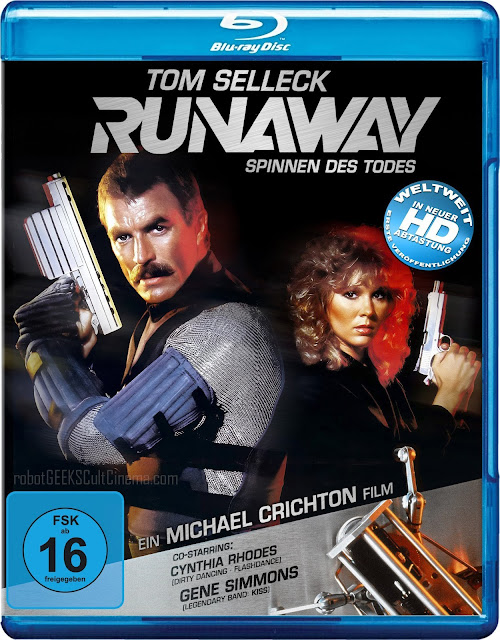 Ah yes. I know what you're thinking. Another Runaway post? Yes. But trust me, this one's special. Why? Because as of today, there still hasn't been a Blu-Ray release of this 80's Michael Crichton classic here in the United States. There have been plenty of releases on every other format (i.e. VHS, Laserdisc and DVD), but Blu-Ray isn't one of them.....yet. But fear not! There is good news. This German 2015 release is Region-Free and will play on your U.S. player. Hey, I have a Sony, which is notorious for not playing Region-Free releases, and it played it just fine, so if my fickle Sony Blu-Ray player can play a Region-Free disc, then you're in good hands. You'll be fine.

Released in October 2015 by Koch Media, this release is pretty standard and basic, but what you do get is a great picture quality in 1080p in an aspect ratio of  2.35:1. And let me tell you, as far as the picture quality goes, it's fantastic. While there is a very, very faint graininess found throughout the entire film, it's to be expected and doesn't take away from the film at all. In fact, it only adds a bit of vintage flavor to the scenes. It makes it look and feel like film more than it ever did before, only in a much sharper, cleaner way.

The aspect ratio is also great. Having only seen it in full frame personally, there were a lot of little things I hadn't noticed before because it was cropped out from either side. Seeing it now in widescreen I see Crichton's compositions so differently, and it looks so much better and more stylish. While I still don't like that most of the film was shot handheld, the scenes that he does take the time to set up look stunning in their execution. It's just a shame he didn't do that for the rest of the film.

Sadly, it's a pretty basic bare-bones release with zero extras other than the trailer. It would be great if the U.S. release, if it ever gets one, would have some kind of retrospective with Tom Sellick and Gene Simmons. I'd especially love to hear Simmons thoughts on this since it was his first big acting role outside of KISS, and his first in a string of memorable villain roles in the 80's.

Verdict: It's far better than any previous version released in terms of picture quality and sound. And really, it's the way to go if you really love this film as much as I do. There's just no question. And the price is really accommodating too. You can pick it up easily here in the states on eBay typically for around $20, but if you're patient, you can find it cheaper used.

Posted by robotGEEK at 9:03 AM