"They Live" Turns 29; A Look Back On John Carpenter's Cult Classic

"I have come here to chew bubblegum and kick ass....
and I'm all out of bubblegum" - Nada 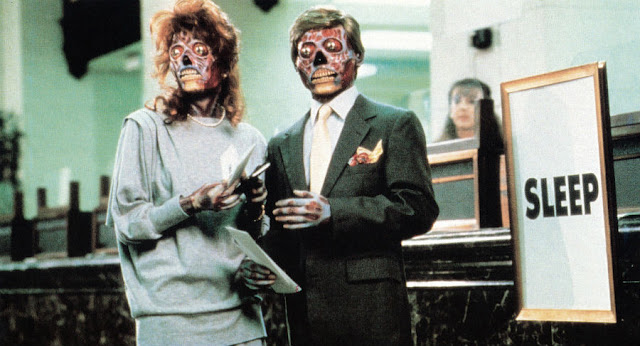 Can you believe it's been almost 30 years since this cult classic hit theaters? 29 to be exact. And while it didn't blow audiences away initially, it's only become more and more worshiped, beloved and appreciated in the decades that have followed. Even today, it strikes a familiar chord with people as it feels all too real in this world right now with it's messages of big brother, corporate capitalism and it's social commentary. It's a very special kind of film that, at the time, seemed so far out of left field that audiences didn't know what to make of it, let alone appreciate it's brilliance. Yet today, it's regarded as a masterpiece of cult cinema, and deservedly so.

I can't remember when exactly I first came upon this one, but I know it was years after it hit theaters. Somehow I saw it on home video and enjoyed it, but not enough to watch it frequently. Years later, older and wiser, I would revisit it (probably on DVD) and absolutely loved it. Since then it's been a film I've been obsessed with and constantly revisit on a regular basis. I'm so obsessed with it in fact that I want to get a They Live tattoo. Haven't done it yet, but it's always on the back of my mind. I have They Live art prints, posters, the score on vinyl and even the alien mask sitting on my shelf to further my visual obsession with this incredible film. I just love this movie so much; everything comes together flawlessly on a technical and emotional level. I probably hadn't seen it in about a year, so I threw it on last week out of sheer chance, not knowing the anniversary was coming up, and loved it just as much as that very first time I really learned to appreciate it all those years ago. It hasn't lost a beat, and hits all the right notes on a consistent level. It's one of those rare films that only gets better and better with age, and as mentioned earlier, seems to be more relevant than ever. 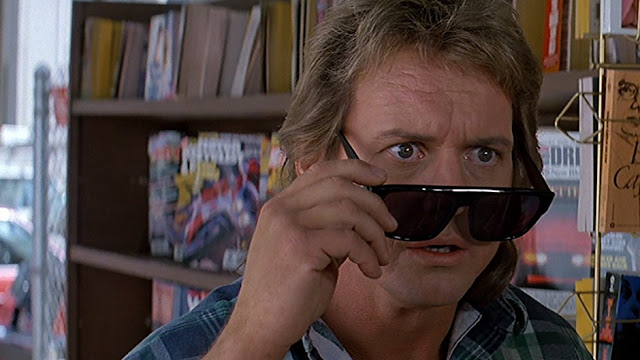 Revisiting it this last time though, I was struck by something really hard. And that is that Roddy Piper was just perfect in this. Sure there were better actors, but none could have matched what he had to offer. He transformed into Nada and nothing he could ever do after, or before (especially in the ring) could match what he did in this one single film in my opinion. His personal touches made this character so incredible. Sometimes he didn't have to say a word - his mannerisms spoke volumes. In fact, he barely utters a single word for the first 30 minutes. It's all in his body language and his facial expressions. For a guy who hadn't starred in a film before, let alone as the lead, he did an incredible job.

1988 was a special year for Piper. Not only did he continue to appear in WWF as a wrestler, he also had 2 minor roles in 2 direct-to-video flicks (Buy & Cell and Brutus the Beefcake Barber), but he also starred in They Live and the cult classic Hell Comes to Frogtown. While both films would continue to grow their cult status respectively throughout the following years, it's really They Live that would become Piper's most iconic role ever, resulting in merchandise, cosplay costumes and countless memes. He would continue to act regularly (quite frequently to be exact) in low-budget films; some memorable like Back in Action, Tough & Deadly and No Contest, but most of them forgettable. But even in his less memorable films, he was never lazy and gave his all. Which brings us to one of the highlights of They Live, the fistfight between Piper and Keith David; a sequence that would go on to legendary status and a fight that goes down on the record books as one of the longest fights in cinematic history. Below is a video where costar Keith David and producer Larry Franco discusses that sequence, working with Rowdy Roddy Piper, and how that film's appeal continues to grow. Enjoy!

On a side note. If you don't already own it, I strongly urge you to pick up Shout! Factory's DVD or Blu Ray release for the incredible commentary by Roddy Piper and John Carpenter. Seriously, Piper is a hoot to listen to and one helluva storyteller. Just listening to his thoughts and perspective on that landmark film is worth the price alone.

As originally published on Syfy Wire: