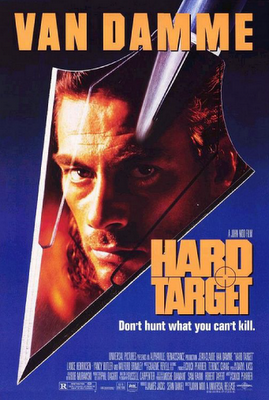 Hard Target is the quintessential Van Damme flick. If you ask most people what there favorite Van Damme flick is, they'll more than likely tell you it's either Hard Target or Kickboxer. For me, it's Hard Target. For this film, it seems like all of the things that make John Woo and Van Damme great come together perfectly for this film at just the right time in both of there career's. Woo was hungry to make a name for himself in the U.S. and filled this thing with so much over the top style and visual panache (often times unnecessarily) complete with all of his trademarks like his obsessive use of doves, long tracking shots, slow-motion and inventive crane work. There's even some classic Woo gunplay here with scenes looking like they came right outta The Killer and Hard Boiled, only usually Van Damme ends a two-handed shootout with a roundhouse kick. Awesome. Van Damme, knocking these big budget action flicks out one after the other while going head to head with Steven Seagal really shines here too. I  don't know if it's because he was young, on top of the Hollywood action A-List or Woo's direction, but here it's all in the delivery and it's refreshing. You see him in anything lately and the guy just looks tired, like he's going through the motions. I mean, even his facial expressions on most of his recent DVD covers. Look at his face and it's the same look.....tired.

Nat Binder (Yancey Butler) arrives in New Orleans during a police strike looking for her father who's gone missing. After running into a group of thugs, she's saved by Chance (Van Damme) who agrees to help her find her father and act as kind of a guide around New Orleans. They soon find out that her father was homeless and used as sort of a "human" target for an organization headed by Emil Fouchon (Lance Henrikesen) who pays homeless vets with no family $10,000 to be a target for wealthy clients looking for a thrill kill. If they make it to the designated destination alive, they keep the money. Unbeknownst to them the last target they hired indeed had a daughter who's come to town asking questions (exactly why they stress the "no family" clause) with a hired guide who knows a thing or two about survival, tracking, hunting and apparently martial arts who ends up being the last guy they want to fuck with.

Hard Target represents the perfect marriage of style, substance, action and good ol' fashioned stunt work. No CGI bullshit in here, just an insane amount of explosions, bullets and expertly choreographed action sequences. John Woo is in top form here, visually giving us a ballet of violence unlike anything we had seen up until that point. The big action sequence right in the middle of the film where it starts in the square with Chance doing that bit where he kicks the poor schmo off of the moving motorcycle and taking the bike out to the expressway where he's met by Foulchon's (Henrikesen) men in one unbelievably badass and awesomely long sequence is simply stunning. You think there's no way they can top that and in a creative sense, and they don't, but they do add an equally long and equally badass action sequence at the end with so much blood, bullets and mayhem that these two sequences alone are worth the price of admission. Luckily we're given a  pretty outstanding supporting cast along with Van Damme in top form (complete with insanely ridiculous mullet) including Henriksen as head bad guy, Arnold Vosloo as his right hand henchman, Yancy Butler (Witchblade) and even the great Wilford Brimley as Chance's uncle who sports a completely unconvincing (though funny) cajun accent. Henriksen "always" delivers the goods, no matter what he's in; the guy is just a badass. Vosloo does really well also as the South African henchman to Fouchon (Henriksen). He's not big or anything, he's actually kind of skinny underneath the many layers of clothes they have him in, but there's something in the eyes. He just creeps the hell out of you with those eyes. Brimley is a treat to watch, even if you don't buy the accent. Kind of a weird role for him to take, I mean in an action film. But then again, I never would have guessed he'd be in a horror film, and he nearly stole the show in John Carpenter's The Thing. Speaking of weird, I must also mention how strange I thought it was for Woo to make this film as his first foray into Hollywood filmmaking. An action film about a Canadian (?) in New Orleans taking on an assortment of villains on horseback and a motorcycle? Maybe it's just me, but I thought he would have gone for something more mainstream his first time out. Not to say that it doesn't work though, because it does, and awesomely!

If you want to nitpick the film apart, it's incredibly easy to do. I mean, the shit that happens here is just completely ridiculous, but as with most of these films, you have to just suspend all disbelief and enjoy the ride. Like, why the hell are they all wearing trench coats (Van Damme and Henriksen namely) when it's clearly like 120 degrees out there. I mean, everyone is sweating up a storm, but they're sporting thick black trench coats? And  I know there's a police strike supposedly happening, but being able to run around town in broad daylight shooting and killing people left and right through extensive set pieces is a little .......... out there. And that whole snake sequence is really silly, but funny too. There's a scene where Fouchon and company track down Chance's old war vet buddy to a crowded New Orleans street one night where all the bars are at. They shoot him to death in front of everybody and  get away with it? And I don't think the whole mullet thing is ever explained. I mean, "that" is a fuckin' mullet!

My good buddy Ingo over at Hellford 667 Movie Reviews recently hooked me up with the Workrpint Version of this awesome action classic and it was interesting, but didn't really offer anything to the story that was sorely missing. I like the cut that was released theatrically and feel it works just fine. You really couldn't ask for anything more in a 90's straight up action film. Maybe some nudity? But seriously, everything works. The cast, the action, the stunts, the camera work and most importantly Jean-Claude Van Damme kicking some serious ass and seriously rocking a southern mullet.
Posted by robotGEEK at 6:48 PM