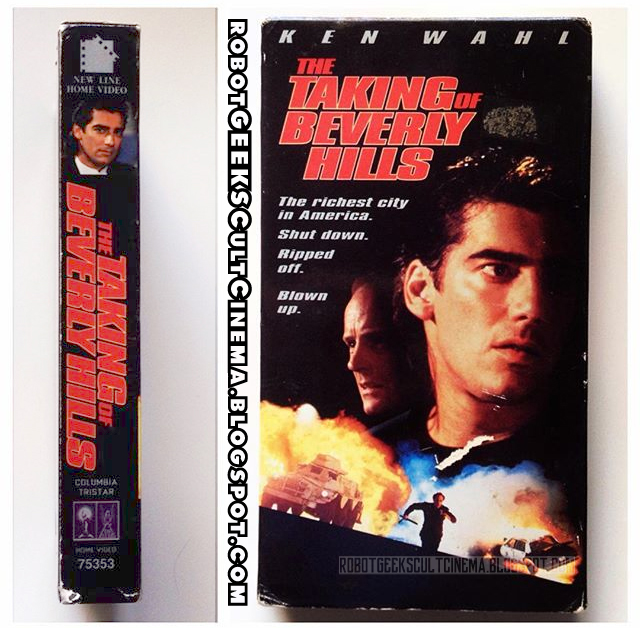 Here's a film that's really surprising to me for a number of reasons. The main reason being that nobody ever talks about it, which is such a crime, because the truth is TToBH is a hugely entertaining piece of Badass Cinema, and a much better film than you expect going in. Maybe not for all the right reasons, but it sure as hell falls under that category nonetheless.

When he's inadvertently stuck in the middle of crime disguised as a toxic spill, a football star (Ken Wuhl) partners with a cop with a heart (Matt Frewer) to stop a Beverly Hills heist worth billions.

I love it when I revisit a film that I haven't seen since I was a teenager and not having any real expectations going in, other than I hope it's good, to just be blown away by how awesome it is. That's exactly what happened with this one. First off, this film is pure nonsense and completely absurd. You really have to check your brain at the door, yet it's done with so much heart and quality that you can't help but love it. And I did. I loved the shit out of this one.

One of it's most charming and endearing aspects is that the film just looks fantastic aesthetically. I mean, this has all the trimmings of a big budget Hollywood studio film, the kind of action film that ruled the theaters back in the early 90's, and if it wasn't for some of it's absurdity, it could easily rival the best of the Die Hard ripoffs that were so prominent during this time. But it's the absurdity of it that makes it so great! This is Trash Cinema at it's finest, and if you're looking for a serious action film, look elsewhere, because while I'm sure it wasn't intentional, so much of this film is dumb, cheesy, and unintentionally hilarious, but in a really fun way that I mean.....how can you not love it?!

Let's start with the mullets. Were they still a thing back in '91? They must have been because they're pretty prominent in here and they're glorious. Then there's the complete lack of realism to almost "everything". For example, everything explodes for no reason. If a car is about to crash, it explodes for no reason at all while midair before it hits it's target. If a car jumps a curb, it explodes. Basically everything explodes, even the mansions of Beverly Hills. And quite easily I might add. In fact, if this movie is trying to tell us anything, it's that mansions in Beverly Hills are made of cheap plywood. Who would've thought?!

Some other magnificent highlights include Robert Davi playing a villain who delivers totally random and unnecessary exposition to help drive the film forward enough so that things happen, really bad one-liners, a villain (with a mullet!) who uses a tank, and a truck with a flamethrower, to chase our 2 hero's through the city when he could easily just shoot them, completely random music (most likely the radio hits of that year) that literally come out of nowhere that make no sense to the sequence and disappear as quickly as they show up, and...........well I don't want to give it all away. You just need to see it for yourself to really get it.

While I've never seen anything with Ken Wuhl other than his show Wiseguy, I have to admit that I'm surprised he never really made it in films. TToBH may not be high art, but it does display his ability to be charismatic, and physical in an action film. Robert Davi is on fire as always. This was when he was really hitting it big with films that I adore like Peacemaker, Maniac Cop 2 and Predator 2 just the year before. The guy's just great in anything he's in, even if he is just playing the same charater over and over again. Surprisingly though, he's not a cop in this one. So I guess that would be a change of pace.

To date (12/3/2016), this has only ever gotten released several times on VHS and once on Laserdisc. The VHS only comes in full frame, while the Laserdisc is surprisingly in widescreen (YES!), yet it's not cheap. Much like other films I love to death, this has never gotten a DVD or Blu Ray release here in the U.S., which just really surprises me. It's a great film that deserves a much larger audience, and with companies like Shout! and Scream Factory, Mill Creek Ent., and Umbrella Entertainment knocking out long lost cult classics left and right, I hope it's only a matter of time before one of them wises up and releases this in widescreen in an HD format.

Quite possibly one of the best times I've had watching an action film recently, this is the definition of Badass Cinema. Check it out!
Posted by robotGEEK at 1:41 PM