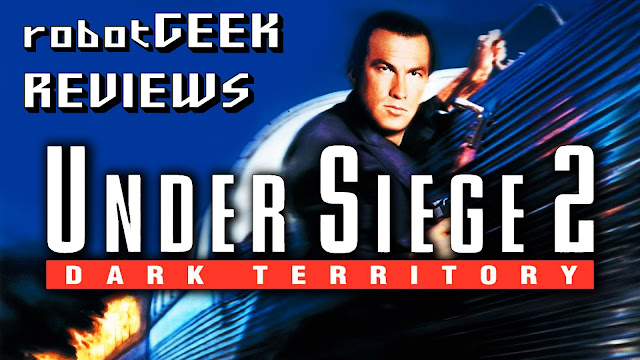 "Seagal's Last Hurrah; Steven Seagal returns as Casey Ryback in a sequel that's far better than it has any right being"

I've been on a bit of a Seagal kick/refresher course these past few months. Having dug into a few of his earlier hits like Out For Justice (which I loved) for example, I decided to keep it going with his Under Siege films, which I had as a 2-Pk DVD combo that you can easily pick up for super cheap. I recently covered the first Under Siege in my recent article "Die Hard on a..." Showdown: Under Siege VS Sudden Death, where I discuss what I liked about that first film and why it works so well. Being that it was Seagal's most successful, most polished and most loved film, a sequel was only natural. And why not? Seagal was still a big deal back then, and if any formula works, it's the "Die Hard on a..." style of film that is easily manufactured if done correctly. Perhaps if his films become less and less awesome, he could always fall back on his Under Siege franchise, the way Bruce Willis does with his Die Hard films? Let's dig in.

Having literally just finished revisiting the first Under Siege before heading into this one, I have to say that I found this sequel every bit as entertaining, if not slightly better. While this one doesn't have the luxury of a crazy Gary Busey or a villainous Tommy Lee Jones, it does hold it's own substantially well with it's colorful ensemble of bad guy's, led by the ultra-cool Everett McGill (Twin Peaks, The People Under The Stairs). But wait! There's also Peter Greene (Pulp Fiction), Jonathan Banks (Mike in Breaking Bad) and Patrick Kilpatrick (Class of 1999), among a host of other notable baddie's. For sheer amusement, there's also a very young Katherine Heigl, here playing the annoying teenage niece of Casey Ryback (Seagal), who she's stuck on a train with being held hostage by terrorists. Not the least bit surprising, the large cast of villains is a blast and one of it's stronger attributes. 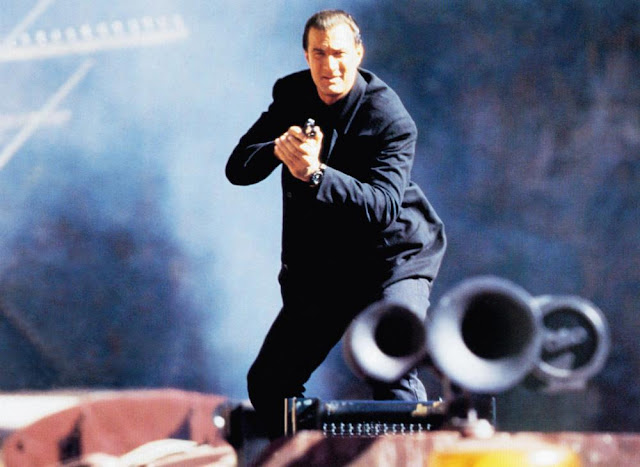 Really though, the main thing that got me excited to revisit this wasn't Seagal at all, but rather the fact that New Zealand director Geoff Murphy was directing this. Murphy is a director I've only now grown to fully appreciate after having revisited both Freejack (a film I never cared for before until now) and Young Guns II (one of the best westerns ever made). The early 90's were his creative peak, where he delivered some fantastic camera work reminiscent of both Peter Hyams and Roland Emmerich's at their very early best. So I was hoping that "quality" was still on full display going into this 1995 production, even though I was a bit let down with his HBO movie The Last Outlaw 2 years earlier. Still, I hoped a bigger budget and a lot of action would help bring him back to that slick 90's aesthetic I fell so in love with recently. Does his work in Under Siege 2 hold a candle to his earlier 90's films? Yes and no. Here he's playing it more freestyle than I'm used to from him, but considering how difficult it could be filming an entire movie on a train, I can forgive him for not taking the time to set up cool shots 100% of the time.

The action is great though, and that's really what matters. Seagal, looking thinner than he had in the first Under Siege 3 years earlier (surprisingly!), doesn't rely heavily on doubles yet, though you can still easily spot them. His inability to never be able to project any sort of range will never change, but at least we can still see him doing a lot of his own fighting here, which mostly consists of neck, back and nose breaking and not a whole lot of actual hand to hand combat. You see, he'll always be the better more experienced fighter in his films, so I can only assume the filmmakers find it silly to try and have anyone other than the main bad guy put up much of a challenge. And that's exactly what they do here, only this time his biggest competition is Everett McGill, who matches Seagal in size, but outdoes Seagal in cool. Man McGill is such a slick badass in this. It blows my mind he wasn't more of an action film villain after this. Of course Seagal still kicks his ass, but McGill's cocky demeanor as the ex-military for-hire henchman gives Casey Ryback a worthy opponent. 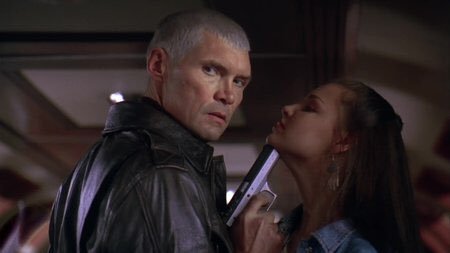 One of Dark Territory's more surprising elements is that it's a far better production than it has every right being. For example, the score by Basil Poledouris (Conan The Barbarian, Robocop) is large, loud and highly effective. The film also just looks and feels big - even though it takes place almost entirely on a moving train - thanks in no small part to Murphy's contribution behind the camera, and it's ridiculously high price tag. This sequel, shockingly, carried twice the budget of the first film (Under Siege: $35 million/Under Siege 2: $60 million), and only taking in half of that first films box office, which would result in a disappointment since it didn't even match it's own budget.

Steven Seagal's star power had already started to show it's first sign of losing steam by this point, despite having released only 6 films leading up to this sequel. Of course, we all know his first misfire would be his previous film, On Deadly Ground, also his only directing credit. It's safe to say he was never really able to recover since then. I'm pretty sure it's not just the films themselves being the only reason for this. Seagal had already garnered a reputation behind the scenes as cocky, controlling and difficult. I doubt producers and filmmakers were beating down his door to work on projects with him. Still, I quite enjoyed The Glimmer Man (1996) and Exit Wounds (2001), so he was still able to get a decent project here and there before settling into the DTV wasteland from the 2000's on. Which reminds me, I really need to finally check out Fire Down Below (1997).

Overall, Dark Territory delivers the goods in a big, loud, fun way. It's yet another excellent example of an efficient Die Hard-style action flick, made in the heyday of that specific genre. It stands out as one of Seagal's better films, and certainly his biggest. If I had any complaints, it would be the very lame tacked-on ending. The film climax's to a stunning and huge finale. I'm talking nutso huge. And despite the fact that your brain is telling you how ridiculous and absurd it is, it still looks fucking badass and you love it. And that should be it. Boom! Great ending. But no. Just when you think it's done and over with, there comes another sequence aboard a helicopter that adds nothing to the film and totally ruins whatever credit and momentum it had going for it. It's lame, tacky, and the effects work is terrible. Why??? Why ruin it with that?! The next time I watch it I'll have to remember to stop it once Ryback gets on the helicopter ladder, and you should too.
Posted by robotGEEK at 9:33 AM