"First time writer/director Douglas McKeown offers a classic creature feature that impresses on a technical level
....if nothing else." 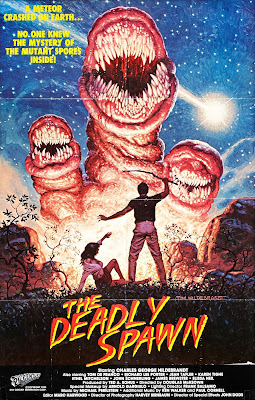 As big as this film is in the low-budget horror and bad movie night community, and as big a fan as I am of these films in general, it took me until now to finally see it. I'm not really sure why either. I guess I just didn't know enough about it in general or ever heard anyone actually say it was worth watching. I know the original VHS release goes for big money, making it one of the most sought-after tapes on the market, but even still, I've never actually heard anyone talk about the film itself. When I came across the 2004 Synapse Films release recently while browsing eBay I figured what better time than now? Especially for that price! Let's dig in.

When an alien creature and it's alien parasites crash land in a rural town, they take refuge in a house and devour each inhabitant one by one before they attempt to make their way towards the entire town and soon, the world. 4 teenagers and a kid are all that stands between the aliens and total world domination.

I think one of the biggest things that surprised me the most was how competent it is all around; from the direction, the acting, and most notably, the practical effects work. And really, it's in the effects work that makes this one worth watching. The monster effects are damn impressive, and when you consider the films minuscule budget, it's even more impressive. Throw in the fact that this is the only film on writer/director Douglas McKeown's resume, and I'm almost floored. What they're able to accomplish is really nothing short of astonishing, and I can understand why they would want to plaster the thing all over the marketing material.

With that being said, I wish I could say that I loved it, because I really wanted to. It has all the things that make for great Low-Budget Cheesy 80's Horror, but unfortunately it's saddled by too much talking and not enough actual alien carnage, which is really the reason why we all go into this or any film like this. I mean, the damn thing is plastered all over the marketing material instead of wanting to keep it a secret until the big reveal. Yet it only creeps and teases into scenes sporadically until the final act. But I will say that when it does show up, and even in it's brief moments early in the film, it's mightily impressive and a colossal achievement.


I think most people, because I certainly was, will be surprised by the fact that the acting across the board is pretty confident and strong. Especially the old women in the film, who end up doing things I couldn't believe I was seeing in a hilariously cheesy unintentionally funny and amusing way. And this may very well be part of what saves the film, because had the acting been terrible, and since there's so much dialogue compared to the alien monster action, this could have been a real chore to sit through.


Ultimately I enjoyed it, and I'm glad I finally got to see it, but it didn't blow me away. I was impressed and wowed sporadically with the effects work and Douglas McKeown's solid direction on a minimal budget, but the endless conversations that lead nowhere and tiresome dialogue constantly left me looking at the clock, which is never a good thing. 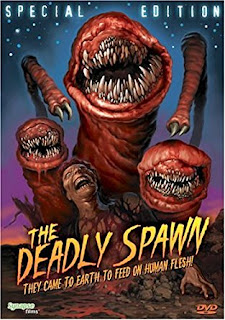 In 2004 Synapse Films released a Special Edition DVD and Blu Ray with a newly remastered transfer taken from the original 16mm camera negatives and a host of extra features. This is the version I saw, with the transfer, considering it was shot in an 1.33:1 aspect ratio on 16mm film, looking the best you're going to get. Meaning it's better than any of the previous VHS presentations. I wasn't expecting a miraculous digital transfer, because that's not the kind of film this is and it's not how it was made, but given the materials they had to work with, it's solid. You may have to crank up the sound significantly, which is what I had to do, to hear it very well as the audio isn't all that great, but in doing so you do get to enjoy the killer synth score courtesy of Paul Cornell, Michael Perilstein and Ken Walker. Which reminds me. I really need to track this soundtrack down.

SPECIAL FEATURES INCLUDE:
– New, Digitally Mastered Windowboxed Transfer in the Original Filmed Aspect Ratio of 1.33:1
– Two Audio Commentaries
– Extensive Still Galleries of Behind-the-Scenes Photos, Make-Up Effects, and the Premiere in New York City
– A Comic-Style Prequel with Its Own Musical Score
– Original Theatrical Trailer
– Alternate Opening Sequence with New Effects and Credits
– Animated Menus
– Outtake Reel
– Cast and Crew Biographies
REGION: 1
Running Time: 80 Minutes
NTSC – Full-Frame[1.33:1]
RATED R
1983
I have to tell you though. You really have to be a big fan of this film to enjoy the extras on this release. While I enjoy and admire special effects master Jon Dod's impressive work in this, as a person, the guy is annoying as hell when you see him in behind-the-scenes footage and interviews. But hey, that's just my opinion. The guy is clearly a talented beast, and that's really what we should be focused on. If you do enjoy the film, then this release is a definite buy.

Ultimately I think I was hoping for something along the lines of The Brain, an enjoyably bad cheesy low-budget horror film from the 80's that also boasts a large alien creature, just like this one.  But this ended up not being bad at all, or cheesy for that matter. It was actually quite a competent film overall, with great effects and better than expected acting. It was just too dull for it's own good, and didn't deliver enough of the alien action you expect going in. At least with The Brain, it was hilariously dated, cheesy, and unintentionally hilarious often enough to make it fun, especially with a group, which is what I was really hoping for with this one. In a completely weird way, this one fails because it's almost too well made, and not bad enough, if that makes any sense.
Posted by robotGEEK at 5:50 PM