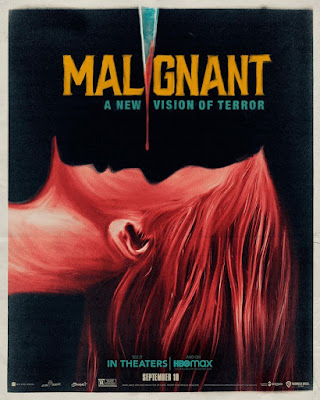 And I mean that in the best possible way. Going into Malignant, I was worried that it would ultimately be the same old thing we've seen countless times from James Wan (and that's not a dig), or rather, it looked like another Insidious movie to me simply based on it's trailer. Boy I could not have been more wrong, and I'm so fucking thankful for that.

Malignant is batshit insane. I mean that, and that's easily one of it's greatest strengths. Malignant is a hot mess, and legitimately one of the most unpredictable horror films I've ever seen. It constantly shifts tones so often that you simply cannot predict where it's heading at any given moment. While a lot of people love to claim they "figured out the big twist", regardless, I can guarantee you that they could not predict where this was heading from one scene to the next. Completely absurd, it will literally generate audible laughs and a whole lot of WTF comments throughout, yet that's what I found so much fun. It's not a "safe" horror film. It's as if James Wan decided "I've already gotten to the top, so where else can I go? Let me blow their minds and drive them wild". Kudos to you Mr. Wan. Thank you.

Let's not forget, James Wan has created 3 of the most successful modern horror franchises in history with Saw, The Conjuring and Insidious films. Not to mention directing one of the Fast and Furious films, along with DC's Aquaman. It was somewhat of a relief to see him go back to his horror roots, but not only go back to it, but go absolutely nuts with it, kind of in the same way Sam Raimi did with Drag Me to Hell (2009) after directing everything from superhero films to dramas and thrillers.

With that being said, people are either going to love it or hate it. It's split so far down the middle it's been a blast hearing everyone's reaction to it. And whether you love or hate it, whatever he did is working because we can't stop talking about it. My only regret is that I didn't go to the theater to see it. And that wasn't by choice. I just couldn't get to it, so I watched it on HBO at home. But it's a gorgeous looking film and with so much homage to Argento going on, I really wish I had seen it on the big screen. Personally I fucking loved the shit out of it and had such a blast with it. I honestly can't remember the last time I was this surprised and downright dumbstruck by what I was watching. Trust me, you'll have a very clear idea of what you're getting into in the very first 10 minutes of the movie. And I have no doubt that every creative decision in here was intentional. So if you laugh, it's because he wants you to laugh at the absurdity of it all. If you scream "What the fuck?!", it's because he wants you to.

I think I'll just leave it at that for now. Saying anything else about the film could potentially spoil it for someone. Curious to hear your thoughts on it though. Please consider leaving a comment and lets discuss. Or comment on my Instagram post. 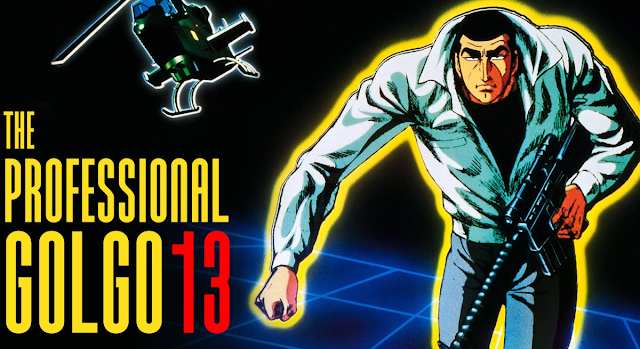 First off, I'll admit I'm not the biggest anime fan. I would say I'm a casual anime fan, but even then, I'm so far out of the loop when it comes to titles and franchises that I usually don't bother with them unless one is highly recommended to me. And that's exactly what happened here. Someone had posted about this on Instagram, so I took the advice and added it to my watchlist. It took me a few weeks to finally get around to it, but holy fuck I'm so glad I finally did.

Golgo 13: The Professional is an absolute kickass and killer film, animated or not. It's as if John Woo (The Killer) and Luc Besson, (The Professional), in the height of their career's, collaborated on a film about a hitman and cast Ken Takakura (Black Rain, The Yakuza) or Sonny Chiba (The Street Fighter). It's hyper-violent, hip, slick, sexy and cool as all hell. Though released in 1983, it oozes late 70's aesthetics out of every pore; from the score, costume and art design, sound design and tone. So imagine my surprise to discover that both Takakura and Chiba both starred in live action adaptations in the 70's prior to this animated film's release. I had no idea, but holy shit it makes sense. Now to track those suckers down.

As a film, it's just so fucking cool. The cinematography alone is damn impressive. Each single frame is a work of art, and it blows my mind how it was basically shot and structured like a live action film and not an anime, where they could just go nuts with everything. And I think that's what I love most about it, which is why I kept thinking this could easily be a film by Woo or Besson starring Chiba or Takakura. It's essentially like watching a film with all that talent combined and it's blissfully insane.

You don't have to be a fan of anime, or even have to know anything about this franchise going in. It's an incredible standalone feature that blows nearly every other anime or animated film out of the water, both current and classic. This, without a doubt, is going into my Top 5 Animated Films of All Time list.

My research afterwards provided a lot of insight. First, it's considered one of the longest running manga's ever since it's initial launch in 1968, and still running today. 2 live action films were made in the 70's, each starring Chiba and Takakura in the lead respectively, and produced an animated series (50 episodes) in 2008, along with another animated film in 1998 titled Queen Bee. Oh, and I hear it was a badass NES game as well here in the states. Definitely going to look for that soon for my collection.

How To Watch It:

Physical Media: It has gotten a Blu-Ray release via Discotek Media, which you can pick up for generally around $30 on the seconhand market, and the old DVD for under $20, but I can't find any information that says if the DVD is in widescreen or not. You can find the full frame VHS for fairly cheap these days too. You can also find its incredibly funky score on vinyl for a pretty penny.

Transformers: The Movie Screens This Sunday in Theaters via Fathom Events

That's right! As part of it's 35th Anniversary, Fathom Events will be screening this legendary, and quite possibly one of the greatest animated films of all time, this coming Sunday, September 26th, and Tuesday, September 28th. 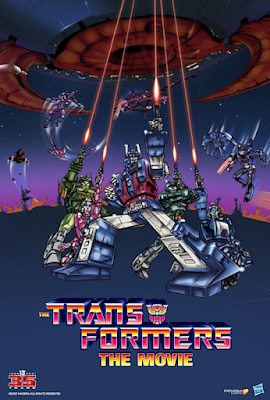 In celebration of the 35th anniversary of its release, the world-renowned 1986 animated feature film THE TRANSFORMERS: THE MOVIE returns to U.S. movie theaters for two days only, for an experience that's beyond good, beyond evil, and beyond your wildest imagination! In addition to the feature, audiences of this special event will be treated to brand-new exclusive content.

While a box office bomb upon it's initial release, this landmark film has become a certified cult classic in every sense of the meaning, and has gained such a huge following that you seriously do not want to miss the chance to see this on the big screen. For me personally, it's my favorite animated film of all time and this will be my first time ever getting to see it in theaters as I never got the chance as a 10 year old back in 1986. So you can bet your ass I'll be there as a 45 years old this coming Sunday.

You can purchase your tickets via Fathom Events website HERE.

While we're on the subject, be sure to check Toy Galaxy's excellent new video on YouTube titled Hasbro's Hubris: The Story of the Failed the Transformers: The Movie (1986) where they go deep into it's initial inception, release, backlash, negative reception and finally into it's much celebrated cult status.

Stumbled upon this excellent rare vintage ad promoting the Uncut U.S. premiere of Dolph Lundgren's The Punisher at an L.A. Comic Book & Science Fiction Convention back in 1990 via my buddy's Facebook page The Punisher 1989: The Untold Story of a Cult Classic. This ad scan comes courtesy of Greg Beville. 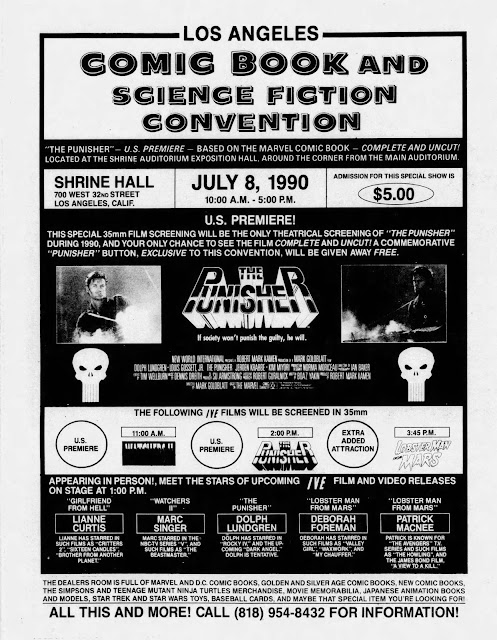 According to Jeremie Damoiseau, author of the excellent French book Punisher: The Secret History (currently being translated to English for a U.S. release), the screening did not go as planned. Here are some details from Damoiseau himself:

"The screening did not go as planned since the print for WATCHERS II never arrived... Therefore it was LOBSTER MAN FROM MARS first, then HOWLING V and finally THE PUNISHER!
Although announced as a tentative guest, Lundgren did not attend, but director Mark Goldblatt was there and waved to the audience after the film got a standing ovation."

There you go. I thought it was some fascinating history regarding the release of one of my absolute favorite films ever. I wonder if those in attendance ever got those exclusive Punisher button's after all?

Posted by robotGEEK at 1:04 PM No comments: