Child's Play Turns 29 This Month; A Look Back On The Original Classic 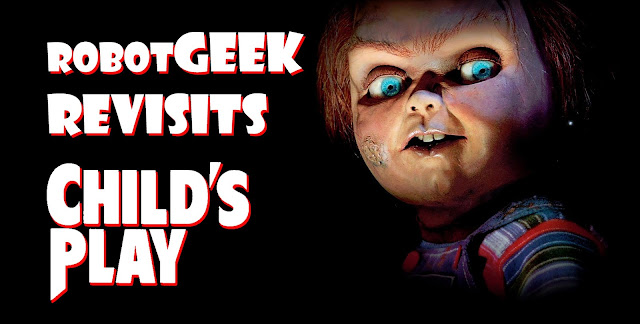 When I watched the newly released Cult of Chucky recently on Netflix, I hate to admit that I wasn't all that into it. But to be honest, I've lost interest in the Chucky franchise many years ago. In fact, I've never even seen Seed of Chucky, considered by most to be the series lowest point. My interest in the franchise is sporadic at best. I only really like a few of them, and have no desire to ever revisit most. But when Chucky creator and screenwriter Don Mancini decided to go back to basics after the lousy reception of Seed of Chucky, and offer a stripped down approach to the material with Curse of Chucky, it was enough to get me to check it out, and I have to admit, I enjoyed it. While it was nowhere near as great as the original, it was a step in the right direction. The positive reaction to that one meant Mancini would continue down this path for the followup, Cult of Chucky. The reception for Cult was decisively mixed, but for me personally, I wasn't that big a fan. I can appreciate what he was doing, taking the franchise in yet another direction, but I was mostly bored throughout the process. The reality is that you really have to be a die-hard fan to appreciate these films in the first place. Going in as just a casual observer, without any of the history, will leave you lost. But it was that experience that reminded me that it's been forever since I had seen the one that started it all. As luck would have it, my good buddy was kind enough to give me the Blu Ray as a gift. So let's dig in.

Though never really that big of a Child's Play fan to begin with (not enough to actually own any of them), I was struck by just how great this first film really is. Despite the years that have passed (29 to be exact, and released this very month), Child's Play still packs a punch of entertainment. Surprisingly, it still works as an effective horror/thriller without the cheesy legacy that would soon follow with the many sequels. And while the script (credited to 3 different writers) is strong, it's really Tom Holland's (Fright Night) solid direction that brings this film to life and gives it so much of it's gritty aesthetic. And that's what Child's Play is; a dark, gritty atmospheric horror/thriller that does one helluva job in delivering the goods in both visuals, suspense, scares and entertainment - something none of the films since have been able to match. Don't get me wrong, a few of them are pretty good. Last I remembered, Bride of Chucky was pretty fun, gory and super slick thanks to Ronny Yu's impressive direction. But none of the sequels (6 in total) could deliver or match what made the first one so special. And it's really hard to explain too. What is it that works so well that the other couldn't capture? Honestly, it's 2 things for me; Tom Holland's solid direction and it's cast, led by the ever-reliable Chris Sarandon. Of course Brad Dourif is just excellent, and next to Don Mancini writing every single film, has been the only one to be involved in every single Chucky film, and even Andy, played by Alex Vincent, is adorable. But Sarandon is the standout for sure, here as a detective who just doesn't believe Andy, or his mother's story about the doll coming to life and killing people, until he finally see's it for himself. 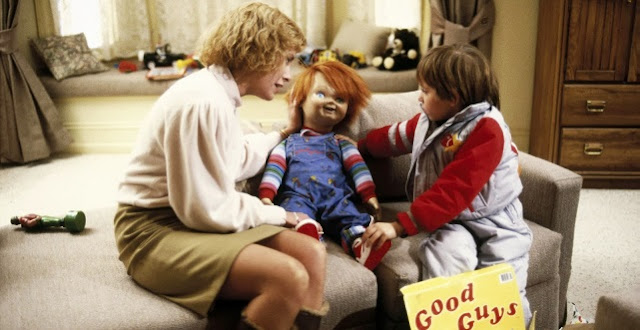 Going back to Tom Holland, I had always thought that this was another franchise he created, like with Fright Night. It was only a few years ago that I discovered that it was actually Don Mancini's baby from the beginning. Still, Holland would eventually contribute to the script (he did start off as a writer, having written Psycho II and Cloak & Dagger ) as well and it's his impressive technical skills behind the camera that sell it. I love the look of this film; cold, dark, gloomy and gritty, yet filmed with an expert touch. The visuals are a knockout and are yet another great example of Holland's tremendous skills behind the camera. Revisit the original Fright Night to refresh your memory, or better yet, give the Whoopi Goldberg film Fatal Beauty (which he directed between Fright Night and Child's Play) a watch and proceed to have your mind blown. That film, despite it's attempt at marketing it as a comedy, is really a tight, violent, gritty action/thriller made all the more stronger by Holland's solid direction. In short, Child's Play is as successful as it is largely because of Tom Holland's contribution.

Part of what makes this one work so well is that for a large chunk in the first half, you don't actually see Chucky do anything, leaving it a mystery while your imagination begins playing out. That's one of this film's biggest strengths. Of course, when he finally does make his presence known, it continues to hold your attention because it's fascinating how they did it without the work of CGI. And to tell you the truth, watching it again recently, I still don't know how they pulled off some of those shots. They're incredible, fascinating and surprisingly effective. But without Dourif's brilliant voice work, it wouldn't have turned out nearly as successful. As great as this whole setup and payoff is, it almost didn't happen that way. Originally Mancini wanted to keep the fact that the Chucky doll was actually possessed a secret until the very end, making the audience wonder if it was all Andy's imagination. Furthermore, the concept of this film changed radically over time before it was eventually filmed, as it was originally intended to be a satire on the toy industry, then a psychological thriller with one idea toying with the fact that it wasn't a possessed doll at all, but rather an extension of Andy's rage. Another idea thrown around in the beginning was having Charles Lee Ray actually be Andy's real father. Fascinating. 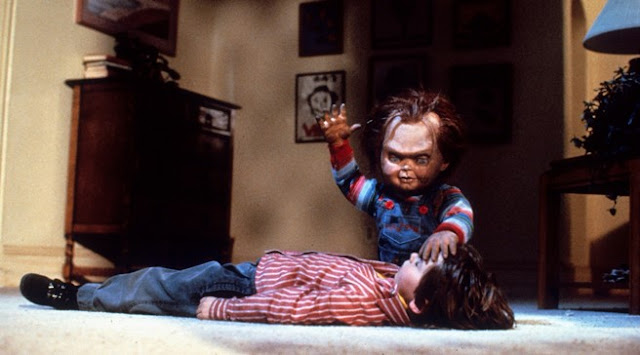 Despite the fact that the franchise has spawned a total of 7 films to date, it's been a bumpy ride to say the least, all starting with the first film's release. Parents protested the originals premiere, most famously at the entrance of MGM, saying that the film would entice children to commit acts of violence, which director Tom Holland vehemently denied by saying a movie would never do that; the person has to be unbalanced to begin with to be influenced by a film. Ultimately MGM disowned the first film because of the controversy and subject matter, selling the rights to Universal, who would eventually release the sequels.

And then there's the screenplay drama. Though the final version contains a good 50% of Mancini's bones of the original script, Holland and John Lafia would also contribute to the script and secure a co-writing credit. In reality, there was a fourth contributor, Howard Franklin (Someone to Watch Over Me), who went uncredited. According to reports, the fight over screenwriting credit got so bad that creator Don Mancini and co-writer John Lafia (Child's Play 2) were barred from the set. But really, this is Mancini's baby through and through, yet Holland's signature is also all over this thing, making for a much stronger film all around. It may also be why none of the sequels could match the quality of this one, because despite whatever friction there may have been behind-the-scenes, the combo of Don Mancini and Tom Holland resulted in a sure-fire hit. It may not have ended up being the film Mancini envisioned years earlier in his head 100%, but it's a damn good film and the best in the series regardless. Don Mancini would continue as the solo screenwriter of all the Chucky sequels that followed, and would step into the directors chair for the last 3 installments; Seed of Chucky, Curse of Chucky and Cult of Chucky.

After nearly 30 years and 6 sequels, this is still the best looking film of the franchise. You'd think it would feel the most dated, since it's the oldest of the bunch, but it's quite the opposite. Yes there are elements that do make it very much an 80's movie (which adds to it's charm), like for example, Andy's terribly decorated apartment, and the rad Good Guys cereal, pajamas and TV show; but never in an obnoxious way. Overall it almost looks timeless, like it could easily fall into any decade.

Dust off your old VHS or DVD, or grab one of the many Blu-Ray releases out there and enjoy this little-appreciated and often dismissed classic and give it a watch. It's far better than you remember it being.
Posted by robotGEEK at 1:16 PM