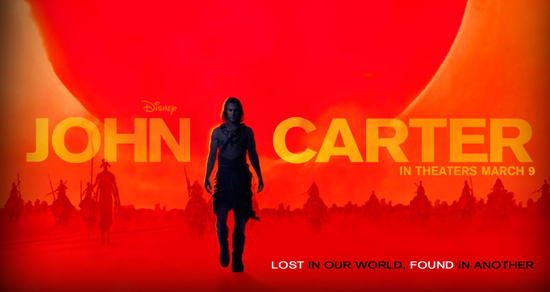 These days, when films end up costing somewhere around $250 million dollars to make, it's hard for them to live up to expectations. More so with a property that not everybody is familiar with, such being the case with John Carter. Based on a series of books by Tarzan author Edgar Rice Burroughs, this film had been in development hell for years, literally going all the way back to the 30's, and going through a varied roster of directors such as Kerry Conran (Sky Captain and the World of Tomorrow), Robert Rodriguez (Machete), John McTiernan (Die Hard, Predator) and even Jon Favreau (Iron Man). But for one reason or another was never able to get off the ground until Pixar wiz kid Andrew Stanton (Wall-E, Finding Nemo) came on board for his first live action directorial effort. The name even went through many changes as it was originally titled "A Princess of Mars", of which the story is based. Then it was changed to John Carter of Mars (a MUCH cooler sounding name) before it was just called John Carter. So how does John Carter end up being a century to the year after it was originally published?

John Carter was fucking amazing! Now keep in mind, I did have some issues with a few things, namely the lame title, the "what were they thinking?" opening and some dull moments here and there, but for the most part, when it's all over and the end credits roll up, John Carter ends up being an awesome piece of action-sci-fi-fantasy at an insanely epic scale that keeps you solidly entertained from beginning to end with some of the most amazing effects to be put to film to date. Add to that a frenetic pace with only a few slow moments sporadically thrown in and it's a great way to spend 2 hours and 12 minutes of your life.

I really don't know who's responsible for the hack job done to the title because John Carter sounds mediocre as hell. I mean, it sounds like it could either be some football biography flick or some weepy romantic drama. John Carter of Mars was perfect, especially considering there intention is to make a whole slew of these films if this first one is successful enough. Throw the word Mars into the mix and it's instantly awesome. But just John Carter? Especially since the majority of the average movie-goer has no idea this is based on a wildly successful series of science fiction/fantasy books written in the early 1900's? Bad move. And that opening sequence just felt all wrong, completely taking you out of the story and instead of working out the story-line to reach that point, kind of blindsides you with this oddly out of place sequence that makes you think the studio didn't think you'd be smart enough to figure it out later in the film. Like, "Boom! Here's some information you NEED to know before we even get into the story that way you know what kind of film you're getting into right off the bat!".

It's hard to really go into any detail as far as the story goes, because I went in knowing very little (only knowing it was from a series of vintage science fiction stories by Edgar Rice Burroughs and was originally titled "Princess of Mars", of which this first story was based) and was rewarded handsomely with a sweeping epic tale spanning 2 planets and endless characters, species and a wildly imaginative story-line. So I will try to be as fragile as possible giving only important information in regards to the story. But be forewarned.


Possible Spoilers Ahead. John Carter is a Civil War soldier who's done his duty and just wants to be left alone. When the war tries to re-enlist him, he fights them off any chance he gets until one day he's cornered and miraculously transported to Mars. There, much stronger and able to leap huge bounds because of the effects of gravity, he's caught up in a thousand year old war between feuding tribes, a princess in desperate need of a savior and an evil warlord with the power to destroy the planet in the palm of his hand. With his unique power and abilities, John Carter becomes a reluctant hero with only one thing on his mind........to get back home.


I also feel the marketing for this film is way off. I don't know where to pinpoint it exactly, but it just feels so uninspired. The trailers do not do the film justice and I remember first seeing the teasers and not being impressed at all. Even the theatrical trailers were just alright. But now that it's out, I've seen some much more impressive TV spots capitalizing on a lot of the films strengths and actually make me want to go see it again. I also think they could have done a much better job with the poster art. Remember that first teaser poster of a closeup of his face with the initials J.C.? What the fuck is that?! That's the best you can do to get the average movie-going public excited about a film and possible franchise they know nothing about? I think when it's all over and it's come and gone the big wigs will see what a huge opportunity they let slip through there fingers because they hired the wrong people to market this thing.

In terms of sheer science fiction/fantasy spectacle, this probably won't wow you like Avatar did, but I wouldn't be surprised if it didn't come pretty damn close if you can look past the lame title and marketing of the film. It's much better than the trailers lead you to believe and with the guy behind Wall-E and Finding Nemo at the helm, it's pure genuine science fiction entertainment at it's finest.
Posted by robotGEEK at 8:36 PM