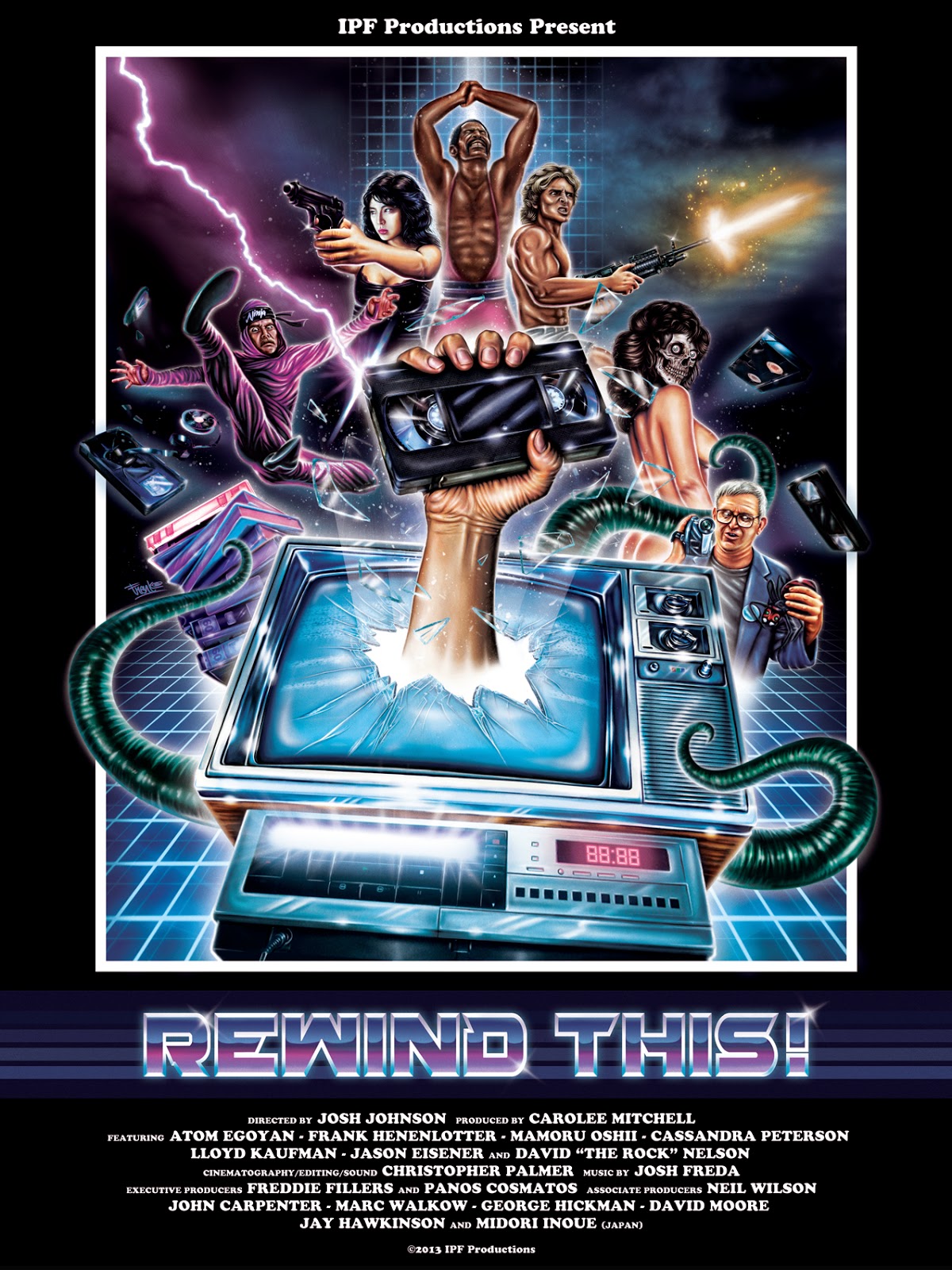 As an avid VHS enthusiast/collector myself having gotten back into the game a few years ago, this, along with Adjust Your Tracking, have been 2 documentaries that I've been dying to see because they both deal with the recent VHS boom. I have yet to get a hold of Adjust Your Tracking, but happened on this on streaming on Hulu Plus.

I have to admit, this one did not have a great start. In fact, the first 5 minutes were so dull that before the opening credits started to roll, I actually started to wonder what I got myself into, or if I'd even be able to continue on. Basically it's a guy scouring a local flea market for some VHS tapes as he's talking to the camera about what he looks for and what he ends up finding almost every time. You kind of hope that this tedious and uninspired segment leads to him finding that rare "find" out in the wild. But that is not to be. Instead what this guy is doing is giving you an idea of how boring and uneventful VHS hunting can be because for every Deadly Prey or Black Devil Doll From Hell you "might" stumble upon at a garage sale, flea market or swap meet, you will always come across about a thousand Titanic or Jerry Maguire's.

Thankfully, and rather impressively after a killer opening credits sequence, Rewind This! changes course 180 degrees and what we are treated to is 94 minutes of VHS love. Full of insightful information regarding the VHS boom of the 80's, even going into the machines that played them and their role in the VHS vs. Betamax war and even giving us the complete history of how home video even came to be and where it started, Rewind This! is a filmgeek's dream. Rarely does a documentary ever turn out this good, but this one does in spades. Oh, and what documentary about the home video revolution would be complete without delving into the start of the porn industry and their role in the format? Oh yea, they go there too.

As engrossing and entertaining as the entire thing is, there are a few notable standout interviews; chief among them, Frank Henenlotter (Brain Damage, Frankenhooker, Basket Case) and another guy named David Nelson, who calls himself The Rock and apparently has no idea of how to make a film, yet has miraculously made hundreds of them by splicing together scenes he films randomly until they make sense. And he sells them door to door. Henenlotter, on the other hand, seems like a really fun guy who just doesn't give a shit about what anybody thinks, but this guy The Rock seriously needs to consider doing motivational speaking because he was just great at it during this one moment when he's basically screaming at you to follow your dreams and not listen to what anyone else has to say about it. You want to do it? Then go out and fuckin' do it and stop crying about it!

Rewind This! has everything a video nerd and filmgeek could want. Remarkably engrossing from start to finish it will surely make you want to dig through your old box of VHS tapes you have stored away in the attic to see if you have any lost gems hidden in there. Director Josh Johnson has crafted a loving homage and nostalgic trip down memory lane for those of us old enough to have been alive and collecting during the height of it's success. Rewind This! acts as a quirky time capsule to a different time, and it's surprising and quickly expanding resurgence.
Posted by robotGEEK at 7:08 AM 2 comments: 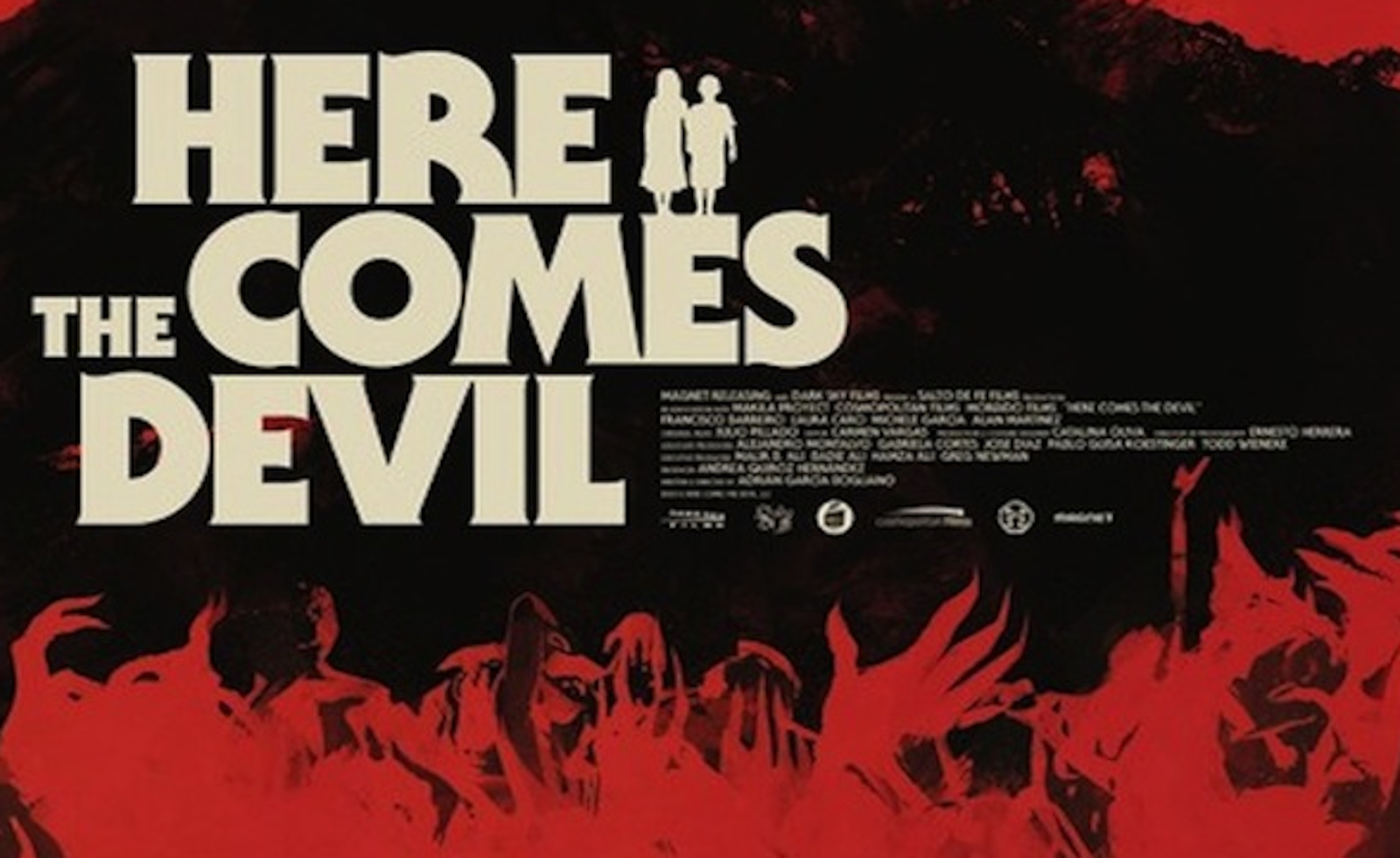 A few months ago I had heard about this film hitting the festival circuits. When the trailer finally hit, it literally gave me chills of excitement. It felt like an old school style horror film. A homage, if you will, to films like Rosemary's Baby, The Omen and The Changeling. Boy, that trailer got me really excited. Then literally just a few weeks after seeing this amazing trailer I came across a film on Netflix called Cold Sweat. It sounded intriguing, so we threw it on and boom! Directed by Adrian Garcia Bogliano, the same writer/director of Here Comes the Devil. Now I enjoyed Cold Sweat immensely, so my excitement over HCtD only intensified and when I realized it was available to rent just the other day, I jumped at the chance for some old school creepy horror.

Overall, I'd have to say that HCtD didn't fulfill my expectations as much as I'd hoped. At times it felt like a completely missed opportunity, and at others it felt semi-amateurish. Bogliano has a distinct way of directing, and while it worked well for Cold Sweat, it didn't seem to for HCtD. But the shocking thing is that if you've seen the trailer, it promises a distinct style and narrative based on the visual elements alone, yet ultimately does not deliver. While he does try, he can't seem to help but revert to his often playful kinetic camerawork, which is a shame really. HCtD had so much potential, yet fails to deliver on several levels.

The thing is that this could have been a creepy as hell and deeply unsettling film, yet only seems to slightly scratch the surface on that concept. If you've seen the trailer, you know the story. Two kids go playing around on a mountain, go over the hill and disappear, only to reemerge later and acting strangly. Oh man, there are so many things you can do with that concept alone and hell, the damn title pretty much fills everything else in. But as much as I hate to say it, HCtD doesn't always deliver the goods. There's a lot to like about it if you give it a chance; some really inspired sequences and a cool "WTF?!" revenge moment, but there's also a lot of things that just don't work and some ideas that drag out way too long and take you out of the experience. I think one of it's biggest weaknesses is that it runs along at a snails pace. While that's nothing new for a film like this, there are times where it's just too much, especially when writer/director Adrian Garcia Bogliano spends a little too much time trying to establish the strained relationship between the mother and father of the now creepy-ass kids. But then something unsettling and disturbing happens and you remember, again, that you are in fact watching something pretty cool.

As things progress, it takes a number of predictable turns, but most of all takes more unpredictable ones. Annoyingly though, with some of these creep-out rad scenes that are thrown in randomly from to time, a good chunk of them are never explained so you don't really understand what they mean or what significance they have in relation to the creepy kids. Are they doing these things? Or are they just a pawn? It can get a little frustrating from time to time not knowing, but the constant sense of overall dread hovering over everything in this film kind of helps you forget, because it's rare that a film like this ever comes around so for the most part, you can forgive it's flaws. I'm sure it sounds like I'm bitching about the whole thing but in all honesty, I really enjoyed it. It just feels like it could have been better or that they didn't fully realize it's potential, and as an avid filmgeek, you obviously start thinking of all the ways it should have gone but didn't. Regardless of my personal feelings about it's shortcomings, Adrian Garcia Bogliano's HCtD is still a knockout of a haunting creepy-kids thriller.

Posted by robotGEEK at 2:05 PM No comments: 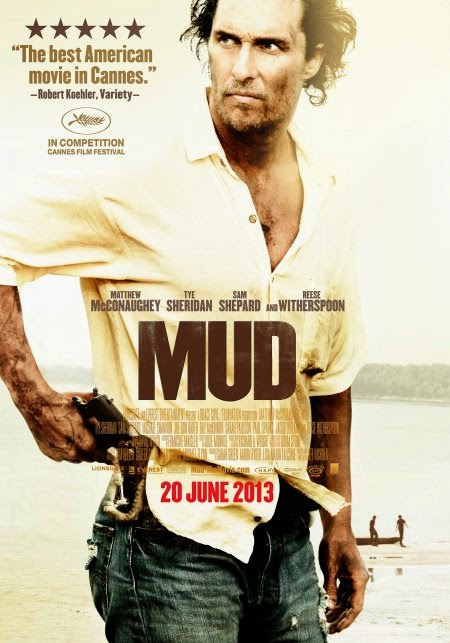 I caught this last night and wanted to wait a bit before I threw some comments down on this one. So here are some quick thoughts now that I've had time to process it in no intelligent order and quite random.

I didn't know what to expect from this since all I kept hearing was how incredible this film was, and not really anything about what it was about. But it surely did not disappoint. Again, McConaughey knocks this one out of the park and the guy just can't be stopped. He's on a bigger career high than he was when he began his career. Since 2011, he has been killing it!

At it's heart, Mud (named after McConaughey's character) is a drama with some slight elements of suspense. But it's the way writer/director Jeff Nichols puts it all together and structures it that while technically a drama, it's thoroughly engrossing from start to finish with Nichols even playing with the thriller genre a bit in here. Every performance is top notch in this, but it's 14 year old Tye Sheridan who steals the show. This kid is good. I look forward to seeing him in the Nicolas Cage drama "Joe" that I keep hearing will knock our socks off.

And last but not least, Jeff Nichols lush visual eye candy is something to be admired. Rarely does a filmmaker, let alone one who's only had 2 other films under his belt, take the time to give each and every single frame such loving attention to old fashioned filmmaking, yet Nichols takes immense control over every single frame of film that even though it's rural Arkansas, he makes it look stunningly gorgeous.

Currently streaming on Netflix.
Posted by robotGEEK at 11:22 AM No comments: