Class of 1999 Coming To Blu-Ray From Vestron Video! 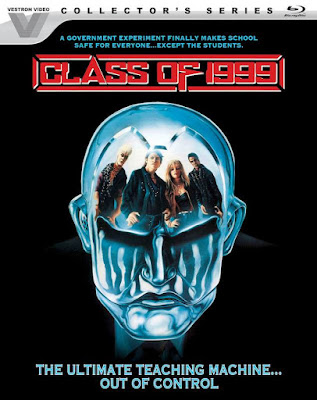 Now this is some fantastic news to wake up to. This cult classic is finally getting the Blu-Ray treatment courtesy of Vestron Video as part of their Collector's Series. No word yet on what kind of restoration it will receive (2K or 4K), but regardless, it will be in 1080p and a far better transfer than anything we've received up until now. And if their past releases (13 to date!) are any indication, we won't be disappointed. This release will also include a decent selection of extra's (full list below), that while not substantial, definitely make it worth the price of purchase.

I love this movie. It's been one I've revisited often and still delivers the Low-Budget Action/Sci-fi/Exploitation goods. The cast is incredible, and original Class of 1984 director Mark L. Lester (Commando, Showdown in Little Tokyo) returns to the directors chair, offering a completely different type of film, going 180 degrees in the complete opposite direction, yet still delivering an even more entertaining film than the original.

The specs via Vestron Video:

And here's #14... "These androids were supposed to educate the students!" CLASS OF 1999 coming January 30th, 2018 from Vestron Video Collector's Series!The time is the future, and youth gang violence is so high that the areas around some schools have become “free fire zones” into which not even the police will venture. When Miles Langford (Malcolm McDowell), the principal of Kennedy High School,decides to take his school back from the gangs, robotics specialist Dr. Robert Forrest (Stacy Keach) provides “tactical education units.” These human-like androids have been programmed to teach and are supplied with weapons to handle discipline problems. These kids will get a lesson in staying alive!
Also starring Patrick Kilpatrick, John P. Ryan and Pam Grier!