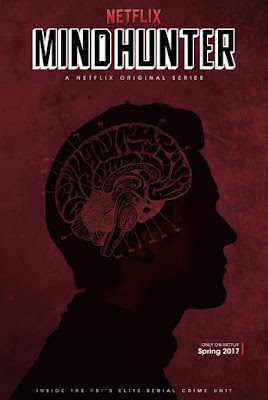 I'll be honest. When Netflix began rolling out these trailers ahead of hit's debut, they did nothing for me. I didn't even pick up that David Fincher was involved, so I'm not even sure that was mentioned in those trailers. Maybe if they had, I would have been far more intrigued because as they were, I didn't even give it a second thought. Even when this first season premiered on Netflix, I still didn't consider actually watching it. It wasn't until a few online friends posted how great it was that I finally gave it a shot, and boy I'm so glad I did. Mindhunter immediately became an addiction, and though I'm not big on binge-watching shows, I have to admit it was terribly hard not to with this one.

Mindhunter takes place in the late 1970's as two FBI agents (Holden Ford and Bill Tench) begin a new program within the FBI bureau studying the minds of killers, trying to figure out what makes them do the things that they do. It's through this series of interviews and investigations with prolific killers of the time that they ultimately coined the term "Serial Killer". Their hope is that by understanding how serial  killers think, they can help solve unsolved murders and in the greater scheme of things, possibly even prevent them from ever happening.

Based on the book Mindhunter: Inside FBI's Elite Serial Crime Unit by John Douglas, David Fincher produces and oftentimes directs while series creator Joe Penhall writes most of the episodes, delivering one of the best, most infectious detective thrillers on TV. While not necessarily in the same boat as the first season of True Detective, I felt it definitely resides somewhere within that same feel and genre. It may not deal with the same subject matter, but their dark, gritty realism is on full display in both series and it's a world we can easily get lost in. Fincher's masterful touch and attention to detail only make it all the more palpable in a very real way.

What makes this series so enthralling is how detailed it is in it's execution. Let me put it this way. If you loved Fincher's Zodiac, then you'll most certainly love this. In fact, Fincher directed a majority of the episodes himself, and they're just as stunning visually as they are emotionally. You get sucked into the worlds of newbie Holden Ford (Jonathan Groff), who's brilliant, yet naive, and Bill Tench (Holt McCallany), a veteran on the force and tough as nails, as they travel the country interviewing killers of multiple people who are currently in prison. And it's in these long moments of interviewing serial killers where Mindhunter really finds it's stride. Not only are these interviews engrossing, intense and stimulating (the Ed Kemper segments being the most fascinating), but the meticulous detail that Fincher applies to every single aspect of this show's production is mind blowing. It all looks and feels like it really is 1977, and the soundtrack is nothing short of amazing. Mindhunter is a visceral punch to the senses from all angles and it's a show you're sure to get hooked on. Just don't say I didn't warn you.

Posted by robotGEEK at 9:26 AM