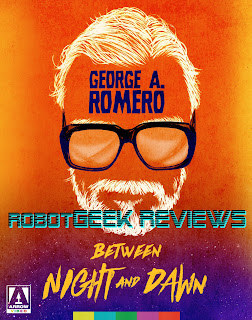 Between the seminal classic Night of the Living Dead (1968), and his socially brilliant zombie masterpiece Dawn of the Dead (1978), George A. Romero directed a total of 4 films; There's Always Vanilla, Season of the Witch, The Crazies and Martin - considered by many to be lost gems in Romero's filmography and films that don't get nearly enough the attention they deserve, especially when you look at how starkly different each one is. Believe it or not, George Romero could make other films outside of his legendary zombie franchise/universe and in doing so, delivered some solid gems in various genre's - a personal favorite being Creepshow.

Arrow Films has culled together 3 of Romero's long-forgotten gems from the 70's (There's Always Vanilla, Season of the Witch and The Crazies), and given them the 2K and 4K restoration treatment, along with a host of extra goodies in a fantastic package that includes a 60-page booklet. Let's dig in. 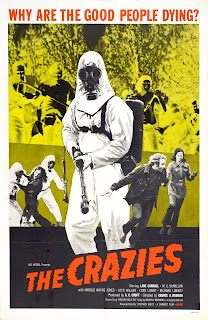 I remember vaguely seeing this one many years back, and not caring too much for it then. Of course, I was young, and couldn't appreciate it fully. Watching it now and it's mind-blowing how nightmarish this film is in such a real way, and was dumbstruck at how painfully intense it is right from it's opening frame. Romero's very unique editing style only amplifies the intensity. The quality of the performances range from strong to not so good, but Romero's gift as a quality filmmaker is unmistakable.

Watching this new 4K transfer is really the only way you should ever see it. Some of the images are haunting, even more so in their crystal clear clarity on this blu ray. With each new sequence I was blown away by not only their restoration, but their brilliance in the context of that scene. This was the first time I ever noticed the strong color palette that marks each scene like a punch to the gut. The colors are vivid and pop with an intensity that can only be truly appreciated with this new restoration. 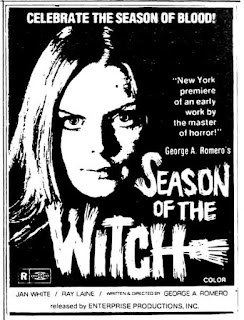 This is one I had actually never seen before, but I do remember coming across it on VHS way back in the 80's at my local mom and pop video store. I remember that terrible, yet slightly intriguing cover, which now I realize is a total misrepresentation of the film in general. But due to the opportunity to review this new Arrow release, I finally got the chance to see it and I'm so glad I did.

Season of the Witch is nothing like I was expecting, and that's a good thing. I intended to sort of skip through it initially, just really checking on it's new 1080p quality, only a funny thing happened. Right from it's opening surreal sequence, I was sucked in and couldn't stop. It was surprisingly good and oddly fascinating. And though there's been countless debate about what genre this falls under, my personal impression is that it's definitely "folk horror", rather than straight-up horror. The way Romero directs this film is impressive and I can tell you that the sloppy original trailer doesn't do the film justice. This is the best presentation available of the film; a brand new 4K restoration taken from the original film elements and it's truly a uniquely fascinating film experience.

* I strongly suggest checking out "The Secret of Jack's Wife" interview. Jan White is such a treat to listen to as she recalls how she got cast, her experience starring in her first film, the nudity issue and it's enduring legacy. "When Romero Met Del Toro" is also an interesting watch, if a bit too long. While neither Del Toro or Romero are quite as engaging as Jan White, listening to Del Toro geek out over Romero and Romero being insanely humble, is fascinating as these two movie giants exchange stories and perceptions of Romero's work. 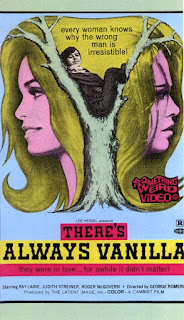 With There's Always Vanilla, Romero's first film after Night of the Living Dead, he decided to take a stab at a comedy/drama/romance and the result is a mixed bag. Some love it, others despise it. Me? I'm indifferent really. I neither love nor hate it personally. It feels like a made-for-tv movie more than anything, and not really the kind of film I would ever revisit on purpose, or associate George Romero with. But that's just me. It has its moments, and the performances are strong, especially from Raymond Laine, who also costarred in Season of the Witch the following year.

The story centers around the emotional relationship between a young drifter and famous local model, who ultimately becomes his sugar mama. When life gets too real, the true instability of their relationship rears it's ugly head.

Arrow Films Between Night and Day Limited Edition Blu-Ray Set Releases in the U.S. on Nov. 14 and retails for $66.99.

If you would like me to review a film or new Blu Ray release, please feel free to contact me at jasonisageek@yahoo.com
Posted by robotGEEK at 9:20 AM