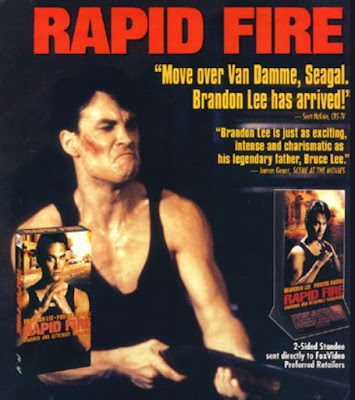 I'll be honest. I've never thought much about this film. And now that I revisit it, I'm completely thrown as to why that was for so many years. Initially, I just didn't feel that it had much of a badass action vibe to it. I felt that it was too freestyle in terms of style, and I felt that Lee deserved so much better for his first breakout solo film. Because it was directed by Dwight H. Little, who did such a fantastic and highly stylized job with Seagal's Marked for Death just a few years before, naturally I was excited, only to be letdown (at the time), which caused me to ignore this for all these years.

But you know, I'm always willing to give films another chance, which is what I did the other day with this one, only to discover that I absolutely loved it this time around. And I made sure to pay attention to all the things I didn't like about it before, yet somehow this time around I didn't feel the same way. I thought it was a slick looking film (better than my memory dictated), with plenty of action and a highly charming and charismatic lead that we lost in his prime. Furthermore, it's the supporting cast of who's who 90's staples that really makes this work to a much higher level than you'd expect. If nothing else, Rapid Fire is a perfect example of the 90's martial arts action genre, of which there are many great examples such as The Perfect Weapon, Hard to Kill, Marked for Death, Sudden Death and so on, before the genre slowly began to fade away into the DTV market exclusively. But man, what an epic run we had in the 90's.

I think the main thing that really works in this film, even if, for arguments sake, everything else didn't (and it did!!!), was how charming and and natural Brandon Lee was. Even when he's being whinny or a jerk, you still like the guy when he turns on the charm. He's a natural in front of the camera, and more so when he's kicking ass and taking names. Who knows how far he could have gone, or big he could have gotten? At least we have the last 3 films he did, the most important. 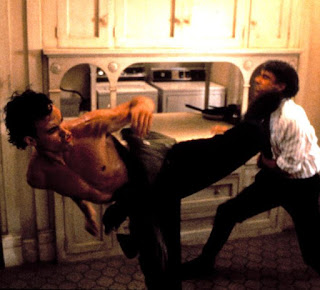 Director Dwight H. Little was thick in the middle of his prime when he directed this. Having just begun his career just a few years earlier, he scored big time with the absurd, yet highly entertaining low-budget action film Getting Even (I love this movie!!) in 1986, where he would then segway into the horror genre with Halloween 4 (1988) and the Robert Englund starring Phantom of the Opera (1989), 2 films that I just don't like very much at all, no matter how many times I revisit them. And maybe that's why he decided to go back to his action roots the following year with Steven Seagal's Marked for Death (1990), one of my personal favorites of Seagal's large filmography. So he would seem like a natural fit to deliver another solid action film 2 years later, this time to really shine a spotlight on Brandon Lee, who was finally getting to make a name for himself after a string of low-budget films, the best being the insanely awesome Showdown in Little Tokyo with Dolph Lundgren. It worked, because while not a box office smash, it did gain some cult status and Lee emerged a new rising action star. Of course, we all know his biggest hit would come with his following film, The Crow, and that would be his last.

As much of a fan as I am with how slick Marked for Death looked, I never felt that way about this one, and it's because of this that I always felt it could have been better, which is surprising since Little used the same Director of Photography, Ric Waite, for both films. While I still agree with that sentiment, it's not nearly as bad as I remember. While a bit more gritty than MfD, there are still moments of camera badassery sprinkled throughout and though there is a lot more use of handheld in here than I like, he does a good job of mixing it with really good camera setups here and there. Sadly, Little's next film would be Free Willy 2 (???), followed by the Wesley Snipes thriller Murder at 1600, before heading straight to television work in a variety of genre's, where he's stayed ever since. Hey, at least we have Getting Even, Marked for Death and Rapid Fire that we can revisit whenever we like. 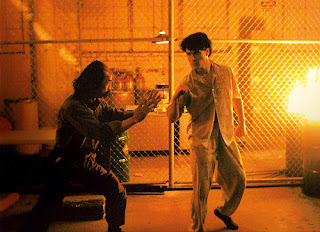 The action is fast and fierce, with enough balance of both gun fights and fist fights to satisfy any fan of either style. And that's really one of the things I liked most about this. There are just as many car chases, explosions, crashes and gun fights as there are martial arts battles, which gloriously comes to a head in the end when Brandon Lee battles legendary badass Al Leong, here having a more significant role than we're used to. While he's not the main villain of the film, he's the big guy Lee has to throw down with at the end and it's fucking brutal and awesome. I don't know for sure, but it looked and felt like Lee either did the choreography himself, or at least helped in designing all of the hand to hand combat scenes, because they're so different from what you would normally see in these types of films. A bit rough, with some interesting techniques all around, yet highly brutal, it showcases Lee's immense physical talents as a martial artist in a different way than you'd expect.

One of the brightest spots about this was it's supporting cast. Powers Boothe is always a pleasure to watch, but interestingly enough, he's not the villain here, but rather a cop who uses Lee's character to his advantage to bring a drug kingpin down. And you'll definitely notice a few other faces like Tony Longo, Basil Wallace (villain from Marked for Death), Kate Hodge, (Texas Chainsaw Massacre 3) Nick Mancuso (Under Seige), Raymond J. Barry and more, but the real standouts are the random Asian actors that were constantly used in nearly every one of these films. With this one, I counted 4 Big Trouble in Little China alums (Al Leong, Donald Li, Gerald Okamura and James Lew) in various small roles, but there cold have been more. And you'll know them when you see them, because they were in every action film back then in some capacity. 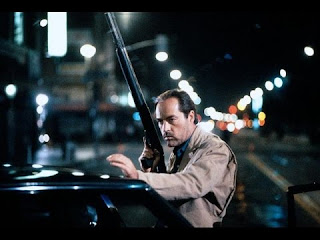 I really couldn't find anything major to complain about. Nearly every aspect of this production knocked it out of the park. Sure it looks and feels very 90's, but that's also one of it's biggest strengths. Films like this that are made today are highly forgettable. Nothing about them ever stand out, yet here is a prime example of why. Solid score courtesy of Christopher Young, tight fight choreography, a ton of action, a totally unnecessary love-making scene, an eclectic kickass supporting cast, and Brandon Lee delivering the goods as an action star lead. Really, you can't get any better than this.

How to see it:
Plenty of releases in all formats except Blu Ray, which would really be nice. But I'm sure it's only a matter of time. The DVD is surprisingly not common, but not that hard or expensive to get either.
Posted by robotGEEK at 11:42 AM