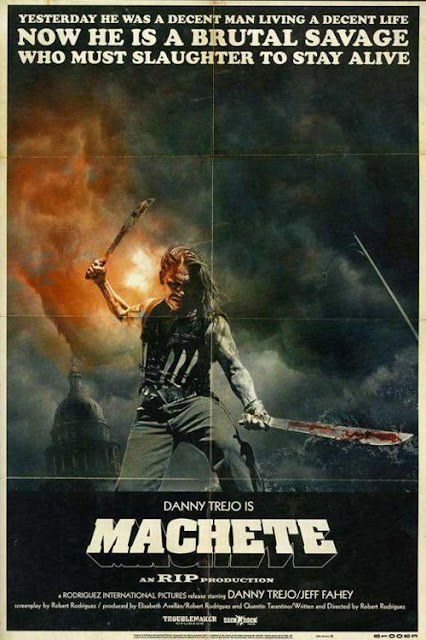 With the recent news that Machete Kills has finally been greenlit and rolling into pre-production as we speak, I thought what better time than to revisit one of Rodriguez's best efforts in a long while and one of the most violent action films I'd seen in quite some time. I love Machete. You know, whether you love or hate Robert Rodriguez's films, you gotta respect the guy as a filmmaker. He makes films the way "he" wants to make them and releases them the way "he" wants to release them. I mean hell, the guy owns a film production company and as special effects company for Christ's sake, further enabling him to make films on his terms. Films like Machete.

Machete is a dizzingly over the top, blood splattered gorefest full of enough action and ridiculous violence that even though they try to tackle a serious issue like immigration, that's the last thing you'll remember after watching this because it's just so much ridiculous and silly fun that whatever the hot button issue might be, you can't take it too seriously. How ridiculous you say? While in the hospital after an accident, he overhears a doctor mention how the human intestine is ten times longer than the human body. Literally minutes after learning this useful bit of information he guts a bad guy, rips his intestine out and uses it as a rope to jump out a third story window swinging down into a second story window in the hospital. Awesome.

Born out of a fake trailer as part of Robert Rodriguez and Quentin Tarantino's Grindhouse experiment / collaboration (and which easily stole the show), Machete tells the story of an ex-federale named Machete Cortez. Hiding out in the United States and working as a day laborer, Machete is hired to assassinate a local politician. When he's double-crossed by the men who hired him, he rages a brutal one-man-war against them and exacts the kind of revenge only Machete can.

Finally, after hundreds of background and supporting roles, Danny Trejo is finally allowed to be front and center and we all need to thank his second cousin Robert Rodriguez for that. He saw something in this guy that nobody else did and with his clout, made him into a fucking movie star. And who else could play Machete like Trejo? Nobody. Hardly ever uttering a line of dialogue or even a single word in the entire film, Danny Trejo carries the full force of the character of Machete and the film squarely on his massive shoulders to blistering effect. I mean, the guy "is" Machete. The guy can make hundreds of more appearances in hundreds of more films and television shows, but for the rest of his career, if anybody ever has a hard time trying to figure out who Danny Trejo is, all you have to say is Machete. But the guy's everywhere. Just as of this writing alone, he has 5 films in the can waiting to be released, 9 films in post production and 5 films in pre production. That's insane!

Machete does suffer from a few problems though. First, it begins with such an insane bloodbath of violence and carnage that the rest of the film couldn't possibly live up to that badass beginning, and it doesn't. It's still incredibly badass, but it doesn't reach the level of badass as that opening sequence. Second, and this was a problem I had with Tarantino's Death Proof, they bill it as a homage to the Grindhouse films, and do a good job of giving it that look and feel complete with the scratches all over the picture and the jumpy frames, but that only lasts maybe 5 minutes in the beginning, as with Death Proof. I wish they both had kept that look and feel throughout the rest of those films and not just teased us with that with just the opening sequences. Ah but whatever. It's a minor issue. One of my main issues with Machete would be that it doesn't "look" like a Robert Rodriguez film. Especially considering this was the first time in a long while where he'd been able to go all out action for a film, but maybe because he shared directing credits with Ethan Maniquis, it just doesn't have the trademark Rodriguez touches or camerawork. Over the course of his career, he's managed to acquire a specific visual style, more prominent in his action films rather than his kid friendly features. There are a few standout scenes here and there for sure, but for the most part it's all filmed rather dull and straight forward. Especially when it comes to that iconic scene at the end of Machete flying through the air on a motorcycle with that massive cannon firing off a hundred rounds attached to his handlebars with a huge explosion in the background. It just seemed to come out of nowhere with no real buildup to it at all. I think that's the scene people remember most from the fake trailer and for it to just happen so fast that it was over just as fast as it had begun and you want more of that badass sequence. From the same guy who gave us Desperado and From Dusk till Dawn, I was hopeful that same guy would have delivered the visual flare so prominently displayed in those earlier all out action efforts. But like I said, that could be due to the fact that he had a co-director. And who knows how much of the look and feel of Machete is actually attributed to Rodriguez or Maniquis.

Visual tendencies aside, this is still one helluva badass and extremely violent, gory and insane action film. Add to that an odd but incredibly satisfying ensemble cast which includes Steven Seagal as a Mexican drug kingpin, Don Johnson, Cheech Marin, Lindsey Lohan (nude), Robert De Niro and Jeff Fahey and you have a film 100% certified Badass.
Posted by robotGEEK at 4:05 PM