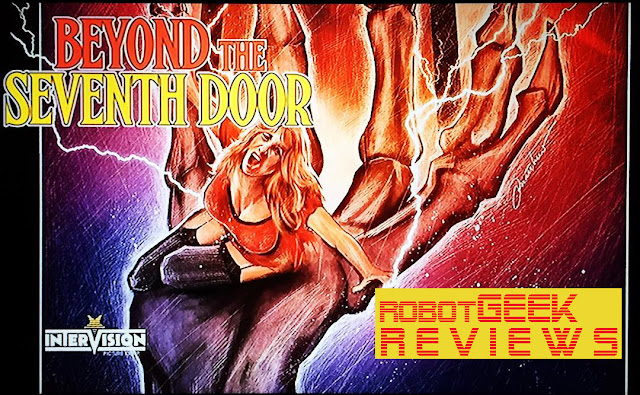 "Spouting his lines in a sometimes incomprehensible Eastern European accent and displaying a complete disregard for the craft of acting, Rockwood comes off completely uncomfortable and twitchy on camera, struggling to portray the (few) emotions demanded by the script and making nonsensical improvisations where required"
- Canuxploitation.com

This highly obscure 80's Canadian thriller comes to us courtesy of best-selling religious thriller author B.D. Benedikt, here making his feature film directing debut. Long forgotten and extremely hard to find on VHS (it's only format until now), this 30 year old obscurity finally see's the light of day thanks to Intervision Picture Corps., which was just released on DVD for the very first time. I love bad flicks, which is surprising that I never even heard of this one until now. Doing some random internet surfing recently I came across a review on Bloody Disgusting that stated that if you like The Room and Dangerous Men, then you're sure to like this one. That's all I needed to hear. I was sold.

Lazar Rockwood (best name ever!) plays Boris, a thief who has recently gotten out of prison. He convinces he ex-girlfriend to help him steal from her current employer, a rich businessman who lives in a castle. Once they infiltrate the castle, they soon discover that the castle has been rigged with a series of booby traps and riddles that they must solve to escape each death-defying trap and move onto the next one to stay alive, culminating with.....The Seventh Door! 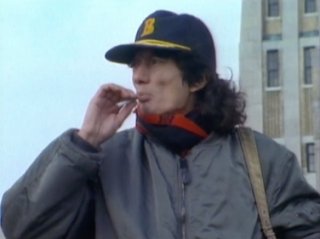 I loved this movie. It's a totally bizarre slice of cult cinema that is just as much baffling as it is entertaining. And it's not entertaining in the way you would expect. While it is indeed a bad movie, it doesn't quite reach the level of unintentionally hilarious classics such as The Room or Miami Connection. Instead, the real draw is the lead, Yugoslavian actor Lazar Rockwood who steals the show from the moment he first appears on screen. You just can't take your eyes off of him. He's such a genuinely unique looking man who delivers one of the most entertainingly awful performances in recent memory. So mesmerized was I by his performance that I had to do some research on him afterwards and was shocked to discover that the guy is still acting today, having appeared in over 30 roles, even as a regular on the Witchblade TV series back in 2001. But it all started with this film, his first starring role, which he begged his friend B.D. Benedikt to write and direct just for him. Make no mistake. Lazar Rockwood is a name you won't soon forget.

One of this films many attractive qualities is that despite it's lack of any sort of budget, there are some things that work surprisingly well. For starters, the score by Michael Clive, Brock Fricker and Philip Strong is pretty damn fantastic. While it's not a whole lot of music, mainly just reusing the same theme over and over, it's really good. As much as I loved it though, I doubt there's enough music to warrant a soundtrack, as cool as that would still be anyway. Another surprisingly solid element is in the booby-traps set and the riddles they must figure out in order to escape. I'll give Benedikt props for being creative with the traps. While he may not the best writer of natural dialogue, he does come up with some inventive gimmicks that made me feel like this was almost a prequel to the Saw franchise. Mind you, that's not to mean in gore content, because there is none, but in the riddles and traps. Not that it's mind-blowing ingenuity or anything, but for a no-budget flick shot almost entirely in underground rooms and vaults, it's somewhat impressive.....considering.

Despite all of these things, it's really Lazar's performance that keeps you invested. His delivery is a sight to behold. It's too painfully obvious that he is not actor, yet he tries so hard in the least convincing way possible. His heavy accent ever present, he struggles through his dialogue and delivery in the most hilarious and fascinating way. His complete lack of chemistry with his co-star, Bonnie Beck, who portrays his ex-girlfriend, is as much hilarious as it is awkwardly uncomfortable. His constant chain-smoking (literally 2 drags before he puts it out), loud wet-lip-smacking sounds, and constant body-twitching are characters unto themselves. Really, you have to see it to believe it. His performance alone makes this experience almost amazing.

Beyond the Seventh Door is a completely absurd and ridiculously constructed bizarre set of sequences that make little common sense and play out a bit too long to stretch out it's short 77 minute run-time. But it's because of all of it's inept qualities, unusual sensibilities, cringe-inducing chemistry between the two leads, hilarious dialogue and Lazar Rockwood's totally bizarre performance that nearly puts Tommy Wiseau to shame that make it totally a trip worth taking. Shut off your brain and enjoy the ride. You'll be glad you did. 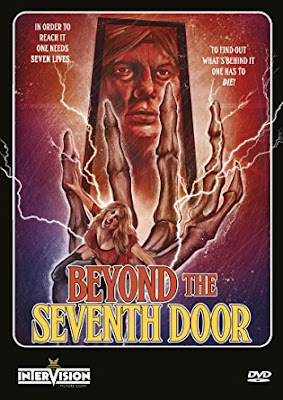 Intervision Picture Corp. did a good job on this release. Considering it's never seen the light of day outside of it's mega-rare release on VHS in the mid 80's, it's likely the best we'll ever get. It's not necessarily top of the line DVD quality, but I'm almost certain that they didn't have the best resources to work with considering it was shot on low-grade film 30 years ago. It is however, a far better looking transfer than it's original VHS presentation, even if it is still in a 1:33.1 full frame aspect ratio. The sound is surprisingly good, with the score being a lot louder than the dialogue.

- An audio commentary by writer/director B.D. Benedikt and star Lazar Rockwood, moderated by Canuxploitation's Paul Corupe.
- "Beyond" Beyond the 7th Door: A fascinating new featurette with new interviews of B.D. Benedikt, star Lazar Rockwood and Canuxploitation's Paul Corupe.
- "The King of Cayenne": An appreciation of legendary Toronto eccentric Ben Kerr.

PLEASE take the time to watch the featurette "Beyond" Beyond the 7th Door. In it we follow Benedikt, who apparently works in a movie theater now cleaning up the popcorn from the seats and installing new films into the projection machine. Highly eccentric, he discusses what led him to make this legendary Canadian classic as well as eventually becoming a best selling author in the religious thriller category. BUT, the highlight is hands-down Lazar Rockwood's interview, where he confusingly attempts to teach the art of acting to the cameraman by explaining that observing a cat watching a bird will teach you all you need to know. Only in the most bizarre and long-handed way possible. It's a true gem of a moment and you really need to see it to believe it. Ultimately you walk away with the notion that these two guys are truly a bit crazy in real life as well, not just in how they make movies.

Beyond the 7th Door is a MUST BUY if you're a fan of Bad Movie Night. No question. And as luck would have it, it's insanely cheap right now on Amazon for just $11.99. Buy it. Buy it nooow!!!
Posted by robotGEEK at 6:14 PM