A Nightmare on Elm Street 4: The Dream Master 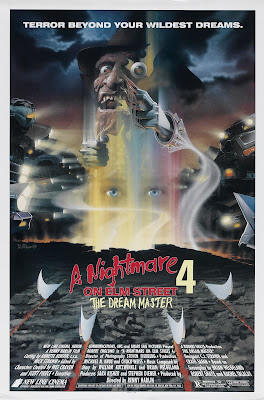 What's funny about these Elm Street films is that after Part 3, they're not even horror really. They kind of become pure fantasy. I mean, they certainly try for "some" horror elements with this one, but really it's not scary at all and try as they might to make it scary, they just don't succeed.

Does that mean it's a bad film? Nope! Not in the least, because it does have a lot of things going for it that surely make it enjoyable. So let's begin.

I have fond memories of seeing this in the theater. Back then my brother and I were die hard horror fans and just ate this shit up. I'll bet I even have some old Fangoria magazine with Freddy on the cover related to this movie somewhere. But when you look at this film with older and wiser eyes, you see how different it is. Your memory remembers the cool shit, all the crazy cool and sometimes odd or hilarious things Freddy does when he pops up here and there, but when you look at it as a whole, it just doesn't make any sense at all. To me, it seems that starting with Part 3, they just started making up the rules as they went along. With Wes Craven's original, he only got to you in your dreams. Yea you could physically pull him out of your dreams, but it always stuck with that simple rule. But now it seems like they just kind of make shit up as they go along because it looks cool and throw all logic in terms of how all this is supposed to happen out the window. But hey! Whatever. It's fun. It's got some killer sequences and some cool 80's tunes.

Unlike the Friday the 13th films which I've been trying to revisit in chronological order, it doesn't seem to be necessary with this franchise. I mean, these films pretty much don't seem to work in any kind of order so when I throw one random one on, it's like watching a horror film all on it's own without the benefit of a franchise to kind of keep you up to speed with what's going on. Nope, not here. All you have to know is he was a child killer, then he was murdered by angry parents, and now he disperses revenge on the offspring of those adults who killed him many years ago. Somehow, in some way he manages to find a way to return after being destroyed in the previous film. He's so slick that Freddy.
Yes, the character of Kristen (formerly played by Patricia Arquette and now by Tuesday Knight) and her friends return in this entry, but they pretty much tell you what happened in the last film during their many talks so if you never saw Part 3: The Dream Warriors (shame on you!), you'll still get caught up pretty quickly.

The Good:
Renny Harlin in the directors chair. You know, once upon a time Renny Harlin was a bonafide badass A-List director. Yes, it's true. For a period of 5 years from 1988 to 1993 he was the hottest director working in Hollywood. Pretty much blowing us away with Prison, "if" you were lucky enough to see it since it was a Direct-To-Video release here in the U.S. But you can see the talent in Prison, and it's what got him his gig here, which led to future big budget projects like Die Hard 2, The Adventures of Ford Fairlane and Cliffhanger. So here with this Elm Street entry though a lot of what goes on seems to have been made up on the spot with everything thrown in but the kitchen sink, it looks damn good with Harlin giving the film a better-than-it-deserves polished look. Throw in some interesting kills and some decent 80's rock tracks and it's a good time. Now are any of the tracks as good as Dokken's awesome "Dream Warriors" track for Part 3?? Hell No! But it's decent stuff.
Kevin Yagher's Freddy makeup effects. This was the coolest he ever looked and how I'll always remember him when I think of Freddy. I believe this was the last time Yagher worked on Freddy's makeup because in Part 5 he looked completely different and quite frankly, he looked like shit.

The Bad:
Freddy barely comes out in this. Seriously. And when he does, so much of his dialogue was dubbed in afterwards because he'll be standing there and though his mouth isn't moving, he seems to be speaking lines of dialogue.
Tuesday Knight as Kristen. Maybe it's just me, but what a severe downgrade in casting and she just annoys the hell out of me for some reason.
Nonsensical plot. Most of the time it just seems like outside of the written script, it felt like director Harlin and company would just come up with interesting and unusual kills or sequences because they looked cool. Maybe I'm wrong and everything was in the finished script before they started filming, but I'm just sayin'....

Overall, one of the better entries for sure, just not crazy cool like Part 3: The Dream Warriors was. But a helluva lot better than the next one, which was so horrible I couldn't even finish it.

Posted by robotGEEK at 9:59 AM