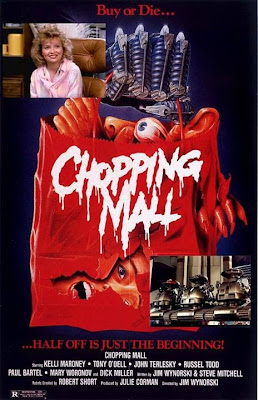 So here's a bit of fucking awesome news via KillerFilm.com! One of my favorite horror films of all time, one that not nearly enough people have seen, will be getting a theatrical re-release for October, hitting possibly over 200 screens nationwide. But wait! That's not all! Apparently there is also a Blu ray release planned for next year! No specifics yet as writer/director Jim Wynorski simply stated recently on his Facebook page that:

"The ink is still drying on the contracts and we'll soon be making a 4K transfer for theatrical re-release in October. A retro Halloween special".

Obviously this is very exciting news. I just don't think enough people have seen this or know how great it is. Released in 1986, it screams awesome 80's cheesiness, but in a good way because believe it or not, Wynorski shot the hell out of this thing and it ultimately ends up being so much better than you expect it to be. One of the best "So bad it's good" horror films out there and I can't wait to see this baby in widescreen for the first time. Sweeeeeeet.

And I gotta be honest, with the week I've been having (Hell), this has certainly brightened my day. And you can bet your ass I'll be purchasing that Blu ray when it hits sometime next year. I hope they fill it with lots of Special Feature goodies as geeks like myself eat that shit up.  I'll be sure to post more info as I get more of it. In the meantime, here are some links to my original review back in February of this year and another link to some rad VHS covers of mine. Screw it, I'll throw in the trailer as well. But I'll throw in 2 different trailers; the theatrical and a badass fan-cut trailer. Enjoy!