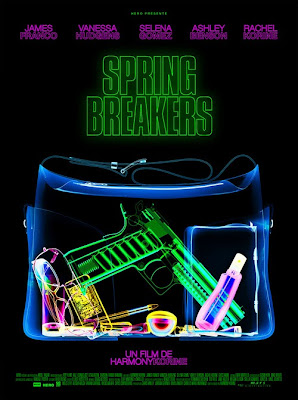 Hhmmm, I'm still a little on the fence about this one. I had no desire originally to see it personally, more so after learning Harmony Korine (never been a fan of his work) was behind the camera. But I was urged by a friend saying that I would be "Floored by it". That it's "Not the kind of film I'm expecting it to be". Well, yes and no.

Spring Breakers was not the film I was expecting it to be, but it didn't blow me away either like I was told it would. Initially, the trailers led me to believe this was going to be a fun girls on spring break vacation kind of film full of party scenes and lots of drinking. Yea, that's part of it and there are plenty of those scenes in here, but it's also an extremely dark, violent and unconventional film that kind of throws you for a loop considering it stars Selena Gomez, Ashley Benson and Vanessa Hudgens. I liked that about this film though. Ultimately it had a grittier True Romance kind of vibe, but not nearly as entertaining.

What works for me is some of the stylistic choices writer/director Harmony Korine (Kids, Gummo) used. Lots of crazy neon colors and gratuity in terms of well, really everything. It's just so in your face and sometimes uncomfortable that it's hard not to be affected by it in some way. But that's not to say he did a good job directing, because he didn't. Maybe there were a few cool shots here and there, but for the most part none of it really worked for me. Too much hand-held camera work and really odd and perplexing editing choices that had the film going back and forth for no apparent reason.
Also, one of the, if not "the", best things Spring Breakers has going for it, and I can't believe I'm saying this, is James Franco. Love him or hate him all you want, but when the guy is firing on all cylinders, he can turn out quite a performance. Here he owns this fucking movie. Maybe half of the people out there will see this just to get a glimpse of any of these female leads nude or doing something shocking, but when you leave this experience, you'll more than likely remember Franco's all for nothing performance as a sleazy wannabe rapper/drug dealer who looks an awful lot like Kevin Federline. So often I forget that the guy can actually act because half the time he seems to phone it in like in Oz: The Great and Powerful (awful film and lazy performance by Franco), until I see a performance like this out of him. For my money, he was the best part of Spring Breakers.

So now on to what doesn't work for me. Pretty much everything else. The annoying rap music. The lazy camera work. The girls. Yea, I said it. I'm all for cute sexy girls running around in bikinis robbing places and shooting guns, but when they all look like 15 year old girls? No thanks. Well, maybe except for Rachel Korine (Harmony's wife). She looked the most mature out of the bunch. And you know, I've just never liked Korine's films at all, whether he's just writing or both writing and directing. I'm all for spirited independent filmmaking, but the guy never came across as talented to me. And honestly, most of what I've seen in his films seem aimed at shocking you rather than entertain. That might be what some people are into, but not me. I've seen him in interviews and he seems like an okay guy, but from a cinematic standpoint, I just don't get his work. This also happens to be the first film he's done that's actually gotten a theatrical release. I honestly never thought there would be the day. Throw on top of that the fact that some Disney starlets star in this thing and well, it's just all so very odd/surreal to me.

If I were to recommend this film to anybody, it would only be to see one of Franco's best performances and nothing else. But that's just me and those are my two cents...
Posted by robotGEEK at 12:30 PM