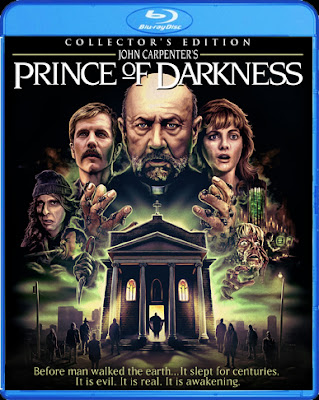 I love this film to death. Shockingly, this was one I had never gotten around to seeing until recently for the first time for whatever reason. I really don't know why, I just never did. But when I finally did I was blown away. This is easily one of John Carpenter's BEST films and a true testament to the "less is more" technique of old school filmmaking. After coming off a string of big budget flops, he wanted to get back to his roots and Prince of Darkness is a true testament to his talent as a filmmaking genius. The story and the techniques he uses to tell it are simple, yet extremely effective with Prince of Darkness. While Prince of Darkness got no love during it's initial release (as is the case with many of Carpenter's films), it's grown such a fan base and cult status throughout the years and is easily considered one of his best films.

Again, Scream Factory is knocking this release out of the park as with the continuous releases of classic and cult classic horror and sci-fi films. Check out their website for a list of films you never thought would get the Badass Blu ray treatment. Scream Factory knows how to do it right. I already own many of their recent releases and you can bet your ass this will be mine.


You can check out my original review of this masterpiece of horror HERE.

Here are the specs from the Scream Factory website:


SPECIAL OFFER: Order this directly from ShoutFactory.com and receive an exclusive 18"x24" poster featuring our newly commissioned artwork! Only 400 have been printed, so these are available while supplies last.

It is evil… It has awakened.

Master of horror John Carpenter (Halloween, The Thing) directs this terrifying battle between mankind and the ultimate evil.

A group of graduate students and scientists uncover an ancient canister in an abandoned church, but when they open it, they inadvertently unleash a strange liquid and an evil force on all of humanity. As the liquid turns their co-workers into zombies, the remaining members realize they have released the most unspeakable horror of them all. Terror mounts as the team must fight to save the world from a devilish fury that has been contained for over seven million years.

Posted by robotGEEK at 7:37 AM