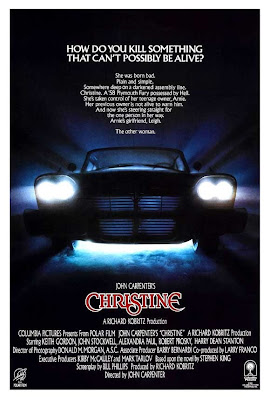 John Carpenter's Christine was released 30 years ago; and it's taken me 30 years to finally sit down and watch it. No real reason why I suppose. It's just always been one of those films that always seemed to pass me by because a movie about a killer car never really appealed to me. Not my younger self anyway. But I'm glad I held off on watching this for so long because seeing it the other night, I knew that I would not or could not appreciate it the way I do now. I probably would have thought it was boring, being the dumbass that I was.

I should mention that when I finally sat down to see this, I was having a particularly bad weekend. But you know what? There's nothing like a great film from a master craftsman to brighten your mood. Especially when it's John Carpenter, adapting a Stephen King book, about a sentient car, that takes place in 1979. Awesome.

I had been reading up on Carpenter and his filmography from a Fangoria tribue issue I got recently and as I was reading it, it occurred to me that I have yet to see everything he's ever done. I guess I've always known that, but it just felt so wrong as I read further and further into his filmography and I immediately set out to visit the films I never got around to seeing, and revisiting the ones I only saw once and don't really remember too much of........starting with Christine.

So as you can already tell, I love this film. So I'm just gonna jizz all over it right now. This is probably one of the best films I've seen in a very long time. I see a shit-ton of films, and while I enjoy a good chunk of them for various reasons, this one is definitely one of the best for so many reasons. For me, Christine gets so much right in terms of how the film was made. I haven't read Stephen King's book, so this is all based purely off the film. But fucking John Carpenter is the man. I just love the way he shoots in extreme widescreen. Directors rarely ever went for the scope he did when framing his shots, and it's just so damn apparent right from the opening scene that you're in for something special; and boy are you ever.

Having always been a huge Carpenter fan, I've always considered a few of his films to be some of my all time favorites. They Live, The Thing, Prince of Darkness, Assault on Precinct 13, The Fog, Big Trouble in Little China, Escape From New York, all some of my favorite films. Holy shit, now that I think about it, I realize I haven't done reviews for most of them yet. But anyway, back to Christine. I can now add Christine to this list and hopefully a few more when I get through the rest of his stuff. And let me tell you, this goes up way on that list if I were to do a "Best of Carpenter", because it's that fuckin' good. The visuals, the pacing, the cast, the classic Carpenter score, the effects (!!!), hell even just the time it was made (1982) just all come together and work so perfectly and compliment the film in the best way possible.

First off, this film is visually stunning. Gorgeous!! It's not just the fact that he shoots in extreme widescreen, but it's in the way he frames them, where he puts the camera, where he moves it and more importantly, how he allows it to all play out properly. I never would have imagined that this little early 80's horror film could look as stunning as this, with some truly iconic scenes to boot. Like the sequence of Christine engulfed in flames chasing a sorry ass dude down a lone country road; aaaaaaamazing. And the "reconstruct" sequence. I almost flipped. And as if those sequences weren't cool enough, Carpenter's pitch perfect score only adds that extra layer of awesome.

Surprisingly, there wasn't much blood, if any, in here. There are some rad kills for sure, but coming off a year after The Thing, you sort of expect some gore. But that's not a bad thing. This is a different type of horror film and though it's not overindulgent in gore, it's still got some violence nicely done, even downright creative.

The cast is pretty spot on in this. They all do their jobs and come off as the stereotypes they were hired to portray. Nothing outstanding, but nothing subpar either. I think the real standout would be Keith Gordon, who plays Arnie, the guy who becomes obsessed with Christine. Now a successful film and television director, he started out acting and I'll always remember him as Rodney Dangerfield's son in Back to School. Yea, that guy. Here he does an awesome transformation from certified geek to dangerous psycho with the help of Christine. He doesn't overdo it, and convey's all the elements of both personalities note perfect that even when he's become a darker person, you still feel sorry for him.
And remember the main guy from another 80's classic My Science Project? John Stockwell. He's in this too as Arnie's best friend. Only this guy is actually a cool jock. How are they friends? I don't know; they just are. Believe it or not this guy is also a successful film and television director now as well, with his biggest claim to fame being Crazy/Beautiful and receiving accolades for that surfer movie Blue Crush; mainly for the stunning photography in that one. But wait! Everyone is great in this, with the veterans like Robert Prosky and Harry Dean Stanton bringing that extra spice to the table. The only thing I wish they had done was show more of a young and hot Kelly Preston. She literally shows up, teases you with her hotness, and then disappears. Bah!

I think it's time to wind things down and bring this to an end. Sorry for all the girly love for this thing. It was just exactly what I needed at just the right time to impress me the way that it did. I rented this since I wasn't sure if I was going to dig it or not, but I immediately got on eBay and picked myself up a copy because this has high rewatchability for me. Is it perfect? No. I think my main issue would be that in all honesty, while awesome and satisfying, it's not scary in the least. Was it supposed to be scary? That's open to debate, because it could very well just work as a straight up thriller. But I think it's always been marketed as a horror film soooo....
And Arnie's transformation from geek to hip, brooding and troubled soul who suddenly is able to get the hottest girl in school and happens literally from one scene to the next without any real progression or explanation. One day he's a nerd, the next a hip dude with the hottest girl and the coolest car.

The Special Edition DVD from 2004 is a solid release and the one I bought. It comes with 3 featurettes that get into every aspect of this film and it's production. Fascinating stuff!! I understand there was a Blu-ray release of this, but it was such a limited one that it literally sold out in hours of it's release and now I see them going for insane prices on eBay and Amazon. I think I'll stick with this DVD release. The picture quality and sound are great, and it's got a lot of special features. What more could you ask for?

Posted by robotGEEK at 6:27 AM