Dark Angel AKA I Come In Peace comes to Blu ray! 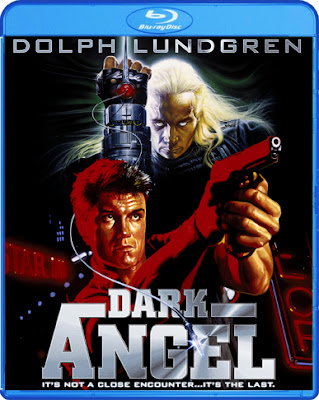 Shout! Factory has done it again with another amazing release. Dark Angel AKA I Come in Peace (as it's known here in the states) is a film that had never gotten the proper digital release until about a year ago with it's first ever DVD release by MGM On Demand. But here we finally get a good release, complete with a few extras and in glorious widescreen.

This has always been one of my favorite action films. Don't know anything about it? All you have to know is that it was released in 1990 (one of the BEST years for action cinema), and is one of 3 theatrically released films by legendary stunt coordinator Craig R. Baxley (Action Jackson, Stone Cold) as director and it stars Dolph Lundgren in his prime (right between The Punisher and Showdown in Little Tokyo), as a cop chasing an alien that's landed on Earth and is killing people. Yea I could get more into it, but do you really want me to? Hell no! See it for yourself. It's full of ridiculous action and stuntwork, awesome 90's style setting and definitely has to be one of the few films with as many explosions as this one has. It's just ridiculous, and completely fucking awesome.

Dark Angel comes out August 26 and you can order it directly from Shout! Factory HERE, or over at Amazon. In the meantime, check out this trailer to wet your appetite.

Posted by robotGEEK at 6:26 AM