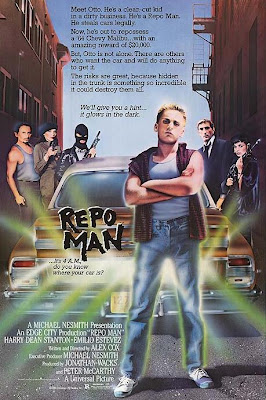 So, Repo Man. You won't believe it, but I only just saw this one for the first time a few days ago. I know, I know. For whatever reason it's just always been one of those films that have always passed me by. The poster never did anything for me, and truth be told, I've never seen a trailer or ever even read up on anything about it. All I really know is it stars a young Emilio Estevez as a..ahem...repo man, and that it was one of cult filmmaker Alex Cox's first films. Any good? Well let's see.

I think writer/director Alex Cox will almost always be known as the guy who did Sid & Nancy, and maybe secondly for having made this. But has he ever been known to be a good filmmaker in general? Has he ever done anything else that people talk about or ever mention? Nope.

Here's the thing. I felt Repo Man had so much potential, yet didn't fully satisfy me like I hoped it would. It's a cult film in every sense of the word, but that doesn't mean it's awesome. All the ingredients are there, but director Cox just doesn't seem to be able to mix them properly. And the unevenness of it all leaves the film kind of a jumbled mess. Don't get me wrong, I dig the concept. As far out there as it is, it's pretty rad. The tone, setting (early 1980's punk era), style, casting, effects, it all works. It's just the way that they're all put together by Alex Cox and not utilized to it's full potential that I think a more experienced director would have been able to achieve that really gets me. I can understand the whole "cult" status thing with this. It's definitely an experience, no doubt about that. But again, you can't help feeling underwhelmed. And I know it's not just me. My viewing partner also felt the same way. Like "Hhhhmmm. I thought it would have been better".

I hate beating up on films though. I really do. I almost always find something to like about any film, even the worst ones. And I don't hate this film. It has a lot of attractive qualities. My deal is just that overall, it could have been a lot better. A better flow perhaps? Something. It just never reaches that level of awesome, but it could have, which is the most frustrating part. But the film does have a following and is almost always listed somewhere in almost all "Best Cult Films" lists. Hell, I bought into it so much that I just went out and bought this blindly without knowing anything about it really. Now I kinda wish I had just rented it, but oh well.

I think one of the things that surprised me most, other than watching Emilio Estevez trying to be punk, was that the film is just wacky. I think I was expecting maybe surreal, but with a slight sense of normalcy. Nope, this one is flat out weird almost right from the start and it only ends off the charts. Hey, I'm not saying that's a bad thing. I can dig a trippy and fucked up film like the next guy, but something always just felt "off" the entire time. Aaahhh, I just couldn't shake that feeling. But anyway, those are my thoughts. Take them as you wish.

Posted by robotGEEK at 7:02 AM