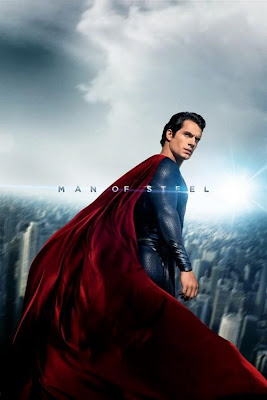 While I was initially excited to learn they were rebooting the Superman franchise after Bryan Singer's failed attempt years ago, once I saw the creative decisions being made and then finally seeing the trailers, I was less enthusiastic. Maybe that's why it took me this long to finally get to the theater to see it? As of this post, it's already been out 11 weeks, and it's taken me this long to get out there to finally see it.

Here's the thing; when Singer attempted to reboot the franchise with Superman Returns, he went about it the wrong way. It was too slow, way too melodramatic and there was hardly any action, for a Superman film anyway. I'll admit, the film looked beautiful. You can tell Singer put his heart and soul into every single frame. In fact, I'd have to say it's probably his most visually impressive film to date, but unfortunately it wasn't the type of Superman film we wanted. We wanted to see Supes kick some ass, not pine over his lost love (an annoying Lois Lane) and his son. And while we're at it, let's bitch about that bit of casting. Kate Bosworth was just all wrong as Lois Lane. And she played her like an annoying ice cold bitch. And that whole thing with her son was an interesting touch, but it seemed to piss a lot of people off. On the plus side though, I always felt Brandon Routh was pitch perfect as Clark Kent/Superman. I actually wished he had continued with that character. I thought he was great. Not sure why most others didn't feel the same. Was it because he resembled the late great Christopher Reeve too much??

So now back to Man of Steel. I don't like the design of the suit, so that just puts me off right away. And the teaser trailers they were showing one after another reminded us of another somber, brooding melodramatic Superman film again. I just kept thinking "Again?!". And the shaky-cam. I noticed a shitload of shaky-cam. So I was worried. It certainly didn't "look" like a Zack Snyder film. The same Snyder who meticulously shoots scenes to their most beautiful potential. Say what you like about his films, but the guy can shoot. Sure Sucker Punch was an unsatisfying and misguided mess, but holy shit there's some amazing shots in there. Some amazing imagery. But then they started rolling out endless trailers one after another; each showing a bit more action than the last and finally revealing he does in fact have a villain to fight in the form of Zod.

So what did I think? Right off the bat Man of Steel got everything right that Superman Returns got wrong. Right away you're thrown into some awesome action and destruction, only to have it one-uped repeatedly with every action set piece that follows. And man, when it gets to the third act, it's just insane. Like, almost too much. And they don't make us go through the history of how Clark Kent AKA Supes came to be. Instead they tell that part of the story through flashbacks (smart move) and instead reveal a lost Clark Kent learning where he came from and becoming who he was meant to be; only in a much faster beat. And that's one of the best things about this film. It never really slows down long enough to ever get bored. So much so that when it's finally over, you're exhausted. And really, that's the way to do it.

The Good:
The casting in this is top fuckin' notch. I'll be honest, I've known Henry Cavill from other stuff, but just couldn't picture him as either Clark Kent or Supes, but holy hell he was pretty damn outstanding. So it just goes to show you, don't judge a book by it's cover. Hear that Ben Affleck/Batman naysayers?!
And everyone else in here is just amazing. Really this is just a reminder as to why they're as badass as they are in what they do. It just seems so effortless, yet just inspired casting all around. Russell Crowe as Jor-El, Kevin Costner as Jonathan Kent, Diane Lane as Martha Kent, Michael Shannon ripping it up as Zod, Christopher Meloni as Col. Hardy, Laurence Fishburne as Perry White. I mean, the list just goes on and on and they were just perfect. I think my only hesitation is with Amy Adams as Lois Lane. I love her. I've always enjoyed her and think she's insanely hot. But I think it might take some time for her take on Lois to grow on me. Maybe it's just because Kate Bosworth just left a sour taste in my mouth or maybe because I'll never really be able to see anyone else play Lois other than Margot Kidder. I don't know. I've got problems. But Adams was fine and all, and HOT, but somehow I just didn't take to her character as much as I did the others.

The effects work is just unreal. I mean, it's just insane. I can't even imagine having to try and plan that shit out, and then to make it look so good and flawless. It's pretty spectacular from every angle in terms of the effects work.

Screenwriter David S. Goyer is slowly becoming the "it" guy for Superhero films. Sure not everything he writes is top notch; after all he did write the Nick Fury TV movie and some DTV stuff, but he's also responsible for some badass films such as Death Warrant, the Blade trilogy (among others), and along with Christopher Nolan, single-handedly reinventing the Batman franchise. He's got a knack for keeping the story running smoothly and also for keeping things fresh. Yea we all know the Superman story and have seen it done many, many times, but he surprisingly found a way to retell it without it seeming like a rehash.

The Bad:
The shaky-cam. I can't believe that's actually something that I'm complaining about in a Zack Snyder film because every one of his films have shown an even steady hand when it comes to filmmaking. In fact, he's one of the few left that I was always sure of that would never revert to that crappy style of camerawork. So I'm disappointed to say the least. And with a film this big, the shaky-cam technique was the last thing I'd expect. Not cool man, not cool. What's even more frustrating is that every once in a while you'll see some nice shots. So for whatever reason he actually tries and will compose a beautiful shot, but then 80% of the time go back to hand-held shaky-cam. I don't get it. Why start this style with Man of Steel when all throughout his career he's done the exact opposite?

As I stated before, I didn't like the design of the suit, nor the design of Krypton or the outfits they all wore. It all looks too overdone and with a "seen that already" feel to it. Like, you could pick a big budget effects film from the last 10 years and Krypton looks like it could have fallen into any one of those worlds. I think I'm just stuck on the simplicity of the world and costumes created in Richard Donner's original. In this one it just all seemed too much.

So there go. Regardless of my minor gripes, this was a blast and a helluva lot of fun. I mean, this movie really just had it all in terms of big budget entertainment and it never once felt empty like so many of these do nowadays. For a Superman film, better yet, a reboot of the franchise, they knocked this one out of the park.
Posted by robotGEEK at 7:10 AM