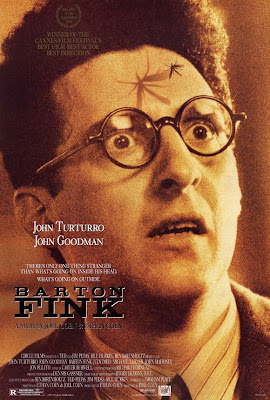 Right now I'm on a Coen Brother's kick. I've devoured a few these past couple of weeks, Miller's Crossing being my favorite so far, and I have many more to go. Yes, I've seen most of these already, but it was mainly when they first hit theaters or VHS and I was too young to appreciate them the way I can now. So I'm kind of re-submerging myself in all things Coen Brother's to see where I stand with there films because there are a few I have never seen, and there are a few that just never worked for me (A Simple Man, The Man Who Wasn't There), but maybe watching them again will give me a fresh perspective? I don't know. Let's see. I also have to thank my buddy and fellow film blogger Francisco over at The Film Connoisseur . He recently did his take on Barton Fink and his enthusiastic review got me to push this one ahead of all the others. You can check out his take HERE.

When Barton Fink came out, even though I was only 15 at the time, it was a big deal for me. This was by the same guys who did Raising Arizona, and who had also shifted gears (much to my delight) with Miller's Crossing the year before and showed me a filmmaker doesn't have to stick to just one genre. Though many filmmakers do in fact do this, I don't think there are any quite as diverse as the Coen Brothers. I was 15, and I'm 37 now, so my memory is fuzzy. But what I do remember is that it was a dark and surreal film. A film that unless you were an avid lover of cinema, you were just not gonna get it. Nevermind the fact that it swept the Cannes Film Festival in 1991 by winning Best Actor, Best Director and the Palme d'Or (Best Picture), because in normal circles that don't mean shit. Especially in 1991. Most people didn't even know what Cannes or the The Palme d'Or was until Pulp Fiction implanted those terms into our consciousness 3 years later in 1994. Only then were we aware that that was kind of a big deal.

What's funny is that this is streaming on Netflix, but when I started it I noticed immediately it wasn't in widescreen. I gave it about 5 minutes and just couldn't do it. It would have been an injustice to Joel and Ethan Coen to watch this beautiful and intricately shot masterpiece in full frame. So I waited. I went over to my one and only remaining video store and rented it so that I could watch it in it's proper aspect ratio to get the full effect; I'm hardcore that way, and my life is all the better for it. Not that you care. But seriously, don't watch this in full frame.

Barton Fink (John Turturro) is a big time New York playwright. He takes a job in Hollywood signing under contract to write a wrestling picture. Struggling with writers block, Fink encounters strange goings on at his dive hotel and even more so, with the people he meets.

Yes, a damn synopsis. I know; forgive me. What's interesting about this film is that it seems to have so many different interpretations by almost anyone who sees it. A lot can be said about how almost everything that happens in this film is a metaphor for something. I can see that. But is that where my mind was going as I watched this? Nah. I mean, all this stuff very well could have meant something like the crappy hot hotel he stayed in was a metaphor for hell or purgatory or whatever, and that this and that meant this and so on, blah blah blah. I'll bet even the constantly peeling wallpaper is supposed to mean something considering .......well you should watch it first before I get any further into that. What I saw was a film about a guy with a big enough ego that he took a job he was sure he could do, because according to him pictures were a step down from plays, but became painfully aware almost immediately that he had made a big mistake and now under contract he's struggling to do anything to be able to write down even the first paragraph of a screenplay he's already been paid to do. Meanwhile (WARNING: SPOILERS!), he finds himself caught in the middle of an investigation of a serial killer and the film takes an even darker, more serious turn. And it's really this third act that took me by surprise. I was already enjoying the hell out of this dark, surreal, sometimes funny, sometimes odd, sometimes serious tale of a man slowly becoming unraveled as he tackles his first paying assignment, but then it took this unexpected turn and I liked it even more. (END SPOILERS)

I've always had a love/hate relationship with the Coen Brothers. While I can absolutely love some of their work, most notably films like Raising Arizona, Miller's Crossing, Barton Fink, Fargo, No Country For Old Men, The Big Lebowski, other's have left me underwhelmed and/or confused like A Simple Man (only they can get away with making a film like this), The Man Who Wasn't There (another example), and Burn After Reading. But there are a few that I have yet to see and even some I don't remember much about, like Blood Simple and The Hudsucker Proxy for example. But there's nothing like the feeling of being blown away after a viewing, which is what Miller's Crossing and now Barton Fink have done. I was literally floored by these two films in completely different ways. It's one of the best feelings in the world.
Posted by robotGEEK at 7:01 AM