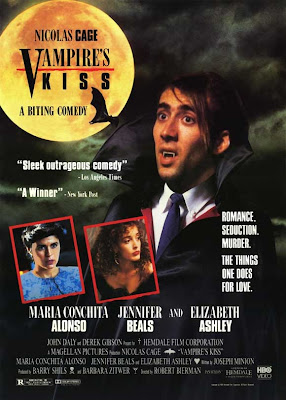 Has anybody actually seen this? Am I missing something with this one? Because honestly, try as I might, I just don't get it. Was this supposed to be funny? Or dark? Or was did it start out as a "supposed" comedy and somehow inadvertently went off in different directions? Because I honestly don't know what this was trying to be. I really don't. And I'll give you a quick heads up, there is going to be a lot of bitching and complaining with this one.

I'll be honest, sometimes these comedy/drama/thriller/whatever hybrids can work. Some of my personal favorite films are of this caliber. But you gotta know what the audience is willing to stomach if you're going to try and mix genre's up and offer something unique. This, unfortunately, is a huge failed attempt. Considering it's reputation and even slight cult status, I was expecting something funny and quirky in the vein of saaaaaay....The Coen Brothers. That's not a longshot really. I mean, every bit of marketing for this suggests that this is going to be a cute/funny/quirky comedy or at least have some of those elements at play in an otherwise offbeat film that can be hard to categorize. Right off the top of my head, if I had to guess I would say I was expecting something like Once Bitten with maybe a dash of Raising Arizona, the Coen Brother's film Cage also starred in just the year before, which will bring me to something I will touch up on in a bit. But nope. What this is is a huge misfire in every sense of the word.

What you expect to see, as I said, is a quirky/offbeat, maybe even "Dark" comedy. What you get instead is a dull, odd, strange film that offers "nothing" in the way of entertainment, other than to see Nicolas Cage act batshit crazy like you've never seen him before, complete with a ridiculous accent of some sort that comes and goes throughout the film. At times speaking normal, at other times speaking with a weird surfer accent, and then at other times attempting to sound intellectual and distinguished with a "high society" accent that only really comes off as hilarious because it's so bad, you are just left dumbfounded and you think "this is the same Nicolas Cage from Moonstruck and Raising Arizona?". It is and you would never believe it. He's just awful in this.

But you know what? He is the most interesting thing about this film, mainly because it's a bore and a confusing mess of a film. Not funny, not interesting, not entertaining in any way, until you see Cage do something weird and crazy because he thinks he's turning into a vampire after a lustful night with a "supposed" vampiress. You never really know and that's one of the most annoying things about this. You don't know if this shit is really happening or if he's just going crazy. It's said some of his characteristics are nods to other famous movie vampires, but with the exception of trying to walk around like Nosferatu (okay, maybe even then too), you just shake your head and wonder what the fuck is he doing? And just when you think you've tried to convince yourself that maybe this was supposed to be a comedy that just didn't work, something hardcore happens (like Cage's character raping a woman) out of left field that leave you even more confused than ever.

Director Robert Bierman is a television director. This is the only feature film he's ever made and boy does it show in spades. Let's just be thankful he never tried it again and stuck with TV work. And Nicolas Cage can take pride in the fact that though this odd film sucks, he delivered one of his most odd and wackiest performances out of his long career.

I get the concept of a "Dark Comedy", which is what I think they were going for with this one. This is not a Dark Comedy. I don't know what this is. Okay, I'm done bitching. Time to move on.