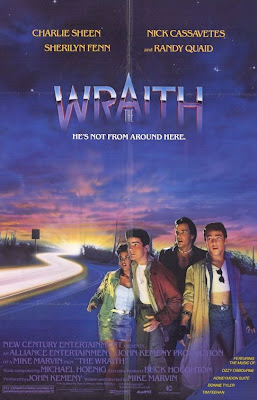 It's hard to categorize this as any of those really because it's not really any of those one kinds of films. It's more of a mish mash of different genre's that only work as well as this does because of the competence of director Mike Marvin and the pretty killer cast he's assembled here circa 1986. Had it had any "nobody" in this instead then we would have forgotten about this 80's gem long ago.

I remember seeing this film regularly in the 80's, I just don't remember if it's because it was playing often on HBO or Cinemax or because I had recorded it off of one of those channels and watched it repeatedly. But what I do remember was that it starred Charlie Sheen (remember somewhere in the 90's when he wanted to be professionally known as Charles?) and was about a phantom dude driving a badass futuristic car seeking revenge, which pretty much does sum up the film in general. But what surprised me after not having literally seen it since the 80's (almost 30 years ago!!) is that it holds up quite well and though not really definable by any one singular genre, packs enough entertainment from several that it ultimately delivers a good time. Do you have to love car chases and car crashes to enjoy this film? Certainly not, but it helps if you do because there are a lot of them in here.

Though there's nothing really spectacular that ever happens, except for a constant barrage of car chases and crashes, they are handled nicely with a deft touch by director Mike Marvin. Again, nothing fancy or anything, but it's competent and with small films like this, we are lucky when they come out as well as they do here. But what makes this slightly better than most low budget chase films is that car. When that car enters the picture it's just a beauty to behold. 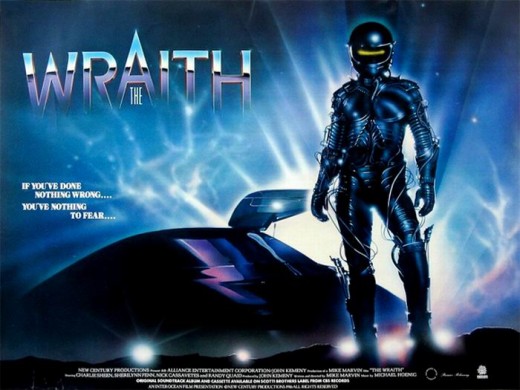 While not really setting any kind of new ground here, another aspect that makes this film work so well is it's fresh young cast. I know I sound old when I say that, but it's true and extremely relevant. Here we have a young pre-Platoon and Wallstreet Charlie Sheen (man, this guy was prolific during this time churning out 4-5 films a year) as the mystery boy who rolls into town just when the wraith happens to also suddenly appear killing off a group of trouble makers one by one. In the hot young chick role we have a pre-Twin Peaks Sherilyn Fenn, complete with unnecessary boob action (unnecessary as in it's totally "not" integral to the story but THANK YOU anyway), a young pre-bald and pre-directing Nick Cassavetes, a badass Randy Quaid as a tough sheriff and a young crazy looking Clint Howard as a nerd. All in all, a fun well rounded cast of "then" newbies.

Despite it's budget, you'll notice almost immediately that this film doesn't "look" cheap. This might be director Mike Marvin's biggest claim to fame as I've never heard of any of the other films he's ever made, and that's okay. I mean, come on; If you only ever ended up making a bunch of crappy forgetful films and were still able to make something as decent as The Wraith, then you did something right. No? He stopped directing films with 2001's Sunstorm, but had worked as an executive producer up until 2011. Not that you care about that technical shit; just sayin' the guy was still in the business up until just a few years ago.

I think I'll end this post with a complaint, just so it doesn't sound like I'm crushing on this thing. That US poster. Who the fuck is that guy on the right? There's Fenn, Sheen and Cassavetes, but who the hell is that dude? He certainly wasn't in the movie. Did they feel the need to have someone dress like a douche-bag with the cut-off shirt to remind us how awful we used to dress almost 30 years ago? I don't need a reminder, I have my old school pictures for that. But seriously, why not have Quaid's asshole sheriff or Clint Howards nerdy mechanic in place of whoever the fuck that's supposed to be? I was gonna include a trailer for this, but I'm not even sure if anybody even bothers to watch them. Some feedback would be nice. Do any of you ever bother to watch the trailers I include with some of these films? I mean, you could always certainly just get on YouTube to see any trailers for any of these films I post, but I do it for the convenience more than anything. Am I wasting my time or does anybody actually watch those damn things anymore?
Posted by robotGEEK at 11:08 PM