Quick Shot: Juan of the Dead 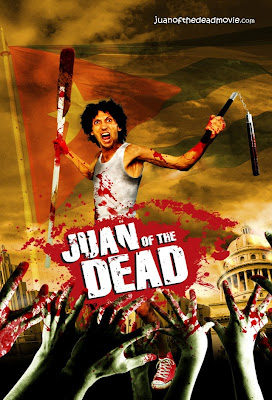 I had actually forgotten about this one because I saw it so long ago and it was during a time when I wasn't doing much action here on the blog. Actually, none at all to be quite honest. A period in time I like to refer to as "when robotGEEK'S Cult Cinema went dark". It's also a film I've been reading about on fanboy and filmgeek sites for the last few years; all positive I may add. But unfortunately, it wasn't available here in the states until recently, as is usually the case. So here weeee goooo...

I must say, Juan of the Dead was a very pleasant surprise. If I had to compare it to anything, it would be Shaun of the Dead, and just looking at the poster art, I doubt that would surprise anyone. But you know what? There really aren't enough of these types of films out there anyway. And when they try, they almost always fail miserably. But here is another prime example of horror/comedy done right. It possesses the same kind of humor and horror elements as Shaun of the Dead, hell even getting down right creative a lot of the time; there's a scene involving a pick up truck and a shitload of decapitations that was pretty impressive. And it plays to it's strengths, which a lot of these types of films don't ever do. This film knows it's budget limitations, and never really tries to go bigger than it should or needs to be, which almost always sinks a halfway decent low budget film.

As much as I did enjoy this film, Juan of the Dead is also kind of frustrating. While it can be extremely inventive and heavy handed in terms of looking like a polished film with a good budget with some pretty impressive visuals, effects and sequences scattered throughout, at times it also looks less impressive, like someone making their very first film. I don't want to beat up the director because the film "mostly" works and looks great, it's just those other moments I find frustrating where it can look and feel cheap. But I'd say about 80% of the film looks good and works fine. It's just those few moments that kind of throw you off. But if you ignore the technical aspect of this and focus on the story, which is pretty great (funny when it needs to be, serious when it needs to be, thrilling and intense at others), it's a valiant effort for sure and a lot of fun. Much more fun than I was expecting it to be and every actor was outstanding, especially the lead who plays the titular Juan. Though he looks wimpish, he's definitely got a strong presence.

So yea, it doesn't quite reach that level of awesome that Shaun of the Dead was able to achieve, but sometimes that's alright. A valiant effort indeed.
Posted by robotGEEK at 1:38 PM