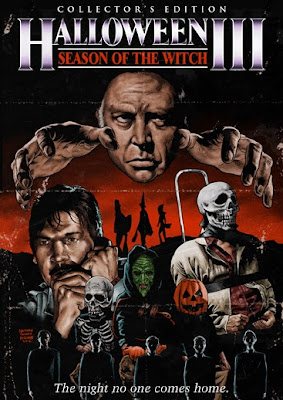 
"The night no one comes home."

When Scream Factory recently released this loaded Collector's Edition of the infamous Halloween III: Season of the Witch, I figured it was the little push I needed to sit my ass down and finally watch this bastard child of the Halloween franchise. All I ever really knew about this was that it basically had nothing to do with the Halloween films or with Michael Myers to be exact. But I have to believe that Scream Factory knows what they're doing because I've loved almost every single release they've done so far. So if they felt the need to get the rights to release this sucker and put it under their banner, then there "must" be something to it, right?

Let me start off by saying this was an impulse buy. I mean look at that cover, just awesome. But this also comes with a 30 minute comprehensive documentary surrounding "everything" Halloween III, so that was the clencher for me. I actually saw the documentary in the Special Features before I sat down to watch the film, which I probably shouldn't have done, but I had no idea what I had in store for me having never even seen a trailer of this, so I threw caution to the wind and dove right in with the doc and in hindsight, I should have seen the film first.


Okay, so let's get started.
I think this is a great little horror film that perfectly encapsules the look and feel of old school horror films, particularly films from the 80's. In fact, it "looks" and "feels" like a John Carpenter film, even though he's only credited as Producer and is responsible for only one of several drafts this films went under. Having seen it and loving it, I can see why a "lot" of people hate it though. If they didn't explain to the public beforehand (which I don't think they did) that this wasn't in any way about the exploits of Michael Myers, and you pay good money to go see this in the theater and it turns out to be another film entirely, then I'd probably be upset too. However, I do think it's a great idea. Beginning with this film, they had wanted to move into an anthology type of series with each subsequent film in some way having something to do with the word Halloween in general but each film being completely different from the other and not having anything to do with Michael Myers. Again, I think that's a great idea as a film franchise and this film in particular is a great way to have started that whole thing, if only it hadn't been called Halloween III. Seriously, take away the "Halloween" title and this is a cool little film. Sure there's no maniac or psychotic walking around killing people as in your typical 80's slasher film, but I had a great time with this one regardless. 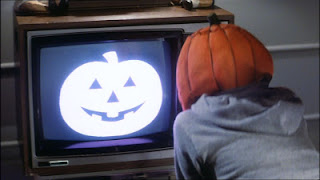 Right off the bat Carpenter knew he didn't want another Michael Myers film and tried to do something different. A few other drafts by various others and a change in directors from Joe Dante (Gremlins, The Howling) to frequent Carpenter collaborator Tommy Lee Wallace (Fright Night Part 2, It) and you have this interesting and unique entry into the Halloween franchise. Again, they just should have gone out and made a film under a different title. Buuuuut, I can see the appeal with an already established franchise like Halloween where just by using that name alone will get people into the theater and hoping they'll like your film enough that they'll get over the fact that they were possibly misled into thinking this would be another Michael Myers film. But again, I can't remember back that far as I was only 6 and can't say what the word was out in the street before this hit the theater. But just based on the trailer alone, I would have assumed this wasn't about Michael Myers. But it still had the Halloween banner though, sooooooooo that alone probably would've gotten my hopes up. But that's just me.

As you all know I hate to do a synopsis, but here's a quick one anyway:
Instead of this being a film about Myers, it's instead about a doctor from the local hospital who's just witnessed a murder-suicide and teams up with one of the victims daughter to uncover a plot by a deranged toymaker who will use ancient witchcraft rituals and specially made Halloween masks to kill millions of children on Halloween night. 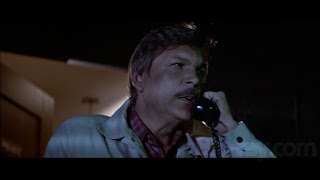 Honestly, Season of the Witch should have been the title of this film, without the Halloween. Even then, you wonder through most of the film what the hell Season of the Witch even means or what it refers to. It's not until the very end that it's made semi-clear. But let's take away the franchise name and talk about just this film. Speaking personally, I love it. It's a much slower film than you'd expect, with not a lot of kills or violence. But when there is violence, it's very well done. Plus you've got the great Tom Atkins front and center as the doctor hellbent on uncovering the sinister evil doings of Silver Shamrock Novelties and it's owner Conal Cochran played awesomely by Dan O'Herlihy. Another aspect I love about Halloween III is Tommy Lee Wallace as director. I've always admired his work, with Fright Night Part 2 being one of my favorite horror films. Hell, even Stephen King's It scared the shit out of me when it first aired on television in 1990. Wallace has a very streamlined aesthetic when he's in the directors chair, and I find this film as well as Fright Night 2 showcase his best work; very Carpenter-esque. So even if it moves along at a snails pace sometimes, it's beautiful to look at with a trademark Carpenter score. But this film divides so many film lovers. For example, my brother was over at my place recently and saw this Blu ray sitting on my television. Now you have to understand, he's a die hard horror fan and always has been. We bother were all our lives and especially as kids growing up in the 80's, the BEST time to grow up being a horror film lover. He saw this Blu ray sitting on my TV and says "Ugh, I hate this movie. It sucks!". To which I reply "Why?". He simply stated "Nothing ever happens. It's so boring". And I can understand that. It's slow and not a lot happens. It ultimately plays out more like a suspense/thriller than anything, with cheesy sound effects utilized to the umpth degree to build tension or make you jump during a crucial moment that would otherwise have zero impact had it not been for said sound effects. But you know what? It all works for me. I dig it. It's the type of slow-burn kind of film I crave from time to time in the horror genre, much like The Fog, another Carpenter film. Coincidentally, legendary cinematographer Dean Cundey worked on this film as well, which is why I think it looks as gorgeous as it does. Sure you could rip this film apart, even I could. Why is Cochran trying to kill millions of children and turn them into robots? No idea. What the hell kind of doctor can't stop drinking and is able to just take off on this adventure with a hot young woman leaving behind his kids? These are just a few you might be asking yourself. You just have to go along for the ride and turn off your brain and enjoy the film, as I did.

Well as you all know, the public "did not" like it, and it took 6 years before producers attempted another Halloween film with 1988's fittingly titled Halloween 4: The Return of Michael Myers, going back to the Michael Myers signature formula, a film I found as a decent addition to the franchise, but not without it's problems.

If you've seen this before, but haven't for a while, I suggest a new viewing. I think you'll have a whole new appreciation for this film. It has a very Wicker Man and Invasion of the Body Snatchers feel to it all. If you've never seen it, I suggest you check out this new transfer from Scream Factory with either their Blu ray or DVD release. It's amazing. But here's the best part. The included documentary Stand Alone: The Making of Halloween III: Season of the Witch is worth the purchase alone. This 30 minute comprehensive, informative Special Feature delves into "everything" about this film with new interviews with all parties involved including Tom Atkins and Tommy Lee Wallace. It's just fucking awesome and I find myself watching this doc more than the actual film. If you're like me and live for this shit, it just doesn't get any better than that. A great misunderstood film, plus an all new in depth documentary, plus a shitload of original theatrical trailers and tv spots. What are you waiting for?

Posted by robotGEEK at 9:11 AM