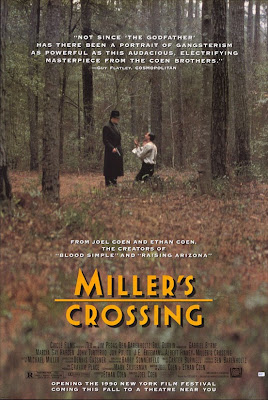 Man, I saw this one a few weeks back and have been wanting to put some thoughts down ever since, but I keep debating whether to go into depth about what makes this amazing film so great (knowing I could potentially bore you to death), or just do one of my "Quick Shot" reviews and just hit a few power points and let you experience it for yourself. The power point idea won out.

Wow. Just....wow. That was my exact reaction when this was over. I sat there and thought "How is this not considered one of the best gangster films ever made?". I mean, you just don't hear anyone refer to this one when discussing the great gangster films of the last 30 years, yet they should be because I was just blown away by this.

I do remember seeing this when it first came out back in 1990, but being as young as I was, I doubt I could appreciate it the way I do now. Well, obviously since I don't remember much about it save for a few really cool shots courtesy of director Joel Coen that always stuck with me. Being a fan of "almost" all of their work, I've found that cinematically and visually, I like the films that were just directed by Joel Coen more than the ones that were co-directed by him and his brother Ethan. Of course, some may not agree, but for me they were much more visually interesting, quirky and inventive and Miller's Crossing is no exception. I don't think Ethan started taking a co-directors credit until 2004's Ladykillers, and he very well could have been co-directing all of their films up until that point for all I know, but I've just always felt the Coen's films had a distinct style and luster that I prefer before they started sharing credit.

Right away you'll notice it immediately has the Barton Fink style; dark and brooding with a washed out color pallet. At times you can feel a sense of restraint from Coen. Like he doesn't want to go overboard with some crazy camerawork because after all, it's a serious gangster flick. But then out of nowhere he hits you with some crazy awesome sequences that remind you that you are in fact watching a film directed by Joel Coen. I truly feel he's one of the most gifted directors working today and for the last 30 years.

Sandwiched between 1987's Raising Arizona and 1991's Barton Fink, Miller's Crossing is a film completely different from the zany worlds created in those other films. A serious, dark and violent tale about an advisor (Gabriel Byrne) to an Irish mob boss (Albert Finney) who seems to be playing both sides of a war between two mod bosses in 1930's prohibition era to his advantage while simultaneously dealing with his own set of problems.

Though it could be a tad confusing at times, at least for the first half, trying to remember an insane amount of names and who's who, this was such an engrossing and thoroughly riveting and entertaining gangster film. The film looks simply amazing, and all the actors bring their A game to the table, especially Byrne as the advisor with a huge set of balls and Albert Finney as his tough as nails boss who doesn't really seem to be afraid of anything. You really both love and hate this guy at times, and that's all due to Finney's portrayal of a man who wears his heart on his sleeve, yet isn't afraid to get his hands bloody and dirty.

The Coen's razor sharp dialogue in the film are what really keep things moving along when there isn't an awesome bit of suspense or action going on. It's fast and furious with lingo not too common these days so I'd recommend watching it with subtitles. It helps.

Overall, an incredibly solid and stylish gangster film. After having seen it on Netflix, I'm going to purchase this immediately. It's just that great and such a beautiful film to look at in widescreen. And I was surprised at how much I loved this. As much as I love a lot of their films, there are also a lot that I just don't like to be completely honest. So they've remained a hit or miss kind of duo for me, but when they get it right, they can turn out some truly memorable films. I don't normally "rate" films in general, but if I did, I'd give this one a solid 8 or 9.
Posted by robotGEEK at 1:48 PM