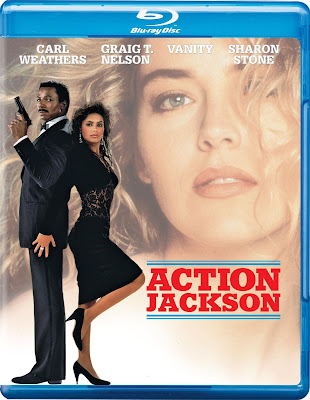 So I have no idea how this little bit of amazing news passed me by without me knowing. I mean, I just can't understand how I had no idea that Action Jackson, one of the BEST straight up action films to come out of the 80's, and just a badass throwback to blaxpoitation films of the 70's, was getting the Blu ray treatment and I had no idea? I've only been bitching and complaining for years that this film has never gotten the respectable release it deserves. Hell, I even included it in a post I did about a year ago about films I felt needed a Blu ray release. Yes we have an official DVD release from ions ago, but it's a bare bones disc with no features and worst of all, it's in Full Frame! Hell, even the trailer below is in Full Frame. So with the exception of the one time I luckily caught this streaming on Netflix in widescreen, this film has NEVER been available in its proper aspect ration, which has always bothered me because the film looks pretty damn amazing and deserves to be seen in true widescreen.


Well, here it is. Finally. And apparently this was released on Aug. 6, without so much as a blurb to be found anywhere, except for Aintitcool. I think I'm still in shock really. One, because it's actually and finally available in widescreen, and two, because I had no idea this release was even ever on the horizon. But hey, I should really stop bitching and just be happy that it's finally here.

So from what I can tell, there are no special features. Fuck! Not even a trailer? But we do have the one and only Action Jackson in widescreen, and for me, at this moment, that's enough. Hey, for just a little over $10, how you can you resist? Needless to say this was an immediate impulse buy, as it should be for you as well. You could also say this falls under the "So Bad it's Good" category because this thing is just plain ridiculous. I mean, just look at the trailer. But it's oh so much fun.

This really is just one of the best action films ever made. It gets so much right that many action films get wrong, regardless of what time period it was made. This is old school style action from action producer Joel Silver (in his prime) and directed by action choreographer and stunt coordinator legend Craig R. Baxley, a man who kicked our asses with the "Triple Threat" Action Jackson, I Come in Peace AKA Dark Angel and Stone Cold, before sticking with television work. What a shame. The guy knows how to direct action films using old school practical stuntwork. So yea, do your part and support this film buy spending a very small amount of cash for a piece of 100% certified Badass Cinema. Buy this. You will thank me.

You can purchase this over at Amazon.
And you can check out my review from years ago HERE.