Quick Shot: The Last Will and Testament of Rosalind Leigh 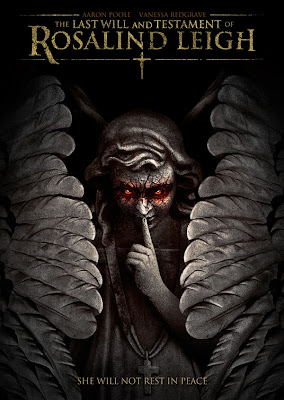 So you're probably wondering, "What the hell is this?". I'll be honest, I'd never heard of it either, and would randomly come across this on Netflix as I was browsing. I still check out my local video stores selection as well from time to time, and never saw this there either. And I know, that cover does nothing for you. I'm in the same boat man. Come on, it just looks like another low budget DTV horror flick. What can you gauge by that cover art? Nothing really. But guess what? It's actually pretty damn good.

My girlfriend put this one on the other day because she had heard about it in a couple of other sites. Basically saying it's a good DTV horror flick. And while I sat down to watch it I noticed immediately this has a much better quality than you'd expect it to have. Tight fluid camerawork with a sense of style (for reals), a constant spooky factor and solid performances immediately make this one a standout. But here's the funny thing. There's hardly any dialogue or even any actors other than the lead for about 90% of the film. It's a very simple yet effective little film that looks good.

Basic story is that this guy goes to this big old house that he grew up in after his mother passes away. He's there to collect everything and figure out what to do with it all. Immediately he starts seeing and hearing some strange things, even having hallucinations along the way, and he soon discovers this house is haunted by some presence. His deceased mother? He's not sure; but something. What he discovers painfully takes him all the way back to his childhood to overcome some demons of his own.

I thought it was pretty cool and flat out gutsy to have most of the film without dialogue. Some may not notice, but I did. Most of the film deals with him being alone in the house investigating the sounds and the creepy things hiding in the dark. So since he's almost always alone, he doesn't talk. Makes sense doesn't it? And though the main guy (Aaron Poole) ain't nothing to write home about, he was good and held his own considering the film is basically a solo act, which is all you can really ask for in these low budget films. But I'll give the guy some props though, he was good. The guy doesn't know how to dress for shit, but I'll blame that on the costume department. He just needs to do something about that ridiculous hair. Seriously. He also reminds me of an older chubbier version of Aaron Paul from Breaking Bad.

Here's a fun fact. The films writer/director is Rodrigo Gudino, founding editor and president of Rue Morgue Magazine; a great horror magazine. Though he's made a few well received shorts, this is his first feature film. So I'll give credit where credit is due; this guy's got a great eye and though a lot impressed me about this film, it's the visuals that hooked me in. He keeps the film at a constant steady pace, the effects to a minimum and the tone dark, gothic and gloomy. All the necessary ingredients for a good haunted house flick. He's got a talent for camerawork. I liked that he didn't revert to the shaky-cam method at all. It's all fluid and steady with a lot of good tracking shots that work exceptionally well. Good job my man. I'm excited to see what he comes up with next and where he goes in his filmmaking career.

Good flick overall. I'm not saying to run out and grab it or anything, but if you find yourself browsing Netflix and can't find anything to watch and could use a decent haunted house flick, this will certainly fill the bill.

Posted by robotGEEK at 2:50 PM