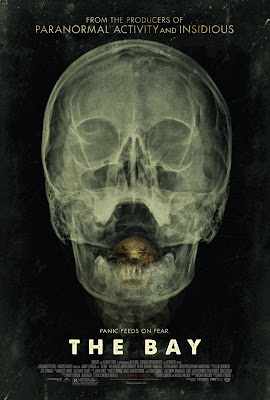 Generally, I'm not a fan of "found footage" films. Mostly because they way they choose to film them make me physically ill. And that's not me using a dramatic metaphor. I actually get nauseous watching those things. Hell, I can't even play first person shooter games anymore. So I've stayed away from most of these types of films, of which there are a lot as it's one of the new "types" of films new talentless filmmakers can easily get into. I'm getting the feeling that the "home invasion" sub-genre will be the next. I hate to sound so harsh, but it's true. Don't have any real talent behind the camera but want to make a horror film? Make it a "found footage" horror film and it'll mask the fact that you can't film for shit.

But I'm getting off track here. What peaked my interest with this particular film was the fact that Oscar winning director Barry Lenvinson (Diner, Rain Man, Good Morning, Vietnam, Bugsy) was actually doing this one. Weird right?? Well, if we're being brutally honest, the guy hasn't made a memorable film since the late 80's. But he could still have some juice left in him. Or so I had hoped.

What sets The Bay apart from a lot of other found footage films is that instead of using footage taken from a single camera or camcorder, he instead utilizes news reports, camcorders, surveillance footage and everything else he could cull together to tell the story. And don't worry, I'm not going to bother telling you what it's about because too much of the experience is taken away if I were to even give you "some" of the story. It's currently streaming on Netflix, so give it a watch while you still can. But getting back to the technique he used, I actually found it much more.........interesting. And I could stomach it. There's no idiot running around with a camera in circles or making you feel like you're on a carnival ride. So that's something right there. And the way he puts everything together using all these different elements actually works and seems plausible. I don't know, for me anyway.

Not to say that this is a slam dunk, because it's not. While the story itself was interesting as well as the effects work and unique perspective, it just kind of left me wanting more when it was over. Like it felt like there was a whole third act missing. Things finally get going and the suspense and tension are building up nicely, albeit slowly, and you think it's going to have a grande finale to finish things off, but right when you're expecting that to happen it's over and you're left thinking "It's over?". At least for me and my girlfriend. We were just kind of left feeling that it was "okay". Definitely not the worst found footage film out there, but certainly not one of the most entertaining. And that right there is a shame because it very well could have been in my humble opinion. Being a found footage film, you're not going to see any recognizable actors in this, but the actors that are here definitely bring their A-game to the film and that works tremendously at selling this concept. So kudos to them for not sucking. And I just found the lead actress, Kether Donohue, who plays the news field reporter so damn cute.

Ultimately this won't win over any new fans to the found footage genre. It's a valiant effort by a respectable A List Hollywood filmmaker, but that "left hanging" feeling at the end just kind of killed what could have been one of the better found footage films out there.
Posted by robotGEEK at 6:54 AM