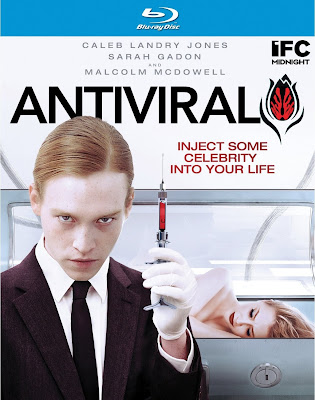 I have been reading up on this film on many horror sites and news articles for a little while now. More so after it premiered at The Toronto International Film Festival. Some have given it much praise, stating it's a strong debut feature from Brandon Cronenberg, the son of legendary cult film director David Cronenberg. But there's been lots of hype around this for sure if you keep up with this kind of stuff. So does it live up to the hype?

Weeell, while it is impressive on a technical level, it doesn't quite reach the height of greatness that you kind of hope for, or that you expect from a Cronenberg offspring.

Basically, the film looks great about 70% of the time with some real nice time-consuming and intricate shots. But unfortunately, that's not 100% of the time, because I also found him often going to some lazy handheld camerawork that kind of throws off the whole vibe he had built up with some truly stunning and original visuals. You "kind of" get the same feeling you got the first time you saw Duncan Jones debut feature Moon, but it doesn't quite reach that level of awesome or awe, which is truly a shame because it's really just "almost" there many, many, many times.

If you read any of my reviews in the last year or so, you'll notice I refrain from the "synopsis". I don't know, we get what the film is about mostly from trailers, articles or reviews and for me personally, I don't really like having the entire film laid out for me before I even see it by reading a review that gives you a play by play of the whole film. Rather, when I read someone's take on a film, as I often do with some of these other fine movie blogs like Hellford 667, Collected Cinema, Comeupennace Reviews, Direct to Video Connoisseur, The Film Connoisseur and The Video Vacuum to name a few, I really am only interested in their ultimate feelings and reaction to the film; what they liked and didn't like about it, which they do marvelously. So be sure to visit their review sites as well if you have not yet already.

So much of the time a review on a respectable site or newspaper will just give you too much and I'm not really interested in what the film is about or what it all means. I'd like to experience that for myself as much as possible. For example, there is a famous review site I visit regularly, but I've found his personal reviews of films increasingly more and more frustrating as he gives a play by play of every single little detail and well, you've just basically seen the entire film, spoilers and all. It seriously drives me nuts. Half the time I just stop reading because he's already spoiled most of the film for me. So I've pretty much done away with giving any kind of synopsis for any review I do be it a long or short one just for that reason alone. Plus, I think I'm just also lazy that way.

But I think Antiviral deserves at least a partial synopsis because the trailer is incredibly misleading, which is where some of my problems with this film come in to play. So here's my attempt at one:

Syd March (Caleb Landry Jones) works in a clinic that specializes in infections. Specifically, infections that are retrieved from celebrities. Apparently, in this time, the "in" thing or the new trend is to be purposely infected with whatever disease or virus that a celebrity has had as a way of becoming closer to that particular person. It's quite a big business, generating tons of money and totally legal, as long as it's not a "life ending" virus. Syd is sent to retrieve the virus that has apparently stricken current big time celebrity Hannah Geist. But before he turns it over to the clinic he works for, he decides to inject some of it into himself, not fully knowing what particular virus she may actually have. You see, Syd has a side deal going on where he sells these viruses after infecting himself with them and harvesting them to sell on the black market. Soon Syd realizes it's something more serious than he could have imagined and now he must find out exactly what virus this is that's slowly deteriorating his body before it's too late.

I did it! Whew! But I really dislike it. But the problem I have, and the reason I feel the need to elaborate on the story, is because the trailer, as awesome and haunting as it is, is so misleading and when the film was over, I was sorely disappointed that it didn't end up being the type of film the trailer leads you to believe. SPOILER ALERT! (you've been warned)
First off, yea you get the basic premise as I've just explained, but in the trailer they make it seem like because of this unknown and potentially deadly virus, Syd's body begins to morph and change into something .......well you don't really know. It just looks cool and disturbing as fuck, which was pretty much the biggest appeal to me. But guess what? That's not what we get. Yea, those badass scenes that seem to show Syd's body changing do appear in the film, but they are hallucinations. Damnit! For me, if "that's" what the film would have been about I would have been 100% on board with this. And the possibilities!! Kind of like Brandon's father's 80's classic The Fly, except more subtle, which can sometimes be more frightening if done correctly. THAT is the film I thought I was going to see and unfortunately, that's not what you get. What you get instead is a very slow-burn kind of film that plays out more like a mystery with some really nice and stunning visuals most of the time, but never achieving the level of awesome the trailer promises.

I've seen this guy Caleb Landry Jones in a few things; The Last Exorcism and X-Men: First Class to name a few. And here he does a decent job carrying the film squarely on his shoulders. He certainly looks the part, but my biggest beef with him is that he mumbles so damn much and barely ever enunciates that I honestly couldn't understand half the words that came out of his mouth. You'd probably have to watch this with subtitles. My viewing partner and I kept asking each other "What did he just say?".

Sooooo, not the breakout film I was hoping it'd be like Duncan Jones' Moon. To me, it felt more like another recent "debut" film, Panos Cosmatos' Beyond the Black Rainbow. Sure that film didn't make a lick of sense, but it was a hauntingly stunning piece of visual eye candy. Antiviral "almost" gets there, but not quite, which is incredibly frustrating because you know it can. I feel most will find this one dull, only keeping you invested or interested for the remainder of the time because you keep hoping the third act will blow your mind. Bad news. It doesn't.

Posted by robotGEEK at 7:24 PM