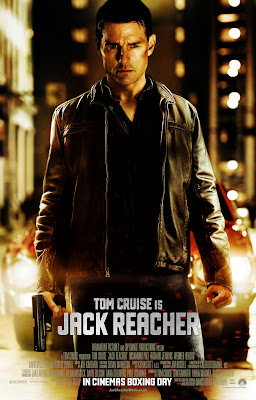 I've been wanting to throw out a few words regarding this particular film ever since I saw it on DVD about a month ago. Only because after having seen it now, I don't feel it got the recognition it deserved as a film in the Badass Cinema category. I've heard some complain it's too slow. I've heard fans of the book not feeling it justified the source material. I never read the books, so I can't say. But it's a badass film all on it's own. Is it all kinds of crazy action and excitement where you're yelling "Oh!" or "Ah!" to your TV screen? No. But it's a superbly crafted thriller with some pretty badass action, fight and car chase sequences thrown at you with an experts touch.

Christopher McQuarrie has written all kinds of films. Some good, some not so good. His biggest claim to fame was writing The Usual Suspects, which he won an Oscar for. On the flip side, he also wrote The Tourist and Jack the Giant Slayer, so you just never know. But he has only ever directed one other film besides this, and that was Way of the Gun in 2000. But after seeing Jack Reacher, you'd never know it. The guy must have done some serious film school studying because this film is about as tight and gripping as it can get for this genre of film and each scene is so meticulously thought out and filmed that I just couldn't get over how "precise" everything was. Like, not a single frame was left to chance. And that car chase. Holy shit! I'm sure there was a decent amount of green screen or digital effects work done in that sequence, but you'd never know it and you'll never notice. That's how seamless it all looks. So natural. It's no wonder McQuarrie has already been tapped to do the next Mission Impossible film. See Jack Reacher and you'll know why.

So yea, it's a solid thriller with enough suspense, twists and action to keep you entertained. And throw in Tom Cruise firing on all cylinders and even Werner Herzog in a rare acting role as a villain and it's a solid win for me. Maybe I've already said this and maybe I haven't, but I just respect the hell out of Cruise. He doesn't always throw out a winner, but the man is consistent and probably the hardest working actor today. He 's not the top box office draw he was a while back, but the man keeps trying and no matter what role or film he's doing, he give it 110%.

I had a small gripe or two, but nothing worth mentioning really. If you haven't had a chance to see this yet, I urge you to, it's pretty great. As much as I love horror or balls to the walls action, I often find myself in the mood for a really good thriller and this one certainly delivered the goods on all fronts. And there's some more good news. They had hoped this would be a start to another franchise for Cruise. Well apparently this did well enough here in the states and overseas combined to justify a sequel so lucky for us, we're getting another one.
Posted by robotGEEK at 6:12 AM