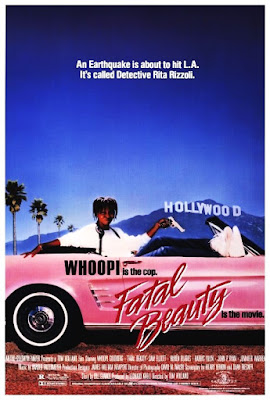 Recently I've begun a new form of film-watching. I hit my local thrift store, and puruse they're plentiful selection of VHS tapes. Some days these are only 50 cents, while others they're $1 each. Still, $1 is chump change when it comes to the enjoyment of a film, so I don't mind. I purposely pick up random titles of films that were made in the 80's, more often than not "thrillers", and blindly grab them if I've never seen it. I've found this to be a very rewarding experience, because these would not be films I would normally look for, rent, or add to my Netflix List. But for $1, I figure "What the hell? It's only a $1". And what ultimately ends up happening is that these are the films that end up completely taking me by surprise by how great they are. This happened most recently with Shoot to Kill and Band of the Hand, 2 films I am just completely in love with now.

Fatal Beauty is the perfect example of why I love films. Of going into them with a preconceived notion as to what type of film it might be, only to be surprised by it being a completely different one altogether. I'll be honest, the only reason I finally gave this a watch was because it was the film Tom Holland directed after his breakout debut with Fright Night. I didn't know that until now, and I was floored by the idea that he would choose this as his next project when he had just delivered a successful hit in the form of a vampire horror film just 2 years earlier. Knowing that his next film after this was Child's Play, another horror hit for a major studio, I was even more fascinated by the idea that he would instead choose a Beverly Hills Cop style cop/action/comedy sandwiched between 2 horror hits. When I came across this VHS tape at my local thrift shop, I jumped on it.

Much like myself, maybe you went into this thinking it was an action comedy, with Whoopi Goldberg displaying her knack for being a smartass. What I wasn't prepared for was how this film ended up being something different. In reality, Fatal Beauty is more of a gritty, violent cop thriller, with an occassional funny line thrown in. But really, I didn't find the humor to be more prominent, which was surprising, and ultimately this ended up being a pretty great 80's cop thriller that offers up ample amounts of violence, bad language, grittiness, and a hard-edged vibe that hits you right from the opening frame and doesn't let up until it's violent conclusion. For me, these were all pluses. I love being thrown a curve, in a good way. I love when I go in expecting something, and then having that idea take a complete 180. 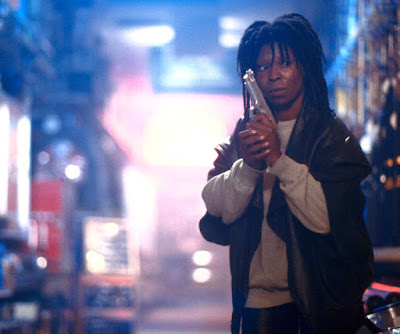 I can only surmise that they were riding the Beverly Hills Cop wave, which coincidentally saw the release of it's sequel Beverly Hills Cop 2 (the most successful in the franchise) this very same year. It was also a good year for violent action films with the likes of Lethal Weapon, Predator, Robocop and The Living Daylights all hitting theaters this same year. 1987 was a good year for action to say the least. But still, I would not expect a film called Fatal Beauty, sporting a cover of Whoopi Goldberg smiling while holding a gun, all while sitting in a mustang convertible, with palm trees and the Hollywood sign in the background, to be anything but a funny take on the standard cop film. I mean, how does that yell "violent cop action thriller"? It doesn't. It spells "action buddy/comedy", which this film verily is not. And again, that's a good thing.

I think what trips people up is that on the surface, it's very much like Beverly Hills Cop. In this case, there's a new drug hitting the streets called Fatal Beauty, and narcotics officer Rizzoli (Goldberg) just happens to stumble upon this new trend, with an aim to put the drug dealer Leo Nova (Brad Dourif) out of business for good. Along for the ride is a persistent bodyguard (Sam Elliot) for a local drug dealer she's currently keeping under surveillance. The film is truthfully a bit weird in how it throws certain elements into the mix, like this bodyguard. It never really makes sense why he's always around, other than he's following orders from his boss. Yet he consistently risks his life to save hers at just the right time. He's also unapologetic-ally falling in love with her, which is also questionable since she's nothing but rude, mean and condescending to him. Then there's the whole thing about her having an Italian last name, which she obviously is not. There are so many elements that come into play that don't really make a lot of sense, yet it was the 80's, and details like that weren't all that important. It really just makes it all a bit more quirky than we're used to today. 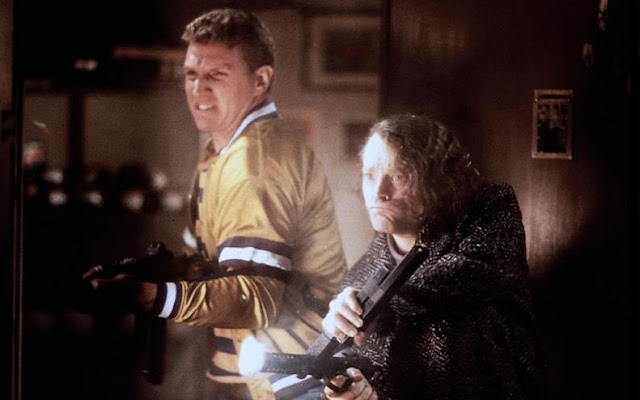 And then there's the title - Fatal Beauty. Obviously right off the bat you assume it's referring to Whoopi Goldberg's character, which in itself is a bit odd. She's not someone you would picture when referring to someone as a fatal beauty. So that may have thrown some people off, when in fact Fatal Beauty refers to the new designer drug hitting the streets, and not the main character in the film. Maybe had the film been called something else, it may have had a better reception? Perhaps.

Another aspect that really kind of threw me for a loop, and which is also another major element to making it one of those "sign of the times" is the use of curse words incessantly. I'm talking like literally every minute. That's just something they don't do anymore, mainly because they want to make them as PG or PG-13 as possible so they can fill more theater seats. It's funny how that wasn't an issue 30 years ago. In the case of Fatal Beauty, the use of the word "Bitch" and "Cunt" is pretty incredible. I think they were trying to go for the same kind of record Scarface achieved years earlier with the use of the work "Fuck". What's interesting is that in this film, calling Rizzoli a bitch is kind of a thing. It's like an instigator for any kind of trouble she gets herself into. They call her a bitch, she tells them how much she hates it, and proceeds to get into a fight or gun battle because of it. Yet there are moments where she's not even in the scene and they refer to her as the bitch or cunt on a regular basis. It's kind of crazy. They definitely didn't think ahead about possibly having this film play on television one day.

Whoopi Goldberg was really trying to find her right fit around this time, or maybe the studios were? She came out swinging with her intense performance in The Color Purple. But immediately followed that up with a series of action/comedy/thrillers such as Jumpin Jack Flash, Fatal Beauty and Burglar, before delving into some more drama. Really though, comedy is where she delivers, and it's what ultimately won her an Oscar. But when you look back at these series of films, it's kind of surreal when you look at the no-nonsense and vigorously unfunny person she is today.

While the cast is pretty great all around, with a ton of notable character actors left and right, it's the casting of Sam Elliot, while a bit out of place here, that kicks this film a few more notches into badass territory. Really, it's a bit odd. He randomly shows up always at just the right moment, and then disappears again for long stretches of time. But when he shows up, he's a badass 100%. He always displays that swagger and Sam Elliot charm, saves the day, gets involved in endless shootouts and gun battles, and tries repeatedly to get into Rizolli's pants. He just rules. 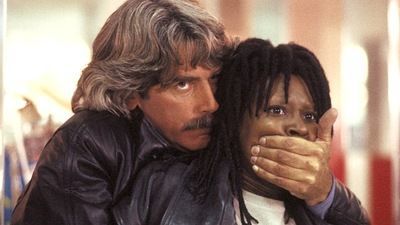 Fatal Beauty was a constant series of surprises for me, mainly in that it's not at all the kind of film I was expecting based on that poster and cover art. I still can't explain why Tom Holland made this between Fright Night and Child's Play, but regardless, he does a bang-up job behind the camera, giving the film a darker and grittier look and vibe that I could ever have expected. He also demonstrates a knack for shooting action, which I wish he would have explored more with subsequent films. If you're never seen this before, and you like 80's action, then definitely give this one a try. It might surprise you.
Posted by robotGEEK at 11:10 AM