Quick Shot Review: The People Under The Stairs 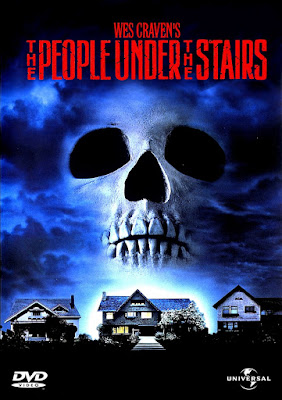 While I currently have a rather large list of reviews I need to catch up on, having just seen this film for the very first time last night (yes, I have no excuse), I felt the urgency to throw down some words on this immediately.

I don't know why I never gave this film a chance, I have no excuse. For some reason it just always passed me by, and I suppose I never really heard any positive word-of-mouth, which would have gotten me to at least consider seeing it. But no, never heard a word, never saw a trailer, never thought "Hey, it's a Wes Craven film. Maybe I should give it a shot". Maybe it was because Shocker still left a bad taste in my mouth? Possibly. But in any case, I never saw it until just last night, and I went in as cold as possible, not knowing a single thing about the story, the setting, or the characters. Here are my thoughts.

Wow! The People Under The Stairs was nothing like what I was expecting, and I don't even know what I was expecting to begin with, but it sure as hell wasn't this. And you know what? I loved every fucking minute of it. This film is so damn bizarre, and so batshit crazy that I constantly kept asking myself "What the hell kind of movie is this?". It's awesome, that's what it is.

It starts off as an urban tale about a kid from the ghetto who decides to help with a robbery that will potentially yield some gold coins that he can use to help pay rent for his family, who will be evicted the following day by the greedy landlords unless they come up with triple rent. It just so happens that the house they intend to rob is also the landlord of their building. Once inside the house, they got more than they bargained for. From this moment on it turns into a house of horrors type film, and gets considerably more and more nuts as the film progresses.

One can only guess what was going through Craven's head when he conceived this story. For me personally, the whole urban angle really through me for a loop. It's not generally the type of setting or setup you usually find within a Craven film, or any horror film in general. Once the story settles in the house, it does resemble more of a Wes Craven film in both terms of aesthetic and tone, but even then, it goes so far off the rails that you kind of just throw your hands up in the air (metaphorically speaking of course), and just enjoy the ride, because personally speaking, it was one helluva ride.

I'm not sure how to even categorize this, because it's certainly not horror, though that was the intention I'm sure. While there are lots of thrilling moments, and a few intense ones, I would hardly call it scary, and it's also just so strange and oftentimes funny, that had I seen this and not known who wrote and directed it, I would never have guessed this was a horror film made by one of the biggest horror masters of our time. It possesses a very unique vibe; one that I have a hard time pinning down.

File this under "Total Surprise". This easily became one of my new favorite Wes Craven films.
Posted by robotGEEK at 1:51 PM