Most of you may not know his name, but you'll most certainly know is work. By profession, Craig R. Baxley began his career as a stunt coordinator and second unit director primarily in television, which transitioned into directing gigs on episodes and TV movies, beginning with The A-Team from 1983-1987. It was around this time that his career peaked, starting with being both stunt coordinator and second-unit director on the Arnie classic Predator in '87. From 1987 on he became a full-time director and retiring from stunt coordinator and second unit work altogether. Craig R. Baxley only directed 3 big budget theatrical films in succession between 1988 and 1991, but it's these 3 films that left a huge and lasting impact in the world of Badass Cinema.

So why is Craig R. Baxley so important? Let's just start with the obvious. In 1988 he directed the ludicrously awesome Action Jackson, followed by the Dolph Lundgren sci-fi/action classic I Come in Peace aka Dark Angel in 1990, and then The Boz biker classic Stone Cold in 1991. Talk about a Triple Threat! Not only is he a competent director, but his background in stunt work clearly gave him a lead over other directors in the same field. With his background, he was able to utilize his experience in incorporating some killer stuntwork in every single one of these 3 films. Sure some of them are silly, like Action Jackson running along side a speeding car and being able to catch up, but that didn't make them any less awesome.

I've always found him to have a deft touch when it came to directing. He doesn't necessarily carry an identifiable style, but does a competent job, especially when it comes to the action and stunt work, and it's in these sequences where Baxley really delivers. It's also where he does in fact leave a specific stamp on the genre. When it comes to the action, he makes sure you can see everything. He was never one of those directors who got too close to the action to where you couldn't make out anything, instead choosing to pull back mostly and let the action speak for itself. Every stunt, every explosion, and every hard-hitting punch lands with such ferocity, mainly due to how he specifically shoots them. One of his trademarks is laying the camera on the ground when someone is falling from a punch, kick or gunshot wound. The camera is placed behind where the head of the victim will eventually fall, giving the fall a much more brutal feel as the camera follows panning down. It's more than likely not something you'd ever notice, but I did, and he uses this technique in all 3 of these films, a technique I have never seen anyone else use. 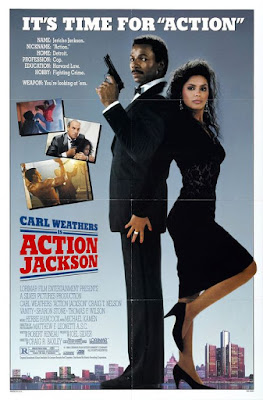 There is so much to love about this film. Essentially it's a sort of throwback to films of the 70's blaxpoitation movement like Superfly, Truck Turner and Shaft. What's surprising is that it works both as a homage to those kinds of films and also as it's own 80's action film, complete with specific music cue's and a down and gritty atmosphere that gives the whole homage vibe some serious credit. But then it's also a badass and very 80's action film that works better than a homage to the 70's films because of it's ability to be gloriously over the top and very much a product of it's time. I had always hoped that this would have ended up a franchise for Carl Weathers. It should have!! If there was ever a film deserving of a franchise, it's this one. It's a crime that never happened.

This is the kind of film that should have been a runaway hit at the box office, yet for reasons beyond my comprehension, was not. I can't explain it, and I've given myself ulcers trying to. It has everything you could ever want in a badass action film and delivers the goods tenfold. And so much of that is attributed to director Baxley, who does an even handed job of shooting both loose freestyle and stylish. It's never too much in either direction, which works just perfectly for the type of film this is.

One of the best things about this film is that it boasts a huge roster of familiar faces from both Predator and Die Hard. If you've seen it, and you love action films, then you know what I'm talking about. You could easily spend half your time picking out these character actors and naming the other films you just saw them in. 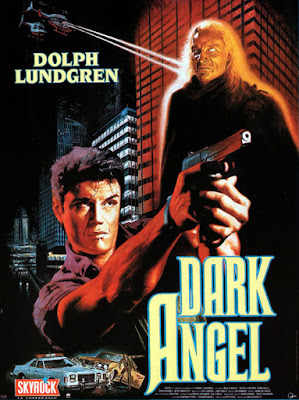 2 years after Action Jackson Baxley teamed up with Dolph Lundgren for this early 90's sci-fi action classic. While not the film as originally intended, what we ultimately did end up getting is quite possibly one of the best examples of this specific genre regardless. Had this been given to any other director, I seriously doubt it would have been nearly as good or as badass.

If there's a film out of these 3 theatrical releases that best shows Baxley's gifts behind the camera as a visualist and his ability to push the envelope in the action and stunts, it's this one. I really cannot recall any other film that had as many explosions as this film did. Much like his previous film only 2 years earlier, this has a very much "of it's time" feel, but to great effect. It looks and feels very 90's, even though it was barely 1990, but that's one of the many things that makes this one so great.

Dolph Lundgren was really hitting his stride by this point, having just appeared in The Punisher and Red Scorpion. But it's really in this film that his acting became stronger, and more importantly, his accent was virtually nonexistent. He had become one of the more popular action stars of his time, and would follow this film up with Showdown in Little Tokyo and Universal Soldier, further cementing his status as an action legend.

Much like Action Jackson, Baxley and his team infuse so much action and stunt work that whether you find the story to be silly, or the characters to be unlikable (that's not the case here, just an example) that there's enough action, explosions, chases, fights and gun battles to keep you entertained if all you're wanting to see is action. All of Baxley's 3 films are great, but this one really stands out for a number of reasons; the insane amount of explosions, Dolph Lundgren!, a killer synth score by Miami Vice theme-song-maker Jan Hammer, a unique concept and even more unique alien in Matthias Hues, and just it's very basic, yet fully engrossing sci-fi elements. 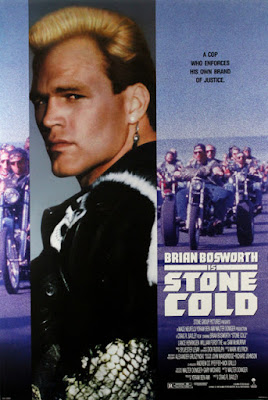 One of the things I like about Baxley is that none of his films are the same. Usually directors tend to stick to a genre, formula, or type that they're comfortable with and more often than not, they end up making the same film over and over again. Thankfully, that's not the case with Craig R. Baxley, who offers something totally different with each one of these films, separating them individually in tone, style, theme and sub-genre, and that couldn't be more true than going from a sci-fi/action film to a biker action film.

Baxley has a penchant for bringing out the best in his leads. He did it with Carl Weathers, then with Dolph Lundgren, and continues with Brian Bosworth, in his big screen debut. Sure, he may not be the strongest actor, but he's not bad either. In fact, there are moments in the film, especially in regards to the character, that The Boz displays an almost natural talent. He never did go on to bigger and better things, but he did make an impression in his one and only theatrical film.

I found Baxley's direction to be a bit more loose and freestyle this time around compared to his previous 2 films. And you know, it works well for the material. It's a fast, loud, gritty, sweaty and violent film that rarely ever slows down, inviting you into the biker gang world and culture in a very down and dirty kind of way. While there is plenty of action, it never gets as big as Baxley's previous 2 films, but that's okay, because this is a totally and tonally different picture altogether. That is until the film hits it's final act, and all hell breaks loose in such a glorious way. If you felt that there was any "big" action or stunts missing from the film, it was saved for the ending, which kicks ass.

Rounding out the cast is resident baddies Lance Henriksen, William Forsythe and Gregory Scott Cummins, who all add that very special 90's touch to this already killer biker action film. Much like his other films, this one also stands out for a number of reasons, one being the better than average cast, but most importantly, because the biker film is an all too rare sub-category in the action genre. There just aren't enough of them, and really, the only ones that come to mind in the last 30 years would be this, Harley Davidson & The Marlboro Man (1991) and Beyond the Law (1993).

I was always bummed that Baxley never directed anymore big budget features. I don't know if that was a personal choice or if he just wasn't getting any offers. If the reason is the latter, then we as an audience and the world of action in general really missed out on some great films in the action genre.

After Stone Cold, he stuck strictly to TV Movie's and TV Series, with the occasional DTV film here and there, with the most odd choice being the Christian themed Left Behind III: World at War. Sadly, I can't say that I've actually seen any of his TV or DTV films, but I do plan to at some point if I can ever find them. The last thing he directed was an episode of Human Target in 2011, though IMDB states he has an upcoming project in the works called The Gingerbread Girl.
Posted by robotGEEK at 10:38 AM