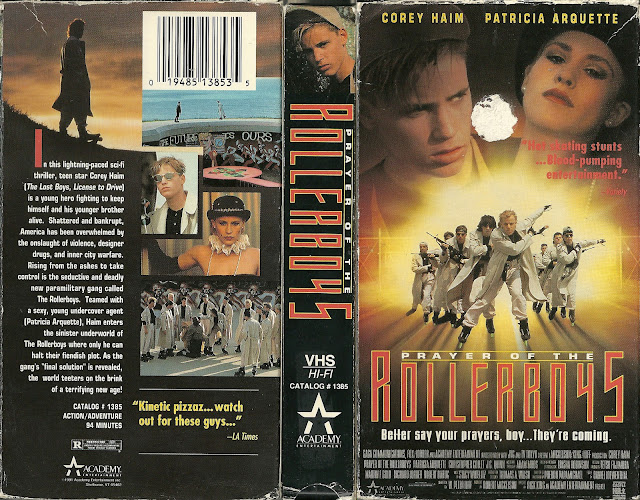 I suppose coming off of a film like Solarbabies, I was going in with some expectations of cheese. I mean, just the idea of this film alone, let alone the title and cover art, lead you to believe it will be somewhat cheesy. At least for me anyway. Okay, I'll admit. I was "hoping" it would be cheesy. There. I said it.

So imagine my surprise to discover that Prayer of the Rollerboys is actually a very competent film. In fact, it's a pretty darn good one to boot. Truthfully it took me a good half hour to really get into it. And I think that's because it wasn't as silly or campy as I was expecting. It threw me off for a bit and I wasn't sure which direction it was going to go. But once I "got it", I have to admit that I enjoyed the ride.

Griffin (Corey Haim) is a pizza delivery boy who is solely taking care of his little brother in the not so distant future. Our government has failed, and chaos reigns. When he runs into an old childhood friend named Gary Lee, his life starts to spiral out of control. Gary is the leader of a gang known as the Rollerboys, and Gary uses his gang to control the entire city. Griffin doesn't want any part of that life, and when the police ask him to go undercover for them to infiltrate the Rollerboys, Griffin accepts as he sees it as a ticket out of the city to protect his brother.

One of the main things you'll notice almost immediately is that this film has a very confident style. Even though the film ultimately didn't end up being the film I was expecting, I can't deny that it looks great. Director Rick King does a great job at making California look dystopian on a budget. It reminded me a lot of how Albert Pyun once shot films. I've never seen any of King's other films, but if this film is any indication, he's got a firm grasp of how to make a picture look good, despite it's budget restraints. 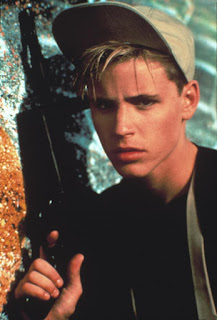 Corey Haim does a good job in the lead as an older brother who's trying to move forward in world that wants him to fail. Watching him onscreen is a bit melancholy. This was only 2 years after License to Drive, and honestly, it's like two totally different people. Though he had been struggling with demons in his personal life for years before this, it somehow looks more evident in this film, and it shows in his performance. He carries the film well though. Just don't ask about his hair.

My one and only real gripe in the entire film would probably have to be Christopher Collet as the main bad dude, Gary Lee. The only other film I ever recall seeing him in was The Manhattan Project (sans bleached mullet) opposite John Lithgow and while he's a fine actor in general, I just didn't buy him as the brutal, violent and manipulative gang leader/villain. He just doesn't come off as believable or likable enough when he's trying to be charming and manipulating. It's a bit of bad miscasting in my honest opinion. He has a great mullet though.

Patricia Arquette made this between breakout roles in ANoES Part 3: Dream Warriors (1987) and True Romance (1990). She's effective, if a bit unmemorable. It's not really anything to do with her performance, but rather the material she has to work with. Either way, she's a nice distraction from the male testosterone that permeates through most of the film.

I'm not going to say it's a great film, because it's not. You really have to be in a certain frame of mind to be able to enjoy something like this. But it's a good film for what it is. It screams the 90's, but in a very serious way, so that may be enough for your enjoyment. Ultimately I found it overall enjoyable. It's shot well, the acting is pretty good, and it never looks or feels cheap. It doesn't quite sell the whole idea about a collapsed government 100%, but it does a good enough job of it. Sadly, it wasn't the 90's rollerblading cheesy good time I was anticipating, but it's not a bad film either. If there's anything that this film will ever be memorable for, it's the fact that both Lost Boys stars Jason Patric and Corey Haim at some point made a rollerblading or rollerskating movie when it was hip to do so. 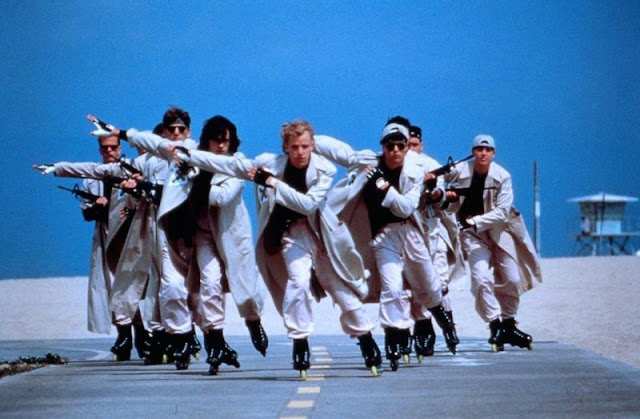 Posted by robotGEEK at 2:17 PM