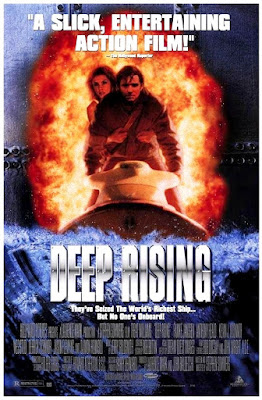 Have you ever seen this film? No? I'm not surprised. Neither had I until just the other day. Maybe it was the terribly amateur promotional material that never caught your eye? Or the fact that it didn't star a big name actor? I mean, I know who Treat Williams is, but my wife had never heard of him. Too bad, because guess what? This is quite frankly one of the most entertaining and fun Creature Feature's ever made.

Deep Rising is about as good a time as you'll ever have watching a film. Really, it just doesn't get any better than this in terms of fun. By combing elements of The Thing, The Deep, Poseidon, and a slew of others, Sommers incorporates action, comedy and horror elements to create a thrilling roller-coaster ride that literally never lets up right from the beginning. And it's because of this that I struggle with the fact that it's not a popular film by any means, and that it probably hasn't ever been discovered by the average moviegoer simply because it looks like a cheap 90's low-budget film, when in fact it's the opposite. A bit goofy for sure, but in a way that works well for the material and not overly done.

A crew of mercenaries hire a boat captain to take them to a destination, no questions asked. When the boat reaches it's destination, a luxury yacht, they find it abandoned, without power and torn to shreds. Once aboard, they soon discover that they're not alone, and worse yet, they're being hunted.

Writer/Director Stephen Sommers may not have a reputation as a quality filmmaker, but I'll be damned if his films aren't entertaining as hell. And sadly, he never really gets the credit he deserves as a competent filmmaker who makes films, while cheesy, that are quite fun. Take for example, Odd Thomas, his last feature film, released in 2013. Simply based on the cover alone, it doesn't look or seem all that interesting. In fact, it sat in my Netflix list forever before finally giving it a watch, only to discover it was a very engaging and endearing comedy/fantasy/horror film that also managed to tug at your heart strings. Deep Rising, a highly enjoyable and spirited homage to monster movies he made all the way back in 1998, a year before hitting it big with his remake of The Mummy in 1999, also suffers from the same issue as Odd Thomas, in that it's just a very mediocre cover that doesn't really sell the film all that well. In fact, the cover to Deep Rising is far worse than Odd Thomas and comes off as a film that would premiere on the Syfy Channel. Only it's not! It's in fact a very well made, and highly enjoyable Creature Feature that despite being made in the late 90's, pulls off some rather impressive effects work, but more importantly, is just a very fun film overall. 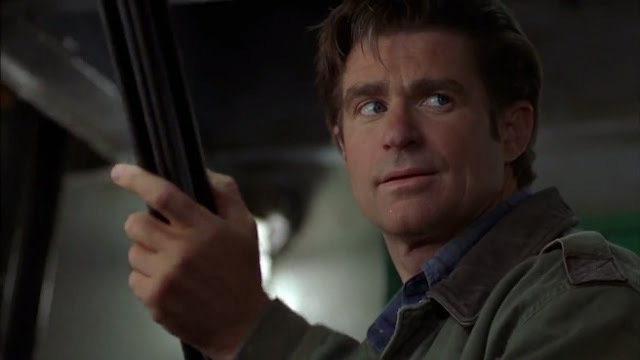 One of the things that I loved about this - among many, many others - was that the cast is so large, and so recognizable that I had a blast picking each and every one of them out. Treat Williams kind of came in at the last minute to replace Harrison Ford, and if this film does anything, it's that it proves Williams should have been given more opportunities like this to lead a big film. He's such a natural at it, and exudes a snarky confidence and charisma that really, you just don't see very often. He's also a badass when the time calls for it.

One of the more interesting things to note about this large eclectic cast is that there isn't a single character to root for in here. In fact, they're all terrible human beings; criminals, thieves and whatnot who are only put into this situation through bad intentions and greed. Watching bad things happen to bad people ends up being surprisingly fun in this film. Along for the ride are a host of regular bad guys and character actors like Wes Studi, Kevin J. O'Connor, Jason Flemyng, Cliff Curtis, Clifton Powell, Trevor Goddard, and Djimon Hounsou that give the film a very 90's "throwback" vibe.

It helps that Rob Bottin (The Thing, Total Recall) is along for the ride to design and create the monster/creature. I must say, for a film that relies solely on CGI to create it, it's done effectively well, even by today's standards. Wisely, they only show bits and pieces of it until the big reveal later, but even then, there's a classiness to it all that only talent like Bottin and Sommers can bring to the table. You'll definitely notice hints of other monster designs, but ultimately it comes off as something all it's own. 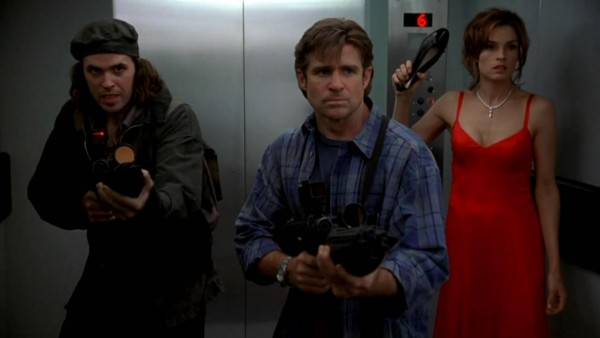 Deep Rising doesn't really offer anything new to the Creature Feature genre, but what it does do and does really well is make a roller-coaster ride of it, when most tend to stick primarily to the horror genre. This one effectively manages to blend several genre's seamlessly together, offering ample amounts of action, gore, excitement, suspense, and laughs, to satisfy any taste, no matter what you're in the mood for. It's all in here. It sounds cheesy, I know, but the movie is cheesy, yet in the absolute best possible way, and if you're a fan of Stephen Sommers films, or just are aware of his particular style of filmmaking in general, then you shouldn't be surprised. It carries all of his usual action/adventure/comedy trademarks, and proves that even confined to a single setting like a luxury yacht, he can  deliver the goods. Deep Rising was far better than I was expecting and a helluva great time.
Posted by robotGEEK at 3:11 PM