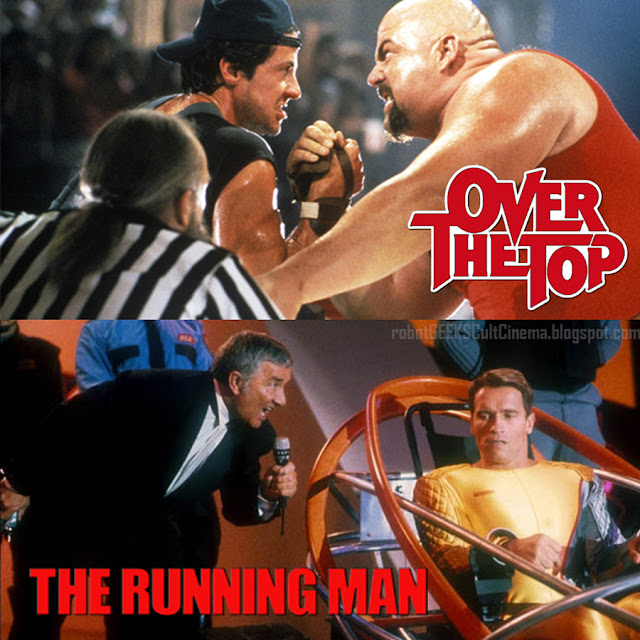 Back in 1987 Stallone and Arnie were both going toe to toe vying for the top spot at the box office. In fact, this was a regular theme between these two giants who would both rule the box office throughout the 80's, the height of their stardom, specifically in the action genre. There were no bigger action stars than these two, and they would continually battle it out for their entire run in the 80's and most of the 90's, until their star power began to wane, paving the way for new action stars like Steven Seagal and Jean-Claude Van Damme.

1987 was a critical year for these two. Stallone had delivered the most successful Rocky film in the entire franchise with Rocky IV in '85, but followed it up with Cobra the following year, which sadly didn't do the type of box office business Cannon Films or Stallone were hoping for. Though it's considered a Stallone classic today (and a personal favorite of mine), back in 1985 it came and went with little fanfare. Stallone was needing a hit, and Cannon Films was really banking on this tale of an arm-wrestling truck driver who is trying to reconnect with his son after the death of his ex-wife, so much so in fact that they gave Stallone his biggest paycheck to date. Unfortunately that also drove up the films production cost to an unheard of 25 million for a film that's essentially a drama, and even with Stallone's star power, the film wasn't able to recover those costs. Ultimately the film bombed big time, thus spiraling Cannon Films further into bankruptcy. 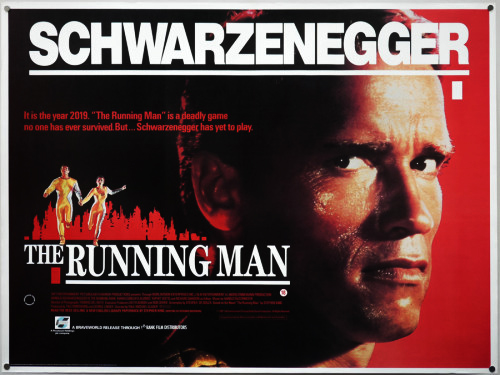 Schwarzenegger was in a better place. 1985 saw the release of one of his biggest and most well loved action films with Commando. But he followed that up the following year in 1986 with Raw Deal, a huge misfire, and a film he only did to finish up his contract with mega-producer Dino De Laurentiis so he could move onto other projects. Even today, Raw Deal never gained any type of cult status and remains one of Arnie's least liked films. Raw Deal suffers from numerous issues, most of which boils down to Schwarzenegger just being terribly miscast in the role. Still, it does have it's fair share of fans though - some do actually enjoy it. I recently gave it another shot and still feel the same way I did all these years - I just don't like it. But then he released Predator in 1987, a true sci-fi/action classic in every way imaginable, and one of the biggest hits of his career at the time. So he was in no need for a safety net at this point; Predator completely made up for Raw Deal in every sense of the word. Surprisingly, this year saw the release of another film of his, which oddly enough, rarely ever happened in Hollywood. In the 90's this would be commonplace, with action stars delivering multiple films in a single year. But back in the 80's, that was not the case. On the home video market today though, it's the norm.

The Running Man, based on a short story by Stephen King under the alias Richard Bachman, was supposed to be another mega-blockbuster for Arnold, a futuristic sci-fi action film that would cement his status as king of the box office. But unfortunately the film was suffering from behind-the-scenes problems right from the beginning, which somehow translated equally into the final product, resulting in a film that bombed at the box office in the same way Sly's Over The Top did. In fact, I specifically remember an interview with Schwarzenegger who took full responsibility for it's failure, saying that he knows the public expects better of him and he would not let them down again. While The Running Man did turn a small profit, unlike Over The Top, it was not the return the studio, producers, and Arnold himself were expecting, with the negative critical reaction pretty much being the nail in the coffin. 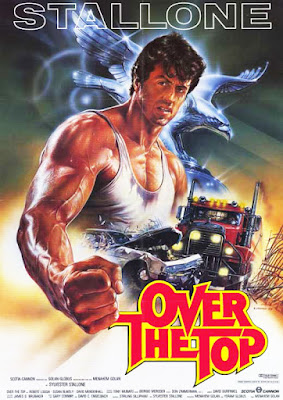 The main issue critics and filmgoers had with both of these films is that they felt they were cheesy, and they would be right. Both of these films are incredibly cheesy in a very 80's kind of way, yet today, we celebrate them for that very thing. I've recently revisited both of these films and found myself enjoying them for the very reasons they were maligned in the first place. In fact, if I am to be completely honest, I did not like either of these films for the majority of the 30 years since their original releases. The Running Man I revisited about a year or two ago and just fell in love with. Not again, but for the very first time. I loved it's Made-for-TV look and feel, and it's insatiably cheesy atmosphere and endless one-liners easily make this a standout among Arnie's filmography. In fact, upon revisiting this, it's become an essential piece of classic Schwarzenegger for me, and a film I've revisited often since then.

When Netflix offered Over The Top as part of their lineup some months back, I took the opportunity to give it another whirl because I just never connected with it before. So I really didn't know what to expect going in, but I was willing to give it another shot and have an open mind. My reaction to the film when it was over was not at all what I was expecting. In a nutshell, I fucking loved it. I loved it so much. The Running Man was cheesy, but this was insanely cheesy. So much more cheesy in every way imaginable and it was amazing. Yes it's a drama, but it's so utterly ridiculous at nearly every turn it becomes legendary. Yes, you read that right. Over The Top, a arm-wrestling road trip love story about a trucker reconnecting with his son is a legendary slice of 80's cheese and it's magnificent.


At their core, they each offer something totally and tonally different, yet entertain in the exact same way because while they will never be a highlight in either of their career's, they're ability to perfectly capture a very 80's cheesy quality is insurmountable. In 1987 they were considered flops, 30 years later they're considered cult classics, and time has been extremely kind to these two behemoths of 80's goodness.

These two films were only very slight blemishes on their careers, because they would both go on to recover nicely. Arnold would release Twins the following year, a comedy no less, and would be one of his biggest hits, much to the surprise of the industry. Sly would have to work a bit harder. His next film would be Rambo III, my favorite in the series, but would also flop, not due to it being a bad film, but rather the very definition of bad timing as, much like in the film, Russia was in fact invading Afghanistan at the time. Stallone would have to hit the ground running, often delivering 2 films a year, some great and some that flew under the radar, but none would be the mega-blockbuster he needed to dethrone Schwarzenegger as the reigning champ at the box office. Sly delivered more films, but Arnold's made more money.

If I had to choose which I loved more between these two films, I don't think I could. I love them both equally for very different reasons. They both deliver on a very special unique quality that made the mid 1980's so special, and if anything, prove that even at their worst, these two films have withstood the test of time, for better or worse, to become certified cult classics. Which is your favorite?
Posted by robotGEEK at 12:20 PM