Blu-Ray Essentials: Band of the Hand 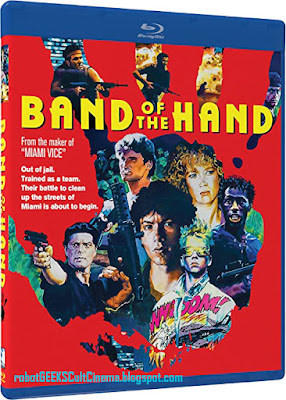 This is a month late, but just in case you were not already aware, you can finally pick up this obscure 80's classic on Blu Ray courtesy of Mill Creek. Now, this is kind of a big deal because outside of it's one and only VHS release and an OOP DVD here in the U.S., this has never gotten any kind of love in terms of releases. So not only are you getting a significant upgrade, but you'll also get to finally see it in widescreen for the very first time in all of the world's combined history of existence! Other than when it was screened in theaters of course. Unless Amazon is streaming it in its original aspect ratio too? Nevermind. Don't listen to me.

Now, being as it's Mill Creek, don't expect a gorgeous transfer. It's good, and an improvement over the VHS tape, but it won't blow you away either. And sadly, there are zero special features included. It's literally just the film and that's it. BUT, and here's the best part, it's INSANELY cheap. I'm talking that even when you combine shipping, you'll "still" pay less than $10 for this bad boy. I got mine on eBay for $7.88, and that's with shipping included.

So I literally only saw this film for the very first time a few months ago after randomly coming across the VHS at my local thrift shop. It blew my mind. It's an insane ride of pure 80's cheesey goodness and I'm shocked that it doesn't have a much bigger following. It constantly shifted genre's, themes and story's so often that I don't even know how to begin to describe it, other than it's just fucking awesome. It's an action film, a survivalist film, a drama, a thriller, a revenge film, a cops and robbers film and an 80's neon colored tour de force of style. Produced by Michael Mann (Miami Vice, Manhunter, Thief, Heat), Directed by Paul Michael Glaser (The Running Man), and starring a slew of recognizable faces, who were barely up and coming at the time, this is a MUST OWN for your Blu Ray collection, if nothing else, then to be blown away by nostalgia.

If you care to read my review on this, you can check it out HERE.