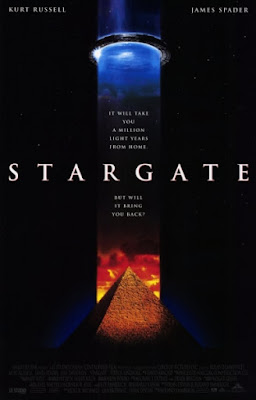 You might be surprised to learn that I literally haven't seen this since it first came out in theaters. Gasp! I know. I have no excuse really. If you know me, then you know that these kinds of films are the ones I am usually a big fan of, yet for some reason I kind of just forgot about this one. But recently my wife and I had gotten into a discussion about Egypt, and it reminded me of this, and I thought it would be a fun film to revisit for myself, and to get to show to her for the very first time. Though there have been several releases of this on DVD and Blu Ray, I "unwisely" decided on the Extended Cut 2007 Blu Ray release since it was insanely cheap, a decision I ultimately regret. So let's dig in.

What can I say? This was a blast from start to finish. It's easily one of the best examples of these types of films, and best of all, it's aged tremendously well since it's 1994 release. And that really says a lot, especially these days. The idea that this film was made 23 years ago using a host of practical effects before CGI had completely taken over, yet does the job far better says a lot about the state of effects work today. And this is one of the charming things about this film and why it works so well. For a film that relies so heavily on effects work, it's done superbly well in an old school way, and it never comes off as looking or feeling cheap. In fact, so impressed was I with everything that my first thought was how the world of film really missed a great opportunity in putting a Dune remake in Roland Emmerich's hands back in the mid 90's. That would have been the prime time to do it cheaply and effectively, and Emmerich was really hitting his groove with practical effects work on a grande visual scale.

As I sat back and absorbed this highly enjoyable 90's sci-fi tale, I was also struck by how fantastic everything looked aesthetically. Emmerich definitely had a very specific modus operandi back then, which is clearly evident in his early films like Moon 44, Universal Soldier, Stargate and Independance Day. It began to alter a bit with Godzilla in 1998, only for him to go back to the former with The Patriot in 2000. But it didn't last, as he adopted a less impressive and less "trademark" methodology with his big budget effects heavy disaster pics The Day After Tomorrow, 10,000 B.C. and 2014. But it's with these earlier efforts that he really displayed an incredible eye for framing and structuring a scene. Even with the sequences that take place out in the desert, which you would think would be difficult without much of anything to work with, his ability to composite a shot is impeccable. What blew my mind even more were these same moments outside, on the desert planet during a battle, with mini ships flying overhead while shooting lazers at our protagonists. It was practically done, and looked real. How did he do that?!

I was worried that time would not be kind to this film, especially knowing that this was pre-CGI. I mean, there is a bit of that in here, like when the Egyptian masks come off by way of folding away, but it's not overly done, and what is in here isn't terrible. But they are dated. Luckily the CGI is kept to a minimum, and the majority of them are done utilizing old school model work, camera tricks and composite shots, and it looks fucking amazing. Even when you take the effects and visual aspect of this out, it's still a very fun and engaging film. It never skips a beat and never takes itself too seriously, which tends to put a damper on films when they think they're too smart and take all the fun out of the experience. It tends to happen more often than you think.

Roland Emmerich and writing/producing partner Dean Devlin really needed a breakout hit; something that would really put them on the map. Their previous film, Universal Soldier, while solid and technically profitable, didn't really blow audiences away and wasn't the big runaway action hit they were banking on. Still, it wasn't a flop either and opened the doors for the duo to continue making bigger and better films, which would in fact bring them to Stargate just 2 years later. Stargate not only opened those doors for them, but it blew them wide open and literally created an entire new franchise. While there weren't anymore Stargate sequels (surprisingly), there were plenty of television series such as Stargate: SG1, Stargate: Atlantis, and Stargate: SGU. So the Stargate franchise has been continuously busy and lucrative since this first entry into the Stargate universe. 2 years later Emmerich and Devlin would indeed have that mega-blockbuster they had always wanted with Independence Day in 1996, which would simultaneously create a box office star out of Will Smith.

I really can't praise this film's fun factor enough. Engrossing, sometimes funny, sometimes exciting, and all around fascinating, combined with a stellar cast, a spirited script by Emmerich and Devlin, and Emmerich's stylish direction elevate this to superior levels of awesome. These type of films were plentiful back in the 90's, with a good majority of them just being okay. Not a lot of them are so good that they ended up creating a whole new franchise, or better yet, leave a lasting impression and legacy the way this one has. Don't get me wrong. It's not a masterpiece by any means. In fact, I know people who feel it's not all it's cracked up to be, or that it hasn't aged well, and I can see how they would feel that way. It's a very valid sentiment. For my personal taste though, I find it an exceedingly well made and fun film. It's better than you remember it being and it's far more entertaining than it has any right to be.

Which Blu Ray To Choose:
As I mentioned before, I watched this on the 2007 Extended Cut Blu Ray release. I got this release because it was insanely cheap. I'm talking under $5, and the product itself is a reflection of that cheap price. There are no extra's included, making it as bare-bones as could possibly be. The picture quality is decent, until it gets to the moments that take place inside the dark pyramid. Suddenly the quality drops by major degrees and it becomes frustratingly grainy for the most part. Any other scene is fine, it's only noticeable when it comes to these specific moments in the film. I would strongly recommend picking up the 2009 15th Anniversary Edition on Blu Ray, which I intend to do when I upgrade eventually. This edition comes with a plethora of extra's including commentaries, trailers, documentary's and more, and the picture quality should be an improvement over the previous release. 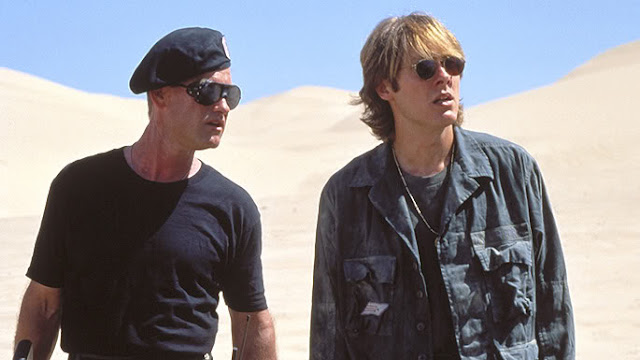