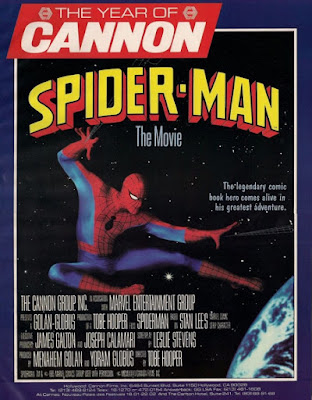 Back in the 80's during Cannon Films reign as one of the most prolific companies in the business, they were able to secure the rights to one of Marvel's most popular characters, Spider-Man. Back then, that was a lot easier and cheaper to do. Just look at Marvel's early track record with the low-budget incarnations of The Punisher, Captain America and The Fantastic Four, and Spider-Man was soon to follow. Much like their other films, Cannon would get the gears grinding early, before the films would actually ever get made, hoping to drum up enough interest to secure future deals that would ultimately pay for the film before the camera's ever started rolling. They would accomplish this by making mock-up posters, ads, and trailers. So that's what we have here, a mock-up trailer that doesn't show any actual footage (none was filmed), yet does a great job at selling the product anyway, which was their specialty. I think for me what really "sells" it is the use of the go-to guy for voice-over work, Don LaFontaine. He narrated all the trailers back in the 80's to great effect.

What's interesting to note is that with the trade paper ads, they had listed none other than Tobe Hooper as director, which would have been awesome. But the trailer lists Joseph Zito (Invasion USA, Friday the 13th: The Final Chapter), which also would have been great. I'd also heard at one time legendary cult director Albert Pyun was also attached, and who would then follow that up with the Masters of the Universe sequel, of which sets had already been constructed. We all know the story though. After the disasters Superman IV: The Quest for Peace and Masters of the Universe, Cannon pretty much collapsed immediately and all future projects were scrapped. Still, even though we all know that the effects work needed would more than likely have been terrible, the idea of a Cannon produced, Tobe Hooper or Joseph Zito directed Spider-Man flick circa the 1980's just fascinates me.

In any case, we do have this very low-grade quality trailer, so without further ado, I give you Cannon Film's Spider-Man trailer.

Posted by robotGEEK at 1:56 PM