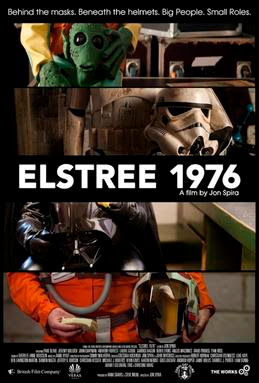 One of the things I love about Netflix is randomly coming across films or documentaries I never would have heard of otherwise. They've become a platform for filmmakers and documentary filmmakers who pour their hearts and sweat into their passion projects, only to rarely get the chance to see the light of day or find an audience. But in the day of streaming, and most importantly sites like Netflix and Hulu, these little films do thankfully find an audience, which brings us to this gem of a discovery in the documentary genre.

Elstree 1976 tells the story of all those little bit players, some who have gone onto cult status fame, while others still remain as obscure today as they were back in 1976, in the original Star Wars. Here you get to get up close and personal with these character actors and background players who thought they were going in for a random low-budget sci-fi film that most assumed would never even get released, only to go on in the history books as one of the most profitable and most popular films of all time. They share their experiences working on the first Star Wars film as well as their characters enduring legacy, even though at the time they thought anything but.

While the documentary is an absolute Must-Watch, especially for the Star Wars fan, I found it to take a good half hour to get to the good stuff, and that it ran a bit longer than it needed to. Regardless, it's a fun Sunday afternoon watch for the casual film buff, but an even more absorbing and fascinating experience if you're a Star Wars fan.

You can currently find Elstree 1976 on Netflix...
Posted by robotGEEK at 8:32 PM