Last week I began contributing my reviews to the local entertainment site Ouch My Ego!, with my review for the excellent Korean Folk Horror film The Wailing being my second. Here it is as originally published on Ouch My Ego! on 2/9/2017:

It's an extremely rare thing for a new film to come out and really leave an impression on me. Since seeing this film the other night, I literally have not been able to stop thinking about it, and I verily can't remember the last time that happened. It stays with you, for better or for worse. 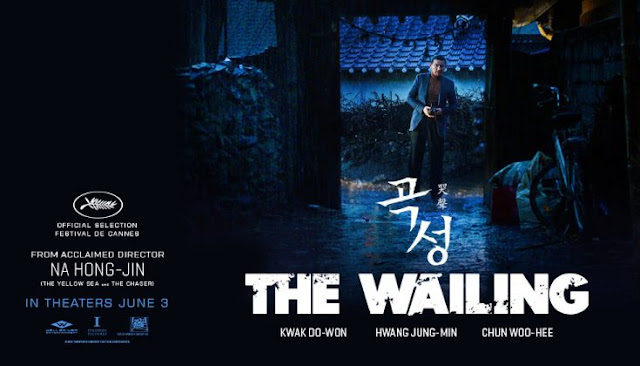 I knew nothing about this going in, other than it's a big hit with the "folk horror" community. But in terms of story, I had no clue what to expect. What's interesting to note though is that after I saw it, all of a sudden people were commenting on how much they loved it, or had seen it a while ago, yet I had no idea this even existed until just a few days ago. But you know, that's just another one of the many wonderful surprises about this immensely absorbing Korean Horror film that a good 99% of any horror film from any part of the planet can't deliver.

A series of random murders by seemingly normal people in a small village has the police and public stumped and on edge. There seems to be no cause and no relation from one another, yet they continue. When a local incompetent police officer gets involved on the cases, he unwittingly becomes entangled in the fold without even knowing it, and what he discovers is unlike anything he nor the village has ever encountered before.

The Wailing is one of the most intense, beautiful, brutal and engrossing horror films I've had the pleasure of seeing. I shouldn't be surprised, as a good Korean film tends to have that affect on me. The Man From Nowhere is a great example of that, but still, the horror genre hasn't really left much of an impression on me when it comes to Korea. But this one just kind of came out of nowhere and blew me away. It's also a starkly contrasting film. The juxtaposition of the beautiful images of the gorgeous landscape and scenery against moments of savagery and brutality are jarring, yet that's one of the things that makes this film such a breath of fresh air. It's different, but in a startling beautiful way.

Korean writer/director Hong-jin Na has only 3 films under his belt, starting with 2008's The Chaser, an action/crime/thriller that firmly cemented his status as a solid standout in an overcrowded market. Each of his 3 films have left a strong and lasting impression, and each carries a strong tension filled atmosphere, whether he plays with action, horror or the thriller genre. He's arguably one of the more gifted writer/director's to come out of there in the last 20 years, and each new film only confirms his status as an important, talented and skillful filmmaker in any genre. He's definitely one to keep an eye on and I'm curious to see where he goes from here.

By now I'm sure you've noticed that I haven't revealed much about the actual plot itself, other than the very brief synopsis above. That's because truthfully, it's near impossible to not give too much away and possibly spoil it for you. It really is best to go in cold, not knowing much other than the very basic elements to the story. But trust me, there is so much more to it. It's a highly complex story with layers of information that you will no doubt be simmering on for some time. It's the kind of film you will want to discuss with others immediately afterwards, because no 2 interpretations are alike. I myself have been having regular conversations about it with others ever since I've seen it, and I still can't get enough. 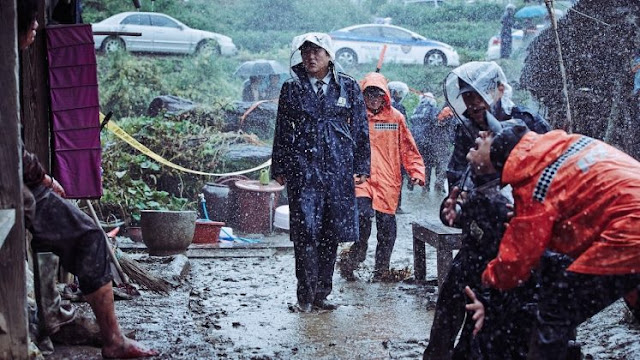 The tone shifts regularly. While it is indeed a dark film right from the beginning, there are moments that are light, where humor, albeit brief, undercuts the razor sharp intensity. It's actually a welcome addition, but these moments are few and far between. The film begins as a thriller, grabbing you right from the get-go, but as it progresses, becomes more and more a horror film. And not just any type of horror film either. It shifts into a very specific and all too rare type known as folk horror and it does it masterfully.

The casting is really impressive. Jun Kunimura plays the character known as "The Japanese Man". He has a very familiar face, so if you've seen enough films as much as I have, you've surely seen him in something. In fact, I just saw him recently in Godzilla: Final Wars, but he's also in the new Shin Godzilla as well. Most, I'm sure, will recognize him as Boss Tanaka in the Kill Bill films. But his performance in this is something quite unique because he never utters a single word for a good 99% of the film. He speaks through his actions, and has to convey emotions and character development simply through his actions and reactions. It's all written on his aged and worn face and really something to see. The little girl Hyo-jin, played by Kwan-hee Kim also makes a rather impressive addition. Her character, and most importantly, her performance, sneaks up on you in a way that you don't expect, and it was surprising and refreshing at the same time. The real standout for me though is the main protagonist of the film, the cop and father to the little girl, played by Do-won Kwak (The Man From Nowhere). It's fascinating to see his progression from bumbling cop to a tormented and vengeful man willing to do anything it takes to do that he feels is right. It's a harrowing journey that we take along with him that is sometimes difficult to endure or understand.

What's interesting to note is that of the 3 production companies behind this, 20th Century Fox is the only one with any history. Ivanhoe Pictures and Side Mirror are virtually new to the field, with this film being the only film Side Mirror has even released. I'm interested to see if this film is any indication as to the future of these companies and what direction they plan to take in terms of quality and genre. 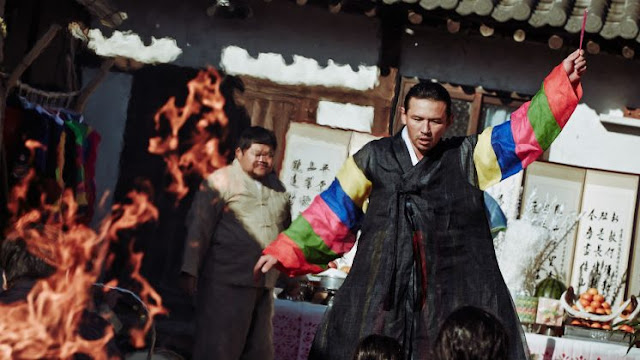 I really can't praise this film enough. It's a film that manages to be both heartbreaking and entertaining, beautiful and brutal, stunning and shocking, all at the same time. It will leave you asking questions when it's all said and done, but it will stay with you, for days on end. That, to me, is the definition of a great film.

The Wailing is currently streaming on Netflix.
Posted by robotGEEK at 9:32 AM